What would you do if all the lights went out and they never came back on?  That is a question that the new NBC series “Revolution” asks, but most people have no idea that a similar thing could happen in real life at any moment.  A single gigantic electromagnetic pulse over the central United States could potentially fry most of the electronics from coast to coast if it was powerful enough.  This could occur in a couple of different ways.  If a powerful nuclear weapon was exploded at a high enough altitude, it could produce an electromagnetic pulse powerful enough to knock out electronics all over the country.  Alternatively, a massive solar storm could potentially cause a similar phenomenon to happen just about anywhere on the planet without much warning.  Of course not all EMP events are created equal.  An electromagnetic pulse can range from a minor inconvenience to a civilization-killing event.  It just depends on how powerful it is.  But in the worst case scenario, we could be facing a situation where our electrical grids have been fried, there is no heat for our homes, our computers don’t work, the Internet does not work, our cell phones do not work, there are no more banking records, nobody can use credit cards anymore, hospitals are unable to function, nobody can pump gas, and supermarkets cannot operate because there is no power and no refrigeration.  Basically, we would witness the complete and total collapse of the economy.  According to a government commission that looked into these things, approximately two-thirds of the U.S. population would die from starvation, disease and societal chaos within one year of a massive EMP attack.  It would be a disaster unlike anything we have ever seen before in U.S. history.

Most Americans are totally clueless about what an EMP attack could do to this nation, but the threat is very real.  There was even a congressional commission that studied the potential effects of an EMP attack on the United States for eight years…

The US Congress in 2000 established the Congressional Commission to Assess the Threat to the United States from Electromagnetic Pulse (EMP) Attack. In 2004, the committee produced a 70-page executive summary on the EMP threat, and it issued a final report on the matter in 2008. According to the report, “several potential adversaries have or can acquire the capability to attack the United States with a high-altitude nuclear weapon-generated electromagnetic pulse (EMP). A determined adversary can achieve an EMP attack capability without having a high level of sophistication.”

Dr. William Graham was the chairman of that commission, and he says that an EMP attack could knock the United States back into the 1800s in just a single moment…

An EMP attack “could not only take down power grids, which are fragile anyway in this country, and telecommunications networks, and financial networks, and traffic controls and many other things, but in addition, there is a very close interrelationship among those national infrastructure capabilities,” Graham says.

Life after an EMP attack “would probably be something that you might imagine life to be like around the late 1800s but with several times the population we had in those days, and without the ability of the country to support and sustain all those people,” Graham says. “They wouldn’t have power. Food supplies would be greatly taken out by the lack of transportation, telecommunication, power for refrigeration and so on.”

Unfortunately, very few of us are equipped to survive in such an environment.  We have become incredibly dependent on technology, and most Americans would have no idea how to do something as simple as growing their own food.  Most people would be in a very serious amount of trouble in a very short period of time.

The first 24 – 48 hours after such an occurrence will lead to confusion among the general population as traditional news acquisition sources like television, radio and cell phone networks will be non-functional.

Within a matter of days, once people realize the power might not be coming back on and grocery store shelves start emptying, the entire system will begin to delve into chaos.

Within 30 days a mass die off will have begun as food supplies dwindle, looters and gangs turn to violent extremes, medicine can’t be restocked and water pump stations fail.

Are you prepared for such an event?

And actually, high altitude nuclear explosions and solar storms are not the only things that could produce sizable EMP bursts.

For example, the U.S. military has developed “a directed electromagnetic pulse gun” that can take out all electronics within a limited area.  This kind of weapon can be fired from a plane, a cruise missile or even a drone.  The following is from a recent WND article…

A pre-programmed cruise missile not too different from a drone has been proven to be capable of blasting out an EMP-type microwave that was able to destroy personal computers and electrical systems inside a building over which it was flying.

The U.S. Air Force and its contractor Boeing have created the High-powered Microwave Advanced Missile Project, or CHAMP, which was just tested over a Utah desert.

Other nations such as Russia and China are busy developing similar weapons.  The ability to instantly take out the electronics of the enemy would be a very powerful advantage.

Even North Korea has been working on this kind of technology.  According to Newsmax, it is believed that they may have tested a “Super-EMP” weapon back in 2009…

North Korea’s last round of tests, conducted in May 2009, appear to have included a “super-EMP” weapon, capable of emitting enough gamma rays to disable the electric power grid across most of the lower 48 states

As this technology becomes more widespread, it will soon be accessible to just about everyone.  You don’t actually need a nuclear weapon to set off a massive electromagnetic pulse.  A non-nuclear pulse generator can do the same thing.  If you set one off next to a power station you could potentially take out the electrical grid for an entire region.

Terrorist groups and lone wolf crazies could even use portable radio frequency weapons to do a tremendous amount of electromagnetic damage over a more limited area.  The following is from a recent article by F. Michael Maloof…

Such an individual with a penchant for electronics can pull together components from a Radio Shack or electronic store – even order the components off of selected Internet websites – and fashion a radio frequency, or RF, weapon.

As microprocessors become smaller but more sophisticated, they are even more susceptible to an RF pulse. The high power microwave from an RF weapon produces a short, very high power pulse, said to be billions of watts in a nanosecond, or billionths of a second.

This so-called burst of electromagnetic waves in the gigahertz microwave frequency band can melt electrical circuitry and damage integrated circuits, causing them to fail.

Constructing a radio frequency weapon is not that difficult.  In fact, you can find instructions for how to build them on the Internet.

People need to realize that we live in a world where technology is absolutely exploding and we are dealing with threats that previous generations never even dreamed of.  As the world becomes increasingly unstable, it is inevitable that these kinds of weapons will be used.

It is only a matter of time.

What will life look like after an EMP weapon is used?

That is something to think about.

And we also need to keep watching the sun.  It could produce a massive electromagnetic pulse at literally any moment.  As I have written about previously, scientists tell us that it is only a matter of time before we are hit with a technology-crippling solar super storm.

Most people don’t even realize that the massive solar storm of 1859 fried telegraph machines all over Europe and North America.  If such a storm hit us today, the damage would potentially be in the trillions of dollars.  The following is from a recent New York Times article…

A powerful solar (or “geomagnetic”) storm has the potential to simultaneously damage multiple transformers in the electricity grid and perhaps even bring down large sections of it, affecting upwards of a hundred million people in the United States for many months, if not years.

These huge transformers are expensive and difficult to replace, and not many are stockpiled in the United States for an emergency. In the worst case, the impact would be devastating: An outage could cost a few trillion dollars, with full recovery taking years. Not only would parts of the grid be compromised, but telephone networks, undersea cables, satellites and railroads also would be affected.

A 2008 National Academy of Sciences study warned that “because of the interconnectedness of critical infrastructures in modern society,” the “collateral effects of a longer-term outage” would likely include “disruption of the transportation, communication, banking and finance systems, and government services; the breakdown of the distribution of potable water owing to pump failure; and the loss of perishable foods and medications because of lack of refrigeration.”

By the way, 2013 is the peak of the current solar cycle.  So we are moving into a time period when conditions will be very favorable for solar storms.

Let us hope that we are never hit with a massive electromagnetic pulse that is strong enough to take out all of our electronics.

But if it did happen, and all the lights went out for good, what would you do? 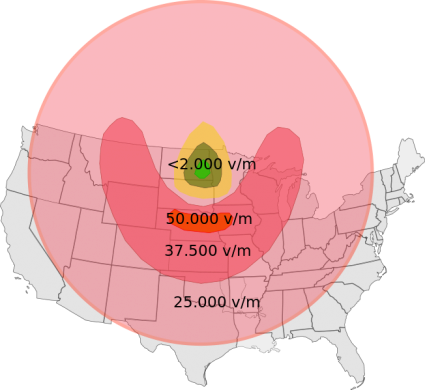