An important update to the West Virginia water crisis and a FREE water safety webinar!

A few days ago I posted an account of what life was like when hundreds of thousands of people in West Virginia discovered just how tainted their city water was. They couldn’t drink it, use it for cooking, couldn’t even touch it! You can read that story here and one mans action through it here.

Glenn Meder, of Survival Still, is a nationally known expert when it comes to water safety, and he wrote an article about the contaminant found in the West Virginia water and how families can cope if a similar event happens in their city.

Keep in mind. Charleston, West Virginia, is a small city of fewer than 60,000 people and the tainted water affected another few hundred thousands living in outlying areas. But what if this happens someday in Los Angeles? Or Dallas? Or any other huge city? It would also impact surrounding communities that rely on that city’s water!

That would be a world class crisis, to be sure, and of course, local and federal authorities would be overwhelmed. As always, you and I are the first line of defense for our families.

You can learn exactly how you can keep your own family safe in these types of crises in a free webinar that Glenn is presenting tomorrow night, Wednesday, February 5, at 7 p.m. CT. I learned so much the first time I heard this presentation that I never knew before, even with all the research I did when I wrote my book!

Click HERE to register for the webinar, but if you forget to register, you can pop in and enjoy the presentation anyway!

And now for Glenn’s article…

I have received a number of questions from people regarding the recent chemical spill in West Virginia. I would like to go over some of the facts about the spill and talk about what you can do to protect your family from this situation and future chemical spills (yes, it will happen again). 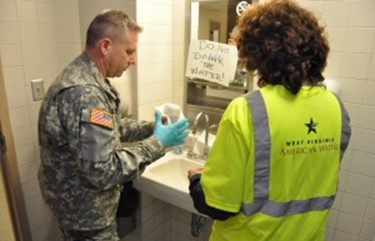 image by The National Guard

Before I get into the article I would like to make a quick statement to our customers. While we have not tested the Survival Still against MCHM, we have examined the characteristics of the chemical and WE ARE CONFIDENT THAT THE SURVIVAL STILL WILL REMOVE THE CHEMICAL. Please keep reading to see additional advice.

On January 9, 2014, 7,500 gallons of 4-methylcyclohexane methanol, or MCHM leaked into the Elk River near Charleston, West Virginia. State and federal agencies issued a state of emergency and ordered 300,000 West Virginia residents not to drink or use tap water for any purpose other than flushing toilets.

MCHM is a foaming agent used in the coal preparation process. Unfortunately, there is simply not a lot of information available about this chemical. The fact is that no one knows what the health effects of this chemical are! Richard Denison, Ph.D., a Senior Scientist at the Environmental Health Fund says this, “How, you might well ask, is this possible?  How can a chemical in active production and use – and now being released into the environment and exposing people – be on the market without any publicly released hazard data or evidence of its safety?”

He goes on to explain that, “The sad truth is this chemical is one of tens of thousands of chemicals on the market today with little or no safety data.  MCHM is one of the 62,000 chemicals that were already in use when TSCA, our nation’s main chemical safety law, was passed in 1976.  All of these chemicals were grandfathered by TSCA:  That means they were simply presumed to be safe, and EPA was given no mandate to determine whether they are actually safe.  Even to require testing of these chemicals under TSCA, EPA must first provide evidence that the chemical may pose a risk – a toxic Catch-22.”

Without this data, all we can do is look at the chemical structure and chemical characteristics and draw some conclusions.

SECOND, without sufficient toxicity data, I believe it is safe to assume a maximum safety level of 5 parts per billion for organic compounds. Again, this is speculation. It could be much more dangerous than this, or it might be less potent.

THIRD, it seems that there have been some corrections in the data after it has been released. For example, see how this quote from the Environmental Defense Fund has been modified, “How can a chemical in active production and use – and now being released into the environment and exposing people – be on the market without any [ADDED 1/12/14: publicly available] hazard data or evidence of its safety?

This change makes it apparent that there is safety data on this chemical, but that it is not publically available. Why would it not be publicly available? This makes me think that it may be quite scary.

The obvious question is, “How can we protect ourselves from this chemical?”

My answer to this question will be different than the government’s answer. From my experience, the government ALWAYS wants to downplay the danger. Keeping people calm is their top concern, followed closely by protecting the local economy. I approach it from a different perspective. I always ask myself, what advice would give to a loved one or a close friend?

How long do I think you should take extra precautions? Again it’s hard to say. I would give it a month or two so that people have time to really investigate it and so you can separate truth from propaganda.

LEARN more from Glenn Meder about safe water for your family by attending a free webinar, on Wednesday, February 5, 7 p.m.  Click HERE to pre-register.