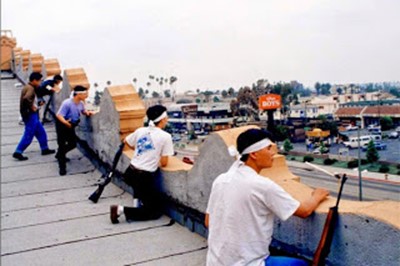 Korean merchants, Los Angeles Riots, 1992. “I don’t know if I am wrong or not. People say I am wrong. What am I going to do? Just sit down and die? I am going to protect my store and my family and myself.”

As Baltimore erupts in violence, and Mayor Stephanie Rawlings-Blake promises a safe haven for destroyers (thwarted only by the occasional armed citizen protecting life and property where the police fear to tread), an inescapable observation strikes. High-profile shootings of black males continue to occur in cities where “progressive” Democrats run things. Yet in spite of that, they embrace “gun control,” that is, a system where police are the “only ones” trusted to keep and bear arms. . .

None of us can foresee the future and predictions are always dicey things to make, but if I had to venture one, I’d say U.S. cities are in for an interesting summer. If that’s the case, we shouldn’t be surprised to see members of the productive sector, who in turn will soon come to understand the “authorities” are useless at providing protection, reapplying old lessons learned from when Korean merchants refused to stand by while their livelihoods went up in flames.

For background on the Korean grocers for those too young at the time to remember see: Pocket of Tension; A Target of Rioters, Koreatown Is Bitter, Armed and Determined

“I want to make it clear that we didn’t open fire first,” said David Joo, manager of the gun shop. “At that time, four police cars were there. Somebody started to shoot at us. The L.A.P.D. ran away in half a second. I never saw such a fast escape. I was pretty disappointed.”