Reports are coming in from cities around the United States where flyers are being put up announcing “The Purge” and saying “Get Your Squad Ready!”  They say “The Purge” will begin on August 31st!  It’s also going out on Instagram, Facebook and other social media! 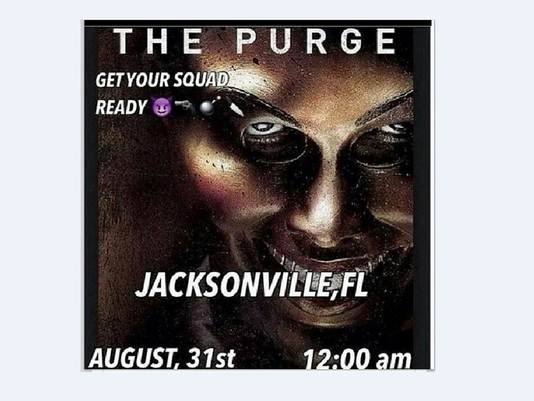 Where I am (Louisville, KY) the threats of a violent crime outbreak for tonight and other dates going forward — based on the movie “The Purge” — are being taken seriously by police. 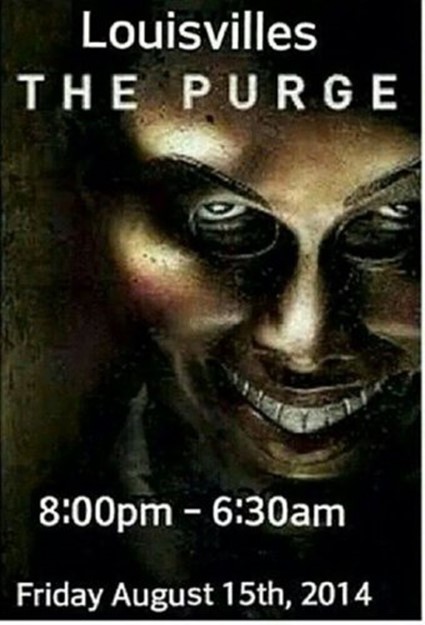 For those that don’t know, “The Purge” is a movie series that has so far had two movies – “The Purge” and “The Purge Anarchy”.  In the movies, the government allows 12 hours where any crime is legal.  You can murder anybody in those 12 hours (7pm to 7am) and do any kind of crime and it’s perfectly legal!  Of course no emergency services will be available during the purge hours so they advise you to get off the streets if you’re not purging this year!  You can use weapons of Class 4 or lower during the purge.  The only people that you can’t murder are government employees of ranking 10 who are immune to the purge.  This was all setup by “The New Founding Fathers” who said that the yearly purge was necessary to “Release the Beast”, keep full employment and to bring about a renewed America!

Could it be that our society is so dumbed down and evil now that many gang bangers could go out and copycat the movie and start killing people!

Police in both Louisville and Jeffersonville, Ind., said they are aware of the “Louisville Purge” threats circulating on Twitter and will have officers ready to respond.

Louisville police spokesman Sgt. Phil Russell said the police “take any threat that would incite violence on our community seriously.”

POLL: What image describes your feeling about “Louisville Purge”

He said their investigation has not identified any specific threats; they have only come across general information that goes along with crime that happened in the movie.

However, Russell said with the trend in the nation of mob violence and violent outbreaks, “it would be prudent for us to monitor it and to be ready for any possibility.”

As reported  by Connie Leonard of Wave 3 News, awareness of random violence was heightened beginning with a wave of violent crime beginning with theMarch 22 attackon the Big Four Bridge, in which a group of teenagers beat and kicked a man in the presence of his family without provocation. The violence continued seemingly aimlessly throughout the downtown area, captured on surveillance video. After a leaked FBI memo suggested planned gang violence might take place two weeks later, the LMPD placed additional officers at events like Thunder over Louisville and the Pegasus Parade. No actual planned violence took place.

Russell said he doesn’t know if the intent of the original poster of the “Louisville Purge” idea — which says the purge will take place from 8 p.m. Friday until 6:30 a.m. Saturday — was to be taken seriously. But now the police have to watch out for any criminals who might use it as a catalyst to exact violence in the community.

He said a lot of officers were already supposed to be on patrol Friday for various other events, such as the Kentucky State Fair, so the department will be adequately staffed and prepared.

Lynch said the department decided to beef up patrols and develop contingency plans in case something did happen.

“In law enforcement, we have to take all threats serious,” he said.

Both Jeffersonville and Louisville police are encouraging anyone who sees something suspicious or witnesses a crime to report it.

As reported by WLKY, Louisville Metropolitan Police report that posters and fliers have sprung up advertising that a ‘Purge’ crime spree would be in effect on Friday from 8:30 pm to Saturday at 6:30 am for residents in Kentucky’s largest city. Louisville MPD released a statement on the posters and fliers assuring residents that the department will be ready if there are any sort of mass disturbances.

Alright, all I can say is this is another reason to take you, your family and friends safety in your own hands at all times.