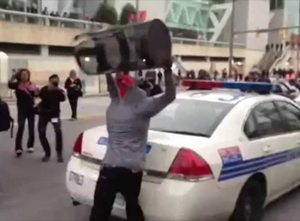 For days, the city of Baltimore has been gripped with protests and riots, in reaction to the controversial death of Freddie Gray while he was in police custody. Stores have been looted, cars have been burned, injuries have been inflicted on both sides, and it’s unclear when the violence will end. In fact, the situation appears to be escalating as Governor Larry Hogan recently declared a state of emergency, and has called up the National Guard.

But amidst this turmoil, a rather strange story has emerged. Apparently, the rival street gangs known as the “Crips” and the “Bloods” have agreed to a truce in solidarity with the protests.

In a move reminiscent of the Los Angeles gang truce during the Rodney King protests, Baltimore area Bloods and Crips have agreed to put aside their rivalry and focus on fighting rogue police officers.

Last Saturday, both Bloods and Crips marched side by side in the Baltimore rallies against police brutality. Putting aside differences, both groups united in one voice to demand “Justice for Freddie Grey.”

Reports among members indicate that members of the Nation of Islam organization brokered the truce, much the same as happened in Los Angeles two decades ago.

“I can say with honesty those brothers demonstrated they can be united for a common good,” Carlos Muhammad, a minister at Nation of Islam’s Mosque No. 6 said.

By all accounts, their desire to “fight rogue police officers” is not supposed to be interpreted as a physical threat. Even the mayor of Baltimore has publicly applauded this apparently amicable development between the gangs. However, the police have a very different opinion this event. They issued a statement earlier today that read:

The Baltimore Police Department/Criminal Intelligence Unit has received credible information that members of various gangs including the Black Guerilla Family, Bloods, and Crips, have entered into a partnership to “take out” law enforcement officers.

This is a credible threat. Law enforcement agencies should take appropriate precautions to ensure the safety of their officers. Notifications will be sent via NLETS. Further information will be sent through appropriate channels.

So what’s going on here? Did these gangs enter a genuinely peaceful truce, or are they planning to go toe to toe with the Baltimore PD? Since none of us know the origins of this “intelligence” it’s hard say.

But if Baltimore PD is right, then they should be deeply worried for the future, no matter how this riot ends. If you follow the alternative media, at some point you’ve probably heard of the 200 police officers in Chicago’s Gang Enforcement Unit, and the astounding 100,000 gang members they are responsible for. It’s a situation that isn’t uncommon in America’s largest cities. Baltimore is probably no exception, especially when you consider the fact that it is one of the most violent and dangerous cities in America.

The reason why I bring this up, is because you have to ask yourself how these police officers keep our cities from falling to the gangs, when they are so completely outnumbered? The most likely reason, is that these gangs are too busy fighting each other to ever pose a serious threat to the authorities. But if they ever stop fighting each other, even in moderate numbers, the police are going to have their hands full in a very big way, and our cities may never look the same way again.

So is this just a friendly (and probably temporary) truce, or are these gangs planning to work together against the police for the foreseeable future? And if this police report is incorrect, is it a case of poor intelligence, or could it be a ploy designed to give the police an excuse for further crackdowns on protestors and rioters.

Via:  The Daily Sheeple