The Ebola crisis is fast approaching a point of no return and now Western nations have gotten involved on a large scale in an effort to prevent the virus from making its way to major cities outside of Africa. Currently, no infections have been detected anywhere outside of Africa but virologists and other researchers have recently warned that the virus is beginning to spread at an accelerated rate and may lead to as many as 1.4 million infections by January. With a mortality rate over 50% and no signs of progress in slowing it down, Ebola could leave more than 500,000 people dead in just a matter of months.

According to some research models, however, that’s not even the tip of the iceberg. Should the virus make its way outside of Africa and spread at a similar rate then it is possible that it would eventually make its way to all corners of the globe. This potential for an Ebola-based global pandemic has set into motion a number of different responses from officials at the World Health Organization, African governments, and western nations.

Many now believe that it is only a matter of time before cases of Ebola are detected in other parts of the world. And if what’s happening in Africa is any guide, then we can expect a widespread, heavily militarized response by officials in the West, especially in the United States. In Sierra Leone the military is doing house-to-house searches looking for anyone who may be infected with Ebola or showing similar symptoms. A similar plan is being put into place in Liberia, where the World Health Organization is rapidly establishing “Community Care Centers,” where those infected with the disease will be detained and quarantined:

The Liberian government, the World Health Organization and their nonprofit partners here are launching an ambitious but controversial program to move infected people out of their homes and into ad hoc centers that will provide rudimentary care, officials said Monday.

The effort, which is expected to begin in the next few weeks, is an intermediate step, officials said. The goal is to reduce the chances that Ebola patients will infect their own families and others while ensuring that they receive basic care — such as food, water and pain medicine — at a time when many hospitals and treatment centers are closed.

The initiative also is a tacit acknowledgment that it could be weeks, even months, before new treatment facilities promised by the United States and others are operational. 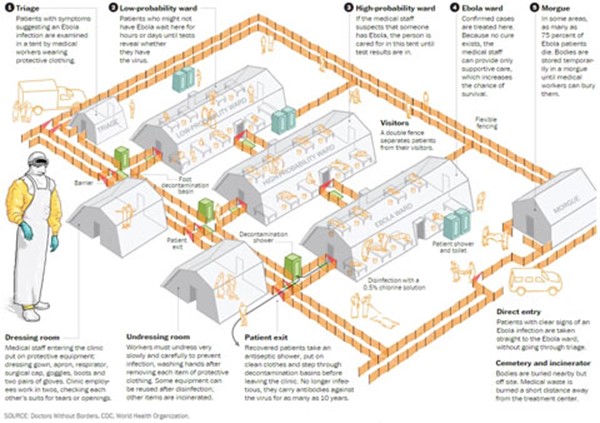 Martial law, round ups of those suspected of being sick, and detentions in quarantine camps is the only option governments have left and similar strategies will be implemented in the United States if and when the virus starts popping up.

But Doctors without Borders, the organization that spearheaded the treatment and containment efforts at the beginning of the crisis when governments were completely ignoring it, says that WHO’s efforts are destined to fail:

One of the main organizations involved in fighting the outbreak, Doctors without Borders, is dubious about the new effort and has decided not to take part. Brice de le Vigne, the group’s director of operations, warned that the proposed community care centers could worsen the situation.

“This is not going to work,” he said. “To move people in an epidemic is a big responsibility, and it requires huge logistical capabilities” that the affected countries simply don’t have.

To be effective, he said, these care centers need to have strict infection control, adequate supplies, trained staff, regular supervision, the ability to diagnose and refer patients, and proper burial methods. Otherwise, they could turn into “contamination centers,” he said.

Similar efforts are already underway in the United States. Earlier this year Ebola bio detection kits were deployed to National Guard units in all 50 states and hospitals around the country have been given guidelines for preparing quarantine units in advance of the virus afflicting Americans.

In July, the President amended an Executive Order giving the medical emergency responders the legal powers to identify and detain individuals suspected of carrying a communicable disease. And though it’s not talked about publicly, it is widely believed the the Department of Homeland Security and the Federal Emergency Management Agency have already pre-positioned domestic detention camps and CDC quarantine centers in the event of a national security emergency.

Ebola appearing in the United States would likely call for exactly such a declaration from the President. In such a scenario it is highly likely that military personnel will be deployed to maintain peace, as well as to work simultaneously with medical professionals to identify and detain those suspected of being infected.

Efforts to develop an effective vaccine are still in progress, thus we must assume that the only plan to contain and prevent the spread of the virus currently available to the government is to mobilize military resources just as has been done in Africa.

And, as we’ve seen in Africa, the virus continues to spread, proving that containment efforts are too little, too late.

The only option for Americans concerned about the virus showing up here is to take preventative measures now, including stocking up on the supplies that will disappear the minute an Ebola infection in the United States is announced. As we’ve noted previously, this should include similar equipment to what you see doctors wearing in Ebola treatment centers:

But just as important is understanding what such an emergency will do to our systems of commerce. If and when people panic, we could well see a breakdown (even if temporarily) of the regular flow of goods to grocery stores, or even people going to work to maintain things like utility plants or other essential services. Assuming we are faced with such a scenario it would be in our best interest to be prepared to deal with the fall-out by having reserve food, water, and other essential supplies on hand to weather the storm.

We don’t know if Ebola will hit U.S. shores or exactly what kind of response to expect. What we do know is that it will likely cause panic, a government mobilization of military resources, and shortages of the most basic essentials we’ll need in a crisis.