How to Make Your Own Vinegar

Making your own homemade vinegar is a great way to save money and become more self-sufficient. With a simple process, you can create your own vinegar to add to your family’s food storage.

The majority of vinegars made by homesteaders are apple cider vinegars or some type of variation. The process is pretty simple and the materials are pretty easy to come by. Below, we’ve listed some directions on how you can make your own.

Helpful Hints
Be Clean. Creating vinegar is a process of fermentation. However, you want the right bacteria to be growing in the jar of vinegar. If you aren’t washing your hands and allow foreign bacteria from your hands or the countertop you’re working on to get inside the container, the vinegar probably won’t turn out right.

Don’t Use Metal Containers. We recommend using a mason jar to hold your vinegar. Placing vinegar inside metal containers will react badly and create a metallic taste or even poison.

Sweet Sugar. Your alcohol that you’re creating will be a lot stronger if you don’t hold back on the sugar in the first step. The stronger the alcohol, the better the vinegar will keep on the shelf. 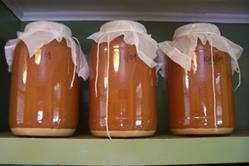 You’ll first want to place the fruit scraps in the large jar or container. In a separate container, add 1/4 cup sugar to every 1 quart of water. Stir well or until dissolved. Add the sugar water to the scraps until the fruit is covered in liquid.

Cover the container with a cheesecloth or sackcloth and tie the top down with a cord. This will allow the contents to breath but still keep out fruit flies or bees. Place the container in an area that maintains a 65-80 degrees F temperature. Check the containers daily and allow the concoction to sit for about a week. If the liquid begins to bubble, don’t worry; just allow it to finish its bubbling process.

Once the liquid is no longer bubbling and has darkened, it’s ready for the next process. Remove the cheesecloth or sackcloth and strain the contents to remove large chunks of the fruit. Once you’ve strained the contents, filter them through the cheesecloth in order to remove smaller particles. Once you’ve strained and filtered the contents, place the liquid in a wide-topped container. You’ll want the mixture to react with a lot of oxygen and need a large opening to do so. After you’re done, place a cheesecloth cover on top of the jar and store in a faintly lighted area.

Storing the contents in a well-light area will prevent the alcohol turning to vinegar. This is also the time when you have to hope that the right bacteria are in the mixture.

The bacterium that reacts to make vinegar is prominent in our atmosphere but many times, in hot and humid areas, there are lots of other bacteria in the atmosphere which will ruin the concoction. You’ll want to keep an eye on the mixture and see if it changes. Maintain the temperature of the room as much as possible. This process can take anywhere from a few weeks to 6 months.

Keep watching the mixture to see if a film begins to form on the surface. This brown-grey film is what is referred to as the Mother. If you see that film begin to form, you know that it’s working correctly. If you see the film, leave it alone and let the Mother do its work. When the mother sinks to the bottom, you’ll know it’s finished.

You can use the Mother in your next batch and add it to the mixture at the beginning of step 2 to get a jumpstart on your bacterial growth.

Storing Your Vinegar
Once the Mother has sunk to the bottom, strain the mixture through the cheesecloth until it reaches the desired strength that you’d like. Store the vinegar in a glass container and remember not to use a metal lid.

Lots of Options
The process of making vinegar has been around for thousands of years – thus, there are a lot of different ways to make it! We’ve also heard of people making honey vinegar, berry vinegars and using apple cider to create apple cider vinegar.