American officials are confirming that Iranian Military commanders have endorsed a plan to attack the United States with a strategic EMP blast that could cripple the country’s power grid for months, possibly years.

The news was leaked earlier this week when Dr. Peter Vincent Pry, Executive Director of the Task Force on National and Homeland Security and Director of the U.S. Nuclear Strategy Forum, wrote a column for an Israeli news organization. He warned that American defense experts made the discovery when translating an Iranian military handbook.

The news is even more troubling, since the Obama administration is in the middle of nuclear negotiations with Iran that could allow the Iranians to keep 19,000 installed centrifuges – equipment that can be used to enrich uranium for nuclear bombs.

The Washington Examiner reports that the Iranian document discusses an EMP attack over 20 different times. With a relatively small amount of nuclear materiel the Iranians could be capable of launching an attack that would cause a nationwide blackout.

Arizona Republican Rep. Trent Franks, who recently introduced a bill to protect the grid from EMP attacks, is also warning of the threat from Iran. He wrote on his website:

“The threat of an electromagnetic pulse weapon represents the single greatest asymmetric capability that could fall into the hands of America’s enemies. Should a nuclear weapon from a rogue state such as Iran be detonated in Earth’s atmosphere at a sufficient height above the continental United States, the blast of electromagnetic energy could immediately cripple America’s electric power grid. Currently, the vast majority of the United States’ infrastructure is unsecured and exposed.”

“According to some experts, just one properly placed EMP blast could disable so large a swath of American technology that between 70-90% of the United States’ population could become unsustainable.”

As the Obama administration continues to make excuse after excuse to defend the Iranians, the government of Iran seems to be preparing to go to war with the West. In fact, last month Iran’s Military Chief said, “we are ready for a decisive battle against the U.S.”

Late last month, Iranian military officials conducted military drills, named Great Prophet 9, where their military attacked and destroyed a replica of a US aircraft carrier. Iranian TV aired pictures of the mock U.S. aircraft carrier as the ship was attacked during the Revolutionary Guard naval exercises near the Strait of Hormuz. 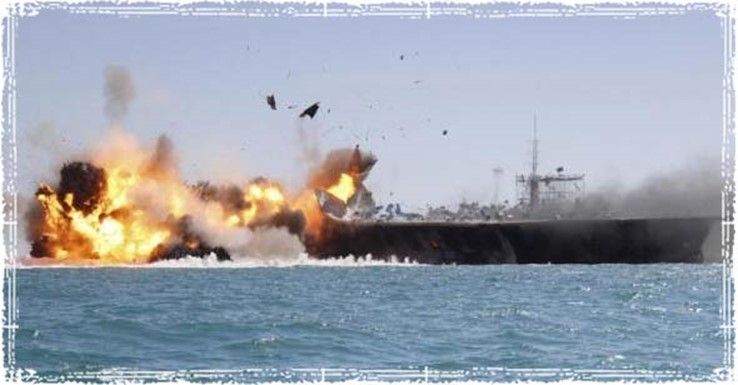 If the United States were hit by an electromagnetic pulse (EMP) the damage would be catastrophic. In a matter of minutes, everything our country depends on would come to a screeching halt.

From ATM’s and banking systems, to key infrastructure like power, water and gas utilities, you would immediately see failures across the board. Our way of life would change in the blink of an eye, and it would take years to even begin to repair the damage.

One nuclear warhead detonated at high-altitude over the United States would blackout the national electric grid and other life sustaining critical infrastructures for months or years by means of an electromagnetic pulse (EMP). A nationwide blackout lasting one year, according to the Congressional EMP Commission, could cause chaos and starvation that leaves 90 percent of Americans dead.

Thus, Iran with a small number of nuclear missiles can by EMP attack threaten the existence of modernity and be the death knell for Western principles of international law, humanism and freedom. For the first time in history, a failed state like Iran could destroy the most successful societies on Earth and convert an evolving benign world order into world chaos.