If life were easy all you’d have to do is read the azimuth on the map and apply it to your compass and voila!  You’d be all set.  Alas, life is never that easy.

For example, where I live here in Maine it’s a west declination of 17 degrees.  That means if I measure an azimuth on my map using the protractor I need to convert it to a magnetic azimuth before I use it on my compass or else I’ll be off 17 degrees as I navigate.  That’s a pretty big error and the more distance I cover the more significant the error becomes. 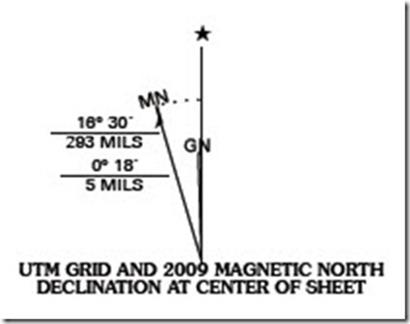 Now let’s set up an example using this 16 degree west declination.  I pull out my map and see that I’m on a mountain top.  I want to walk to the next mountain top, which I measure out at an azimuth of 99 degrees using my protractor.  Now the trick is converting it to a magnetic azimuth I can use on the compass.

There are various techniques I can use, but I’m going to use a visual aid that will help you better understand how it works.  In the chart below I’ve drawn a graphic that shows my GN (grid north) straight up and MN (magnetic north) to the west or left of GN.  I know what my grid azimuth is and what I need to know is the magnetic azimuth.

To find it I first draw an arbitrary line at 90 degrees.  This could be any angle so don’t get hung up on the 90.  In this case it’s 99 degrees that I measured off the map using the protractor.  I draw a solid line from GN to the arbitrary line because this is a known measurement.  Next I draw a dotted (or red) line from the MN to the arbitrary angle and put a question mark on it (algebra folks can put an x here)  because I need to know what the magnetic azimuth is going to be. 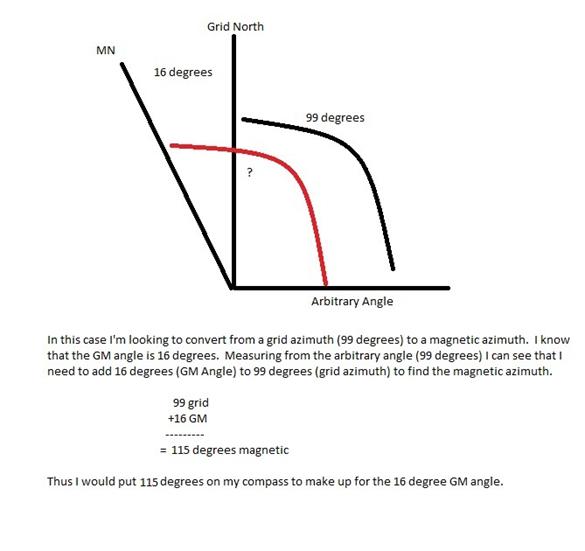 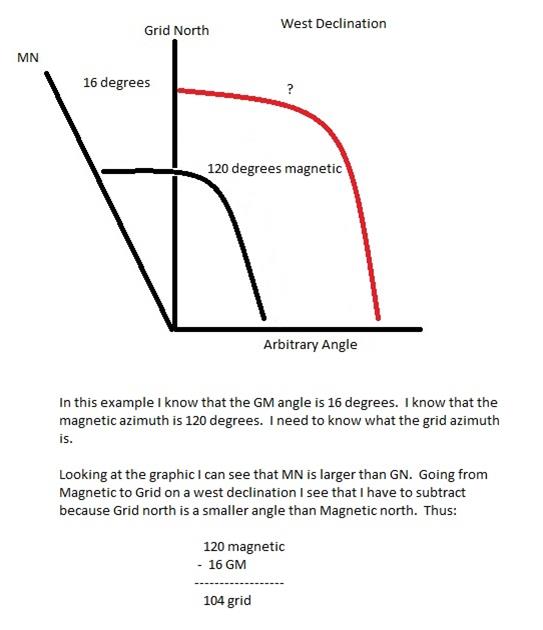 Now lets say we want to shoot an azimuth using our compass and then plot it on the map.  I’m standing on a mountain top and I see a tower in the distance.  I need to know where that tower is.  I know where I am on the map, but I’m not quite sure where the tower is in relation to me.  I pull out my compass and shoot an azimuth to the tower of 120 degrees magnetic.  Now I have to plot it on the map.

Looking at the graphic above I see that Magnetic North is a bigger angle than Grid north on a West Declination, so in order to get from Magnetic to Grid I have to subtract.

Therefore on the map I would use my protractor to plot an angle of 104 degrees from my current location on the hilltop out until I hit the tower on the map.  At that point I would know precisely where the tower is located.

Now let’s say that we’re using an East Declination of 16 degrees.  We measure an angle off the map of 270 degrees and want to put it on our compass.  What magnetic azimuth do we use?

Keep in mind that on an East Declination the magnetic azimuth is always less than Grid Azimuth.  Refer to the graphic below. 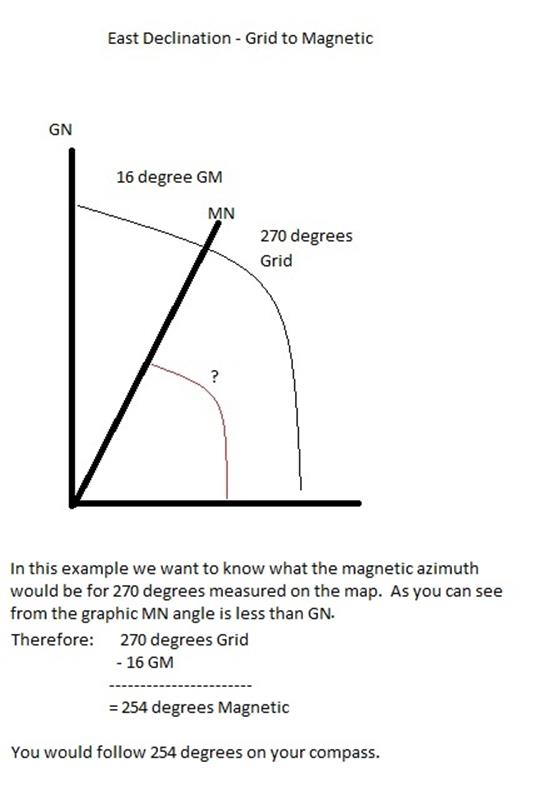 In our last example we are going to plot an azimuth measured from our compass onto our map.  Let’s say we’re on a hill and see an intersection in the distance.  We want to plot a straight line to that intersection.  You measure an angle of 315 degrees from your location to the intersection and want to plot that on the map.

What is the azimuth you’re going to plot using your protractor on the map?

Don’t forget that the magnetic angle is always less on an Easterly Declination. 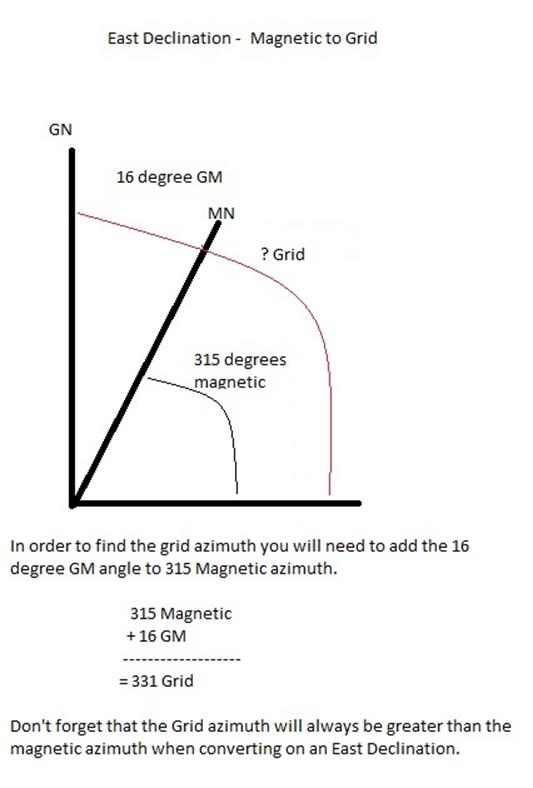 I’m going to create a couple of videos showing how to do this using examples from a real map.  That way you can see how it all comes together.