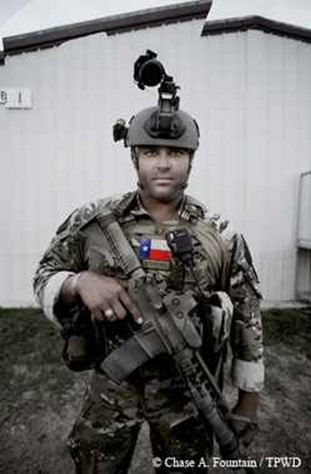 You best not be a terrorist or homegrown radical extremist hiding out in the boonies of the Texas wilderness, because if you are you may well come face-to-face with the Parks and Wildlife Department’s newest rapid deployment “Scout Team.”

The unit is made up of 25 highly trained game wardens capable of deploying anywhere in the state of Texas within four hours. Armed with AR-15′s, BDU’s, and kevlar helmets, the team’s mission according to the TPWD website involves border operations, dignitary protection or any form of high-risk law enforcement, such as serving felony arrest warrants or hostage situations.

As The Dallas Observer’s Brantley Hargrove notes, “the militarization of every possible law enforcement entity in America is complete.”

[The team] is modeled after what military types call a “force multiplier,” which basically means that these guys can shoot a bunch of bullets.

“We’re steeped in tradition and very mindful of our past,” said special ops chief Grahame Jones. “It’s an important part of who we are, but we have to look to the future.”

And the future is a camo AR. Now, if Texas truly intends to secede, it’s got its own military force ready and waiting. We’ve even got a Navy! TPWD has 564 vessels, including a 65-foot gulf patrol ship, and gunboats mounted with .30 cal machine guns.

Maybe we’re a little paranoid here, but doesn’t it strike you as a bit odd that every possible government related entity in this country – be it federal, state or local – is being heavily armed with assault rifles, weaponized drones and battle wagons?

The Social Security Administration, the IRS, the Federal Reserve, property code enforcement teams, and now Parks and Wildlife are all putting Department of Homeland Security’s multi-billion dollar budget to good use.

What, exactly, are these organizations planning for?

Do they know something big is about to go down?

Or is the intention here to strike fear into the populace by instilling in us that America is now a battlefield and the government is ready to go to war with anyone that stands in its way?