Power Plant Attack: “Most Significant Incident of Domestic Terrorism Involving the Grid That Has Ever Occurred”

Chances are you didn’t hear about it when it happened or the investigation that followed. Last April just outside of San Jose, California the grid system came under direct attack.

Investigators have yet to identify any suspects, but the attack seems to have been well planned. First, someone accessed an underground vault housing fiber optic telephone cables and cut off communications to a large PG&E Substation.

Then, for 19 minutes, someone opened fire from long-range.

The sniper apparently utilized 7.62x39mm rounds, such as those used in an AK-47, to target the oil-driven cooling systems for 17 large transformers. The shell casings found at the scene had been wiped clean of fingerprints. According to Newsmax none of the transformers exploded, but the damage was significant enough for PG&E to force their electricity feeds to reroute through another station in an effort to prevent a widespread blackout.

As of yet police and the Federal Bureau of Investigation have no leads. The evidence suggests any number of scenarios with the highest likelihood being a coordinated attack involving a team. But because of its simplicity it’s possible that the attack could have been orchestrated by a lone individual.

Whatever the case, the event prompted the head of the Federal Energy Regulatory Commission Jon Wellinghoff to call it, “the most significant incident of domestic terrorism involving the grid that has ever occurred.”

The 64-year-old Nevadan, who was appointed to FERC in 2006 by President George W. Bush and stepped down in November, said he gave closed-door, high-level briefings to federal agencies, Congress and the White House last year. As months have passed without arrests, he said, he has grown increasingly concerned that an even larger attack could be in the works.

He said he was going public about the incident out of concern that national security is at risk and critical electric-grid sites aren’t adequately protected.

The Federal Bureau of Investigation doesn’t think a terrorist organization caused the Metcalf attack, said a spokesman for the FBI in San Francisco. Investigators are “continuing to sift through the evidence,” he said.

Some people in the utility industry share Mr. Wellinghoff’s concerns, including a former official at PG&E, Metcalf’s owner, who told an industry gathering in November he feared the incident could have been a dress rehearsal for a larger event.

“This wasn’t an incident where Billy-Bob and Joe decided, after a few brewskis, to come in and shoot up a substation,” Mark Johnson, retired vice president of transmission for PG&E, told the utility security conference, according to a video of his presentation. “This was an event that was well thought out, well planned and they targeted certain components.” 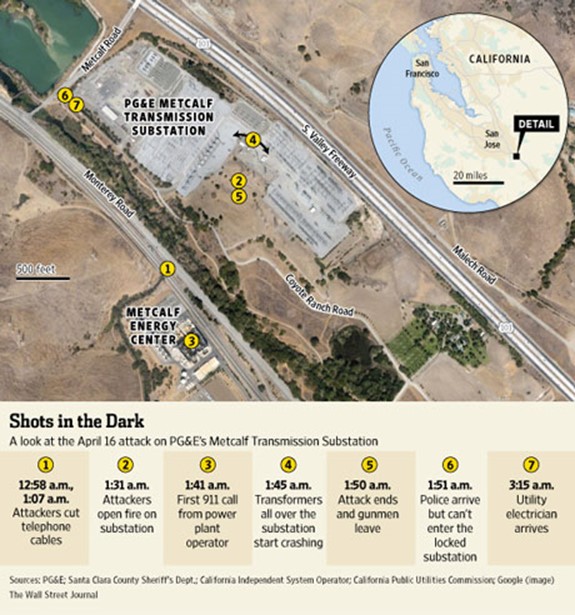 (Via the Wall Street Journal)

The most significant power grid attack in U.S. history failed to be reported in any detail by officials or the mainstream media, likely because they did not want to panic the populace.

Could this have been a test for a larger scale event? Certainly.

Since then, what steps have been taken to protect the grid from such attacks, or even other potential scenarios like electro-magnetic pulse devices or solar flares that could wipe out the national power grid within seconds? None.

A single individual could have carried out such an attack. Cut the phone lines. Take aim. Open fire. It’s simple, really.

Now consider the potential damage if a rogue terrorist group or state-sponsored initiative launched a coordinated attack across 50 to 100 critical nodes all over the United States. Such an attack could bring the country to a complete standstill, leaving economic destruction and large-scale destabilization in its wake. A couple of days are manageable, but if the right equipment were to be targeted then it’s possible that repairs would take up to 18 months because many transformer components are sourced from foreign nations and have long build times.

The telecommunications systems, power grid, water utilities, transportation systems, oil refineries and other critical industries across America are, as reported by U.S. Cyber Command, completely exposed to attack. It could come in the form of a cyber-vulnerability, as we saw in Illinois when a utility station’s water pump systems overheated due to a reported digital security breach or when our drone fleet was hacked in the middle east. Or, it could be a physical attack like the one in California, with future incidents potentially involving larger transformers and explosives instead of AK-47′s.

The possibilities exist. Our government knows this, as evidenced by the comments of outgoing DHS Secretary Janet Napolitano who recently said that a crippling attack against U.S. infrastructure elements is inevitable.

The fact is that our infrastructure is outdated and exposed. It will not be repaired any time soon because the costs run into the hundreds of billions of dollars.

Thus, the only real option for Americans is to expect that such an event is coming, and to prepare for it.

Congressman Roscoe Bartlett, who has retired and now lives well outside of populated areas, says people should get out of major cities and have a retreat to avoid the fall-out from a grid collapse. His fears are substantiated by a recent report that claims 9 out of 10 Americans would die within a year of the electricity going out.

But whether you head out to the boonies or stay local, even the Federal Emergency Management Agency recommends having an emergency supply because, as they’ve admitted, any response in a catastrophic scenario will be slow to come. This means that having a preparedness plan complete with evacuation strategies, food supplies, water and other considerations will be essential to survival.

The threat is real.