Prepare for a large-scale nuclear EMP attack over North-America

An EMP event on the USA would look like this: 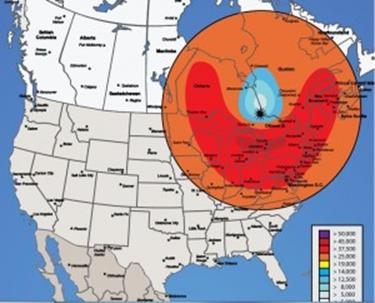 Hello fellow survivalists / preppers, this is Seamus Finn, writing to you from the beautiful, French-speaking province of Québec, Canada.

Some of you might already have considered the risks of a large-scale EMP attack over North-America. To the few of you who have not, this is but a small amount of information that might help you survive an EMP-related TEOTWAWKI. The author does not consider himself to be an expert about this matter, but would like to share his little bit of wisdom about what he sees as the most potential survival scenario to happen in the next few years, months maybe.

First of all, here are some frequently-asked questions about EMP attacks.

1: Would an EMP affect items that are unpowered at the moment of the pulse?

Answer : Yes, it would definitely ruin any unpowered, printed-circuit, technological item that remains unprotected at the very moment of TEOTWAWKI.

2: Would a homemade Faraday cage protect my equipment?

Answer: It depends. Most industrial/military Faraday cages rely on a self-sufficient, internal power-supply that would, too, remain unaffected by an EMP attack because it is self-protected inside the Faraday cage. Most homemade designs I have seen consist of a .50 caliber ammo box or an aluminum/steel trash bin that is linked to a car battery or some other non-reliable apparatus. The idea of making a survival Faraday cage is good, but the cage needs some specifics to be considered :

The size of each hole in the cage must be smaller than the wavelength of the pulse/excess charge.

The power supply of the cage must be DC and placed inside of it, because the 3 waves of particles that follow an EMP attack can last from 2 to several minutes, so it’s very likely that a power-supply located outside the cage would only protect the content for about 5 nanoseconds.

It needs not be grounded. Actually, it is better not be.

Partial Faraday Cages (such as a microwave oven or a car) MAY protect items that are inside.

Since it is impossible to really test a Faraday cage, don’t rely on it too much.

3: How likely is it that a rogue country would detonate a nuclear device above North America?

Answer : Well, if I was a psychopathic, red-button-owning, aggressive dictator, I definitely would. Most countries do NOT have sufficient nuclear power to set ablaze large countries such as the United-States or Canada. The best and most reliable way to ruin these countries, considering they completely depend on electricity, would be to launch a 1MT nuclear warhead in space above North-America (see graph), rather than destroy MAYBE 0.1% of their industrial capacities with above-ground-detonations like in Hiroshima.

So here comes the main topic. I know very few survivalists who would completely refute the risk of such an attack on American soil (or space). Since it is one of the most credible man-caused TEOTWAWKI scenarios, I strongly suggest that every survivalist consider it when prepping. In this matter, this text will focus on how to adapt to the possibility of an EMP attack and the best ways to survive it if it were to happen.

The very first thing to do when prepping for such an event is to acquire skills and knowledge about the way an EMP attack would affect a post-industrialized country such as the United-States. Know that electric centrals would stop generating power. Most cars would completely stop working (forget about your nice automatic transmission sedan or pickup truck, pals), television, radio and Internet news networks as well as government emergency signals would be off, there would be no more running water and oil/gas facilities would stop working. Since urban citizens do not produce their own food, the cities would be full of hunger-driven rioters and raiders. It would be a nightmare to live in a city after the first 48 hours. Considering this, a good prepper needs to plan his bugging out routine according to the situation. Rural citizens, on the other hand, would be mostly unaffected by riots and chaos, unless there is a large city less than a hundred miles around.

A good prepper needs to learn skills and knowledge about how to work things out when completely off the grid. Basic skills such as gardening, power-generation, raising livestock and building structures are essential, but gathering and preserving food, as well as treating water on a long-term basis must not be neglected.

So now, how can someone survive such a crisis? Let’s focus on getting out of the city for a minute. Remember, your car doesn’t work. Actually, less than 1% of the cars would keep working after an EMP. Only some pre-90′s cars would not be affected by an EMP attack. And let’s say the pulse happened during the 4pm rush-hour. ALL roads are blocked by idle, useless vehicles. So unless you go by foot or on a bicycle, you better bug-in. Plan on having a good-ol’ pickup truck and pray that the blast would occur at night. Still, let’s say you don’t have a running vehicle. You must go by foot. How far is your bug-out location? 50 miles? A hundred miles? You better have cached supplies on the way, or you might just die of dehydration while bugging out. Is your flashlight affected by an EMP? If so, forget about nighttime traveling, you’ll be walking with the sun, pal. Buy yourself an oil lantern or risk having a shortage of light, especially during short days in winter.

Okay, you’re at your BOL, what now? Did you buy/build a manual water pump inside your shelter? If not, you’ll need to walk all the way to the nearest stream and then back to your shelter with several gallons of water, which is very energy and time-consuming. Did you plan on having a radio working? If not, better start building a Faraday cage right now. No guarantee it will work, but it’s sure as hell better than NOT having one. Don’t forget to install your power supply inside the cage, or you’ll have a very bad surprise when the grid goes down. Sun goes down again; do you own candles, lanterns and other “antiques”? Did you spend most of your prepping budget on high-tech gear? A 200$ red-dot rifle sight is good, but you could also buy a basic scope instead. Or about a month of food supplies for the same price.

All these questions, a rural prepper must also ask himself. To rely on electricity is to trust international corporations and a corrupted government when it comes to basic needs such as eating, drinking and heating your home. A hobo stove is good, but a cast-iron wood stove is better, and you can use the chimney conducts to heat ALL of your home with these hot pipes. And you know the best? It’s less expensive than your brand new, flat-screen TV! WOW!

On a serious note now: remember Katrina. If a regional-scale event caused such a chaos on a mid-sized city, imagine what it would do if the whole east-coast was to be in the dark for a year. Most people would DIE or evacuate. Some would die trying to stand their ground, others would bug-out and maybe make it. But what if help never comes? What if you spend a whole year waiting for federal troops to restore order, while you had NO WAY of knowing that they have been sent away in another country for a large-scale war?

If you think you are ready for an EMP attack, you are wrong. You can only be less unprepared. Be wise, be self-sufficient, be geared, and pray that it never happens.

Colors on the image:

It’s a color scale, ranging from white (no effect) to purple (maximum effect), depicting the effects of an atmospheric EMP burst. I’ve somehow managed to lose the unit scale while editing the picture, but I can describe the effect by memory.

The light-blue to pale-blue area would be rather unaffected by the burst, it’s the “ground zero”, or as I like to say, “sky-zero”, comparable to the eye of an hurricane.

The orange circle is the radius of a 25 000 “forgot-the-unit-name” effect, which is, basically, total disruption of electric power.

The red “U” and the smaller, dark-red band, below the blue “sky-zero”, whould be the area most affected. As you can (or cannot) see, it reaches from Thunder Bay (Canada), to Hâvre-Saint-Pierre (Canada), encompassing the major cities of : Montréal, Ottawa, Albany, Boston, Providence, New-York, Philadelphia, Washington DC, Charleston, Toronto, Chicago and Detroit.

The orange circle reaches as far as Winnipeg, Des Moines, Raleigh, Halifax and Kuujjuak. Impressive range for a single burst, isn’t it?

As most of you, Americans, know, most nuclear plants on the eastern seaboard are located within the orange-red area, which is another hazard caused by an EMP.

Keep in mind that this is written from a “Canada” view point/event.

Check out this scary government report:

An EMP event on the USA would look more like this: