Self-defense in a “flash mob”‏ / Riot? 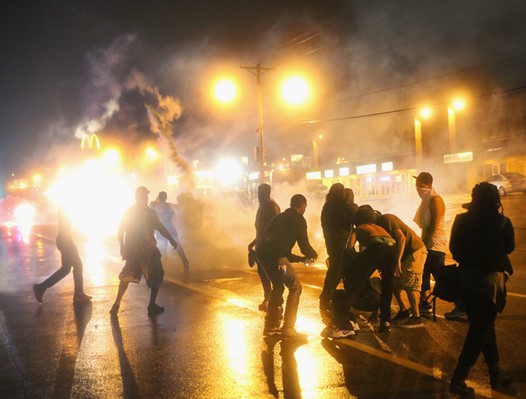 Here’s a recent question:
Do you have any thoughts about how a CPL/CCW/CHL holder should react in a flash mob situation that turns potentially violent? I know that the best scenario would be to leave when the mob begins, but say you’re trapped in a store when they start trashing the place, and they see you and decide you’re to blame for their economic troubles and start to come at you. In such a situation, your life is in definite danger, but you can’t just start shooting indiscriminately. Any advice? With the Ferguson ruling expected any day now, things might get interesting in a hurry.

Here’s the response:
It’s an interesting topic. Right now we’re waiting to see what happens in Ferguson but this can truly happen anywhere. Between riots, looting and flash mobs, its important to know how to react, what to do and what NOT to do.

First, get proper training. Even before buying a gun, learn how to use it properly. Shooting cans with your cousin or uncle does not constitute professional defensive shooting training. If you haven’t been properly trained, no matter how well you think you shoot you still haven’t don’t know how to FIGHT with the gun, and that’s very different from target practice and hunting.
Second, its important to actually carry your weapon at all times whenever possible. I have said so many times but its worth repeating. The gun left in the safe will do you no good, it’s the one on your hip that matters when the chips are down.
When it comes to dealing with a mob, the first thing to keep in mind is that drawing a gun is the last thing you want to do. Stay calm, its probably not about you and if its not about you don’t change that by bringing your gun to the equation. Leave it in your holster for now. Whenever possible, leaving, even running is better than shooting someone. I’ve been caught in a number of protests, roadblocks and lootings. In most cases you are better served by remaining calm and moving away from the group. That alone works beautifully well. When it comes to getting trapped, try to avoid that as much as possible. Whenever walking into any room, always identify at least two exit points. The one you just walked through would be one, but find another one. Fire or riot, you still need to know how to escape.

If the violence is directed against you and you can’t escape, we’re talking about a pretty bad series of events where many mistakes were already made. In this case, with your safety at risk and a reasonable fear for your life, you can bring out your gun. This doesn’t mean you start shooting, but it may still help, as guns often do. No one wants to get shot, and with your gun drawn you may have bought a few seconds given the surprise/fear factor guns usually have. Make the most of those seconds, move away fast. If you wait too long those nearby may lose that fear, become more bold and try grabbing you forcing you to escalate. Of course you want to avoid this as much as possible. If that’s the only option left and its either shoot or get killed, shoot the closest, most violent attacker first, quickly move to the second one and assess the situation before engaging again. One guy dropping after getting shot usually causes those around him to reconsider their actions. How cool and in control you remain will decide if they rush you or not, so you better know what you are doing and do your best to stay in control.

Maybe the most important thing to keep in mind regarding such a delicate situation is training. Proper training will be crucial so as to control the situation, have enough confidence, project that confidence towards the mob, and ultimately have self-control so as to know when to shoot and when not to. Untrained, nervous people are far more likely to mess up, maybe even accidentally shoot, effectively escalating the situation.
Get training, carry your weapon and stay calm!