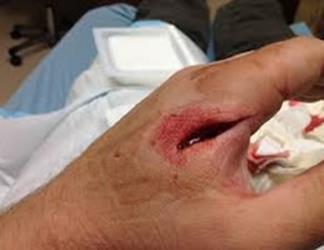 Given the media outcry against gun ownership, it’s easy to forget the wounds that are caused by knives and other sharp instruments.  Trauma incurred from these injuries may be minor or major; penetrating trauma such as caused by a stab wound should not be discounted as a major injury; it can be life-threatening, depending on the organs and blood vessels damaged

Penetrating trauma is divided into perforating and non-perforating.  A perforating wound is one in which the object causing the damage goes into one side of the body and then exits through the other side.  A wound from .223 or NATO .556 would, commonly, be an example of this type of penetrating trauma.

One of my first classes in medical school showed a slide of Major General Henry Barnum, who received a minie ball through the hip in the battle of Antietam.  Years later, he could still pass a thin rod from the entry wound all the way out the other side.  General Barnum’s hip, incidentally, is still on display in the National Museum of Medicine, where it has been for over 100 years.

Bullets and other high-speed projectiles cause damage related to the shock wave produced as the bullet passes through the body. This is called cavitation.  Many bullets will fragment in the body as well, sometimes causing damage further from the entry wound than expected.  Luckily, low speed projectiles such as knives will not do this. Your concerns are related specifically to the area of entry and the structures located directly in the path of the offending instrument.

Stab wounds are an example of a non-perforating wound:  the projectile causing the damage enters the body and either stays there or exits where it entered.  Most knife wounds would fit in this category, as the knife doesn’t pass entirely through and out of the body.  Some sharp instruments might do this, say a crossbow bolt or a spearhead, but let’s assume that you’ll be unlikely to see these. Most knife wounds you’ll see will be minor lacerations.  Blood loss and failure of damaged organs will be the major issue to deal with.

A little about blood: Blood carries oxygen to the tissues and organs and removes waste products. It is made up of several components, including:

Your immediate action upon encountering a victim of a wound with a sharp instrument may save their life.  Bleeding from arteries and internal organs can be very brisk.  If you are a typical 180 lb. (about 70 kg.) adult, you have approximately 9-10 pints (about 5 liters) of blood in your body. Athletes and those living at very high altitudes may have more. You can’t afford to lose more than 40% of total blood volume without needing major resuscitative efforts.  To get an idea of how much blood this is, empty a 2 liter bottle of fruit punch or cranberry juice on the floor.  You’ll be surprised at how much fluid that represents.

Hemorrhage (bleeding) is classified by the American College of Surgeons (of which I am a Fellow) as follows:

Class I:  Hemorrhage is less or equal to 15% of blood volume (1.5 pints/3/4 liter) in an average adult male.  A person donating 1 pint of blood is giving slightly less than 0.5 liters, for example. At this level there are almost no signs or symptoms, although some may feel vaguely faint.

Class II:  Hemorrhage is 15 to 30% loss of total blood volume (2-3 pints/1-1.5 liters).  The body tries to compensate at this point with, among other things, a faster heartbeat to speed oxygen to tissues.  This patient will appear pale and skin will be cool.  They will feel weak.

Class III: Hemorrhage is 30 to 40% loss of total blood volume (3-4 pints/1.5-2 liters).  At this point, the heart will be beating very quickly and is straining to get enough oxygen to tissues and blood pressure is low. Smaller blood vessels in extremities are constricting to keep the body core circulation going. This patient will be confused, pale, and in hypovolemic (low blood volume) shock. Blood transfusion is usually necessary.

Class IV:  Hemorrhage is more than 40% of total blood volume (greater than 4 pints/2 liters). The heart can no longer maintain blood pressure and circulation.  Without major resuscitative help at this point, organs will fail and the patient will likely be comatose and die.

In most circumstances, sharp instrument injuries will be minor.  After controlling bleeding, your goal is to clean the wound thoroughly and dress it.  Wound closure may be an option in some wilderness cases, but most backcountry stab wounds will be dirty and should be left open (subject of another article).

If you’re attending to an actively bleeding wound from a sharp object, you will need a level head and quick action.  This is, sometimes, not as easy as it sounds; most people not accustomed to dealing with these issues on a daily basis will experience a type of paralysis that may waste precious time. If modern medical care is available, contact emergency services immediately.

All of the above may not be necessary if you practice preventative measures.  In other words, don’t run with scissors.  With some foresight, you may be able to avoid a mishap that could turn into a tragedy.