How To Make Yeast For Long-Term Storage

Bread, beer, and wine are all foods that have been part of history for eons, but they all require yeast to make.

What if SHTF? Packaged yeasts are great, but they have a shelf-life and in order to make your own bread daily, you’d have to stockpile way too much to get you through. Isn’t it better to know how to make your own?

Read on, and you’ll have the yeast to make bread, alcoholic beverages and other goodies no matter what happens!

First, you need to know what yeast is. Essentially, it’s a leavening agent that made with “good” fungus during a separation and fermentation process. Yeast spores live on most plants so vegetables, fruits and grains can be used to obtain yeast for a variety of uses. Different yeasts are used for bread and alcoholic beverages – baker’s yeast and brewer’s yeast – and they’re not interchangeable.

Brewer’s yeast is and inactive (dead) yeast used to encourage the fermentation of fruits or vegetables into alcoholic beverages. Baker’s yeast is an active (live) yeast used for leavening. It’s what makes bread rise and gives it that fluffy lightness.

Salt and sugar are both necessary to make yeast but too much of either is a bad thing. The salt acts as a preservative. The sugar is actually the food that feeds the yeast. Once it’s consumed, the byproducts are carbon dioxide and alcohol in different proportions depending upon the strain of the yeast.

There are a few different ways that you can make baker’s yeast. If you have a pack of dry yeast, you can use it to make a starter that you can keep going. To me, that seems to defeat the purpose of learning to making yeast from scratch, so we’ll concentrate on other methods.

I’ll include a recipe for using yeast, just so you have it if you want it, but let’s concentrate on doing it without the crutch! Finally, you may want to check out this article about making bread once you’ve got your yeast made.

How to Make Yeast from Potato Water

This is probably the easiest kind of yeast to make, because potatoes are always around. The yeast is great for making a nice loaf of bread, hot rolls, or even cinnamon rolls. Plus, it’s easy to keep as a starter so you don’t have to start from scratch every time you want to make bread. There are a couple of ways to do this.

All you need is potato water, flour, and sugar.

Cook your potatoes as you usually would, except save 3 cups of the water. Divide the water in half. Stir a tablespoon of sugar and about a cup of flour into a cup and a half of the water, or until the mixture is sort of stiff. Cover and leave overnight in a warm place and it should be bubbly and yeasty-smelling the next morning. If not, you’ll need to start over. This is why you should save some of the water back.

Mix ingredients in a jar and cover loosely, then let it out at room temp for 24 hours. If you close it too tightly, you’re making a yeast bomb. OK, maybe not that bad, but the jar can crack or blow the lid off because of all the carbon dioxide that’s going to be released.

Refrigerate for 3 or 4 days. On the fourth day, stir in 1/2 cup sugar and 3 tbsp. instant potato flakes and a cup of water. Leave it at room temp for another 24 hours and take out a cup of it to make your bread. Feed it with another 1/2 cup sugar, 3 tbsp. potato flakes and a cup of water. You need to remove a cup of starter and feed it once a day if you leave it out or every 4 days if you refrigerate it. It just comes down to how often you want to bake.

This is another take on the first starter but it uses the whole potato instead of flour.

Boil the potato in the water until it’s soft. Mash it well then add the sugar and salt.

Cool til it’s just barely warm, then add to the water.

Cover and put it in a warm place so that it can ferment. If it doesn’t ferment, you can cheat and add a packet of dried yeast. If you don’t want to do that, give it a day or two and if you still don’t get fermentation, you’ll have to start over. This makes enough starter to make a few loaves of bread.

Yeast is present in all grains and this starter was used for centuries by people who couldn’t run to the grocery store and buy a packet of yeast. Fresh ground grain is, of course, the best to use but regular unbleached all-purpose flour will work, too.

Mix the flour and water then pour it into the jar. Cover and let stand in a warm place until it starts to bubble and rise. Depending on the temperature and humidity, this may take anywhere from 1-7 days. Take out a cup of starter for each loaf of bread, then add back in equal amounts of water and flour. You can toss dough scraps back in, too.

Grapes are a great fruit to use to make yeast but you can use just about any fruit or peels to do it as long as it’s unwashed and organic. You can also use organic unpasteurized juice.

Crush the grapes well and put the juice, pulp, and peels in a jar and cover with cheesecloth or a coffee filter. Put it in a warm place and leave it alone for 3 days. It’s kind of fun to check it every day because you’ll see the bubbles start to form. That means that the yeast is growing.

On the 4th or 5th day, strain the mixture and discard the peels and pulp. Don’t put them on your compost pile. Stir 1 cup of whole wheat flour into the juice. Let the starter set for 24 hours. Take out one cup and add another cup of flour and a cup of water. Leave it in a warm place for a couple of days. By this time, you should have a bubbly starter.

Remove up to 2 cups (enough to make 2 loaves of bread) and leave at least 1 cup as a starter. Feed it with another cup of water and cup of flour. Let is sit for at least 24 hours before removing more, and as long as you always leave a cup behind and add the feed, you’ll always have bread starter!

Just a side note: according to my sources, you can use fruit juice to make yeast starters for making alcoholic beverages, too. Yum…wine! Read this article to learn how to make wine.

So you have one more recipe to add to your survival TO DO list, next to pemmican, lard, and other basic survival foods that our ancestors used to cook. 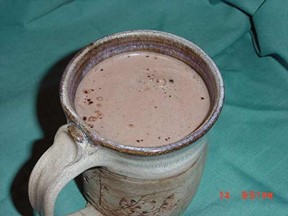 Hot cocoa seems to taste better in an artisan cup.

Hot cocoa is a definite comfort food for many of us. Here’s how to make a cocoa mix from storage food, and tweak the recipe to make it a more healthy drink.

I love it when a scientific study re-enforces something I’d like to believe.

That’s what happened when I came across a Harvard Medical Study that suggests drinking two cups of cocoa per day significantly increases memory in older adults.

According to the study, drinking two cups of hot chocolate a day may keep the brain healthy and prevent memory decline in older people by preserving blood flow in working areas of the brain.

Farzaneh A. Sorond, lead author and member of the American Academy of Neurology, told the press:

“As different areas of the brain need more energy to complete their tasks, they also need greater blood flow. This relationship, called neurovascular coupling, may play an important role in diseases such as Alzheimer’s.” (Click on Harvard study to read the complete article.)

Regardless of the potential health benefits, there’s nothing like hot cocoa after a day of skiing, snowshoeing or working outside in cold weather. Mix these dry ingredients, measure it into one cup mixes, and carry in a sandwich bag. When you’re ready for a hot drink, just add it to hot water.

Here’s a cocoa recipe that makes use of your storage foods.

In a large container, mix all ingredients and cover with a tight fitting lid.

To serve, bring one cup of water to a boil, stir in 1/4 to 1/3 cup of instant cocoa mix, stir and serve hot. For a vanilla flavored cocoa, add 4 tablespoons vanilla powder. From “Jan’s Fabulous Food Storage Recipes: Converting Stored Foods into Useable Meals” by Jan LeBaron.

To make the drink healthier add cinnamon, which reportedly moderates blood pressure and peppermint, which aids in digestion. Chili powder is said to calm arthritis, may ease headaches and helps with insulin control. Start by adding 1/8 to 1/4 teaspoon of each to every cup of cocoa and adjust the seasonings to your personal preferences.