One of the most important rules of preparedness is to always have at least 3 different methods for cooking food and heating water. In an emergency that goes on for more than a day or two, eating cold soup out of the can will get old, and sooner or later, you’ll need to boil water for sanitation purposes, at least.

The HERC Tea Light Candle Oven* is a newcomer to the scene, and it’s a welcome one. 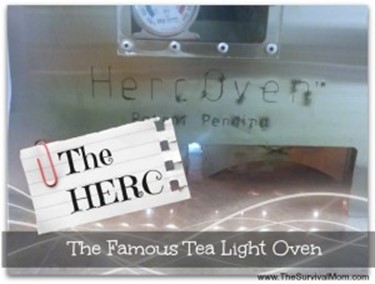 It’s design and use of tea lights as its only source of heat for cooking is drawing a lot of attention on the internet and throughout the prepper community. At first, it doesn’t seem possible that tea lights can bake bread, cookies, and roast a chicken. I have to admit, I was skeptical.

What sets apart the HERC, aside from those tea lights, is the fact that it can be used indoors without emitting harmful fumes or requiring any ventilation with a fuel source that is budget friendly, to say the least.

The HERC Tea Light Oven in my kitchen

The HERC (Home Emergency Radiant Cooking) is made entirely of heavy duty, laser cut brushed stainless steel, and each piece fits together nicely. Two people can put it together in about 30 minutes. Taken apart, the entire oven can be stored in its fabric bag (included) or a hard, molded plastic case that will soon be available as a separate purchase. Either way, the oven is pretty easy to tote if you want to include it with your camping gear or store it in the trunk of your car for barbecues at the local park.

We set the HERC on my kitchen counter, and it’s been there for about 2 months as we’ve used it to bake bread, a roast, several batches of brownies, and a casserole or two. If you’ll be feeding a crowd, with the HERC you have a handy “double oven” for cooking all that extra food, as well as a source of entertainment. It’s quite fascinating to watch the oven thermometer, included with every HERC, as the temperature rises, all thanks to a few tea lights. 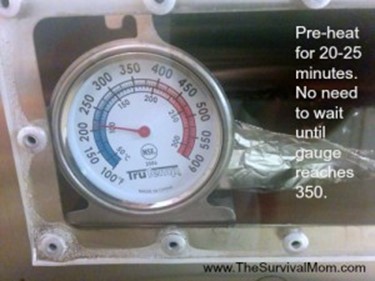 The XXL HERC uses a total of 20 tea lights, 10 on each side, in trays that slide in on either side below the oven. Depending on the brand, the candles can last for 5 or more hours. Over the past weekend, I baked slices of roast and brownies, and the candles were only about half-used. Between about 20 minutes of preheating and an additional 90 minutes of baking time, there’s still enough fuel in those candles for at least 3 more batches of brownies!

Now, for those on the slightly short side, the only difficulty you will run into with the HERC was placing food down into the oven and then taking it out when it was finished. Sitting on a counter top, the oven, at 12″ high may be a little high to easily place food down into it. You may need either a step stool or the help of someone taller to take care of this. When we get around to moving it, I’ll likely place it on either a lower counter or on a table.
Because the entire oven becomes very hot, you’ll need to have a thick set of oven mitts or pot holders, and be sure to keep kids and pets away. Also, since there are 20 open flames involved, it should always be supervised.

So, how does it cook?

Based on my own experiences, the HERC does a great job of baking food. Brownies were evenly baked, the roast was well done and moist, the bread had a lightly crisp crust and soft interior — just the way it should be.

The even baking is due to the unique design which incorporates unglazed stone tiles that absorb and then radiate heat. I’ve used Pampered Chef baking stones for years, and they use the same principle. The HERC utilizes both convection and radiant heat. Nothing I baked burned and if anything was overdone, it was completely due to operator error! 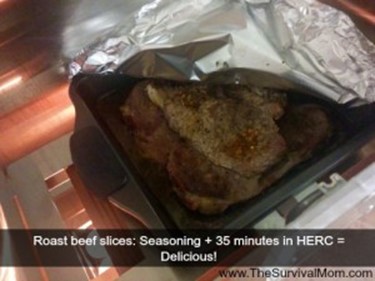 Some of the recipes my family enjoy are a perfect fit for the HERC:

We haven’t yet taken it camping, but I plan on including it on our next outdoor adventure. The one possible drawback to this may be trying to use the HERC outdoors on a windy day. However, with our oven, we received 2 small metal shields that can be placed over the side openings that house the candles. They would provide some shielding from the wind.

When is the HERC most useful?

Kris Johnson, the designer of the HERC and owner of the parent company, Titan Ready Water, originally planned the HERC to assist families with their cooking needs in a power outage. Power outages are a common fact of life in certain parts of the country and all types of weather, from blizzards to hurricanes and tornadoes, can cause them. Once you’ve invested in a HERC oven, you only need a supply of tea lights, so families in distress not only have a way to cook their meals (both indoors and outside) but have a method to do so that is extremely frugal.

One extra smart reader, noted that in an emergency, when everyone else is scrambling to buy propane, butane, gasoline, and other fuels, there could be piles of tea lights just sitting around, waiting for a HERC owner to come along!

As well, the HERC doesn’t depend on sunlight, which is an obvious requirement for a solar cooker. I still love using the sun to cook food, but now that I live in a part of the country that gets more rain and our backyard is nearly covered with shade trees, I need an emergency oven that uses more reliable fuel. Folks in the Pacific Northwest, in particular, should plan on adding a HERC to their emergency supplies.

Although the HERC gets quite hot, it still doesn’t emit as much heat in the kitchen as my gas oven. When we lived in Phoenix, I used to dread baking anything once the summer heat arrived. I would get pretty creative with my meals, making lots of salads or cooking recipes that required stove top cooking only.

Twenty tea lights are plenty hot for bringing up the baking temperature inside the HERC but not so hot as to raise the temperature in your kitchen.

During the days and nights of beautiful weather, a lot of us love cooking and eating outdoors. Take the HERC to the park, a family reunion, or just your back patio to do all your baking right there. The grill-master is the one who gets all the attention, but now you’ll be producing baked beans or hot cornbread on the spot!

Do be sure to protect your tea lights from extreme heat. I have a few hundred of them currently stored in a 5 gallon bucket that I keep in a hall closet.

The smaller size HERC is fueled by just 10 tea lights!

There are likely many, many places around your home or garage where a HERC could be stored. Not so with the tea lights, however. They should be stored in a cool place so the wax doesn’t melt.

Not all tea lights are made the same, nor will they all burn for the same length of time. I suggest buying a supply from 2 or 3 different companies, and use a different batch each time you bake to see which brand lasts longest. If you time your preheat (around 20-25 minutes), you might even find that some candles burn hotter than others.