President Trump ordered a cruise missile strike against Syria early Friday local time in retaliation for the chemical weapons attack that killed 86 people on Tuesday, according to the Pentagon.

The attack, the first conventional assault on another country ordered by Trump, comes a day after he declared that the chemical weapons assault had “crossed many, many lines,” including causing the deaths of 27 children.

Years of previous attempts to change the behavior of Syrian President Bashar Assad have failed, Trump said from his resort in Palm Beach, Fla.

The missiles, fired from a U.S. Navy vessel in the Mediterranean Sea, struck multiple sites, including the airfield where Syria based the warplanes used in the chemical attack, a Defense official said. 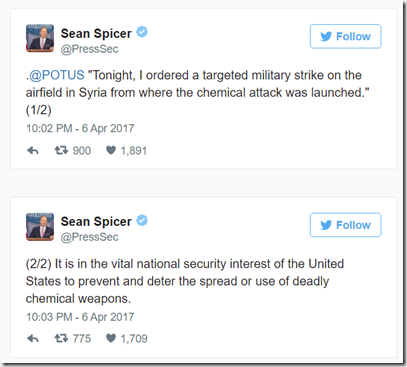 The attack essentially follows the plan that the Pentagon had set in September 2013, according to a senior Defense official not authorized to speak publicly about the operation. That plan was devised after President Barack Obama had set a “red line” on the use of chemical weapons.

Assad had used the weapons that killed 1,400 civilians, but Obama did not order an attack. Instead, Assad agreed to turnover his stockpiles of chemical weapons, a pledge he obviously reneged on in light of Tuesday’s use of what experts believe was sarin gas on civilians.

In 2013, military planners had planned to use land-attack cruise missiles launched from Navy destroyers cruising off shore from Syria. For weeks, the Navy had four destroyers floating off shore, waiting for the order to strike that never came.

Using ships negates the need to seek permission from countries where U.S. warplanes are based. Land-attack Tomahawk missiles can travel 1,500 miles to strike their target and carry a warhead with 1,000 pounds of conventional explosives.

Among the options that Pentagon planners had developed for Trump: the airfield, military command-and-control centers, air defense systems and troops.

Any attack puts at risk the hundreds of U.S. special operations troops in eastern Syria who are advising local ground forces in their fight against the Islamic State, or ISIS. The concern, according to the official, is that Assad could order a counter strike, targeting the Americans. There is also the risk that the attack could kill Russian troops who have been supporting the Assad regime.

The Pentagon, which has been bombing ISIS targets in Syria since 2014, can provide extra air patrols to protect those troops. But they still would be vulnerable to attacks by surface-to-surface missiles fired by Syrian forces.

The strike followed an attack on a rebel-held city in northern Syria with apparent chemical weapons. Autopsies on three Syrians who died after being brought to Turkey for treatment suggest the banned nerve agent sarin was used in the attack, the Turkish Health Ministry said.

Turkey, which also is involved in the fighting, has long pushed for Assad’s ouster.

Russia said the deaths were caused by a Syrian strike on a terrorist chemical lab, but the United States, other nations and human rights groups rejected that claim as baseless.

While Trump has been criticized for cozying up to Russia, officials in that country warned him against military strikes.

“We have to think about negative consequences, negative consequences, and all the responsibility if military action occurred will be on shoulders of those who initiated such doubtful and tragic enterprise,” said Vladimir Safronkov, Russia’s deputy envoy to the United Nations, speaking with reporters at the U.N.

Asked what those consequences might be, the Russian diplomat cited ongoing problems in Iraq and Libya.

Trump had long shared that opinion. He had previously urged the United States to support Assad against rebel groups fighting him, many of which are aligned with al-Qaeda. In 2013, he criticized Obama for contemplating strikes without getting congressional approval. But the images of the dead children spurred an about-face.

Now, in the early morning darkness in Syria, Trump has responded with force.