7/20 – UK Foreign Office warns of a heightened risk of terrorism against aviation in Egypt. Add’l security measures implemented for flights between Egypt and the UK.

Quoting from the bulletin:

The U.S. continues to face one of the most challenging threat environments since 9/11, as foreign terrorist organizations exploit the Internet to inspire, enable, or direct individuals already here in the homeland to commit terrorist acts. Homegrown terror suspects increasingly rely on technology, such as end-to-end encrypted social media applications, to avoid detection.

Terrorist groups are urging recruits to adopt easy-to-use tools to target public places and events. Specific attack tactics have included the use of vehicle ramming, to include the use of rental vehicles, small arms, straight-edged blades or knives, homemade explosives, and poisons or toxins.

Some terrorist groups overseas are using battlefield experiences to pursue new technologies and tactics, such as unmanned aerial systems and chemical agents that could be used outside the conflict zones. Many of these technologies are readily available. Additionally, terrorists continue to target commercial aviation and air cargo, including with concealed explosives.

Violent extremist media encourages individuals worldwide to launch attacks using all means possible. Continued U.S. and partner successes in disrupting and defeating terrorists on the battlefield may encourage homegrown terrorists to carry out acts of violence in the homeland instead of attempting to travel overseas to fight, or in retaliation for apparent losses.

Additionally, foreign terrorist fighters who have acquired training and battle-tested terrorism experience may flee from terrorist-controlled territories with a desire to conduct attacks elsewhere, including the United States.

DHS and the Federal Bureau of Investigation (FBI) continue to provide guidance to state, local, tribal and territorial partners related to the current threat environment. DHS continues to support the private sector to provide risk assessments and to coordinating security measures with business owners and operators. As such, the public may continue to observe law enforcement and security activity in and around public places and events.

So as to highlight the relevance of the DHS bulletin, this past Saturday afternoon, AlertsUSA subscribers were notified that British Airways had canceled all flight service to and from Cairo, Egypt due to unspecified security concerns. This was followed by the Foreign and Commonwealth Office issuing a travel warning for Egypt citing a “heightened risk of terrorism against aviation.” Lufthansa later followed the British Airways move, but flights from both airlines have now resumed following reviews of security protocols and procedures. Few details have been provided about the specific threat prompting the flight cancellations.

The airline’s concerns are not unwarranted. Readers are reminded that on October 31st, 2015, Metrojet Flight 9268 flying from Sharm El Sheikh International Airport in Egypt to Saint Petersburg, Russia was destroyed by a bomb above the northern Sinai, killing all 224 passengers and crew who were on board. Shortly after the crash, the Islamic State’s Sinai Branch claimed responsibility for the incident in a written statement and on video, both of which were distributed globally via social media. The group also published photographs of what it said was the bomb in their online magazine known as Dabiq. That device was contained within a can of Schweppes Gold pineapple soda.

AlertsUSA continues to monitor the domestic and international threat environment around the clock and will immediately notify service subscribers, via SMS messages to their mobile devices, of new alerts, warnings and advisories or any developments which signal a change the overall threat picture for American citizens as events warrant.

7/22 – 22 of 23 states in Venezuela without electrical power. More than 90% of the country’s telecommunications infrastructure offline. AlertsUSA monitoring.. 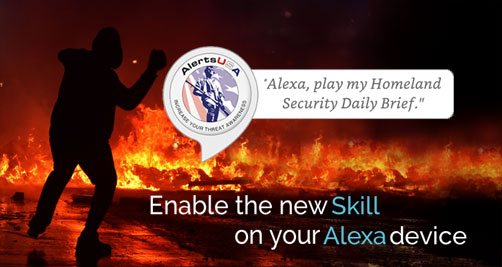 Radicalization of Kids: A Global Threat

Radicalization is now easy for the extremists, thanks to technology, the new weapon being brandished by Islamist terrorists in accordance with the mandate of the Muslim Brotherhood to “weaken the West from within”. Kids today, as early as three years old, are on YouTube watching videos. Unfortunately, it has never been easier for extremists — from white supremacists to radical Islamists — to target vulnerable children and penetrate a child’s consciousness.

How the U.S. Could Lose a War With China

From Daesh to Diaspora:
Tracing the Women and Minors of Islamic State

The self-proclaimed Islamic State (IS) has been described as a hybrid terrorist organization and conventional army, a religious, millenarian group, an insurgency, and a pseudo-state, amongst others. It produced and disseminated propaganda at an unprecedented rate, and reached a wider global audience than any past terrorist organization in history. As it increasingly seized territory and resources, at its peak in late 2014 it was believed the group controlled over 100,000 km² of land and the 11 million residents therein. IS and those inspired by the group have thus far carried out over 4,300 attacks across at least 29 countries, demonstrating the group remains a significant and shared global concern.

These are the approximate positions of the U.S. Navy’s deployed carrier strike groups and amphibious ready groups throughout the world as of July 22, 2019based on Navy and public data provided by the U.S. Naval Institute. In cases where a CSG or ARG is conducting disaggregated operations, the chart reflects the location of the capital ship.

China: US ‘in pursuit of absolute military superiority’
Iran Test-Fires Medium Range Missile, US Says
More than 100 killed in Syria air raids in past 10 days, UN says
Russia and Syria step up airstrikes against civilians in Idlib
Syria’s Assad Is Deliberately Starving Thousands of Refugees
Iran observes all U.S. ships in Gulf region: Iran navy chief
Israeli minister boasts his country has been ‘killing Iranians’
Trump says it is getting harder for him to want to negotiate with Iran
Iranian Documentary Reveals How CIA Recruited Agents
Iran claims to have arrested 17 CIA spies