11/1 – NYPD: 8/31 suspect planned attack for weeks, carried out in the name of ISIS. Expect expanded security in run up to and during 11/5 NYC Marathon. See email.

10/31(c) – Eyewitnesses report rented truck mowed down at least two on bike path, then smashed into school bus. Suspect in custody was shot by police.

10/31(b) – Incident near West Street & Chambers. NYPD confirms one shooter in custody. Multiple victims, some mowed down by vehicle on bike path.

On Tuesday AlertsUSA subscribers were notified of reports of an active shooter in the Lower West Side of Manhattan. As details began to emerge soon thereafter, it turns out the shots were fired by police after a truck was driven down a pedestrian walkway and bike path, intentionally running over pedestrians and bikers before slamming into the side of a school bus. The driver, 26 year old Sayfullo Habibullaevic Saipov, exited the vehicle brandishing imitation firearms and was shot in the abdomen by an NYPD officer.

Eight people were killed and at least nine injured in the attack.

According to DHS, Saipov is a naturalized U.S. citizen from Uzbekistan who entered the country in 2010 on a diversity visa. New York authorities report Saipov frequented/liked/commented on social media accounts containing material related to the Islamic State.

Following the suspects arrest and initial treatment at Bellevue Hospital, Saipov was interviewed by law enforcement and revealed the following:

1. He was inspired to carry out this particular type of attack by Islamic State videos.

2. He intended to use the truck to strike pedestrians along the West Side Highway, then proceed to the Brooklyn Bridge to continue the attack.

3. He wanted to display Islamic State flags on the truck but decided against it as it would draw undue attention.

4. During the police interview he requested to displays the Islamic State flag in his room and stated he felt good about what he had done.

5. He began planning the attack approximately one year ago.

6. Specifically chose to strike on Halloween because he believed there would be more civilians on the street for the holiday,

These and other statements can be read within the official federal complaint available HERE (PDF).

During the investigation, handwritten material was recovered near the suspects truck expressing affinity for the Islamic State and and the fact that the group would endure forever.

According to the FBI, one of Saipov’s cellphones contained 90 videos and approximately 4000 still images, most of which was ISIS-related propaganda, torture shots, etc..

Readers are reminded that on November 11th of 2016, AlertsUSA warned subscribers of the release of a new issue of the Islamic State’s Internet magazine known as ‘Rumiyah’ (Rome) calling on Muslims to carry out more vehicular attacks similar to that which occurred in Nice, France on 7/16.

Readers are also reminded that on August 23rd of this year, AlertsUSA warned subscribers of the release of an image on Islamic State social media channels showing a hand holding an iPhone showing the ISIS flag w/ the NYC skyline in background, along with a warning that ISIS supporters are in the U.S.. 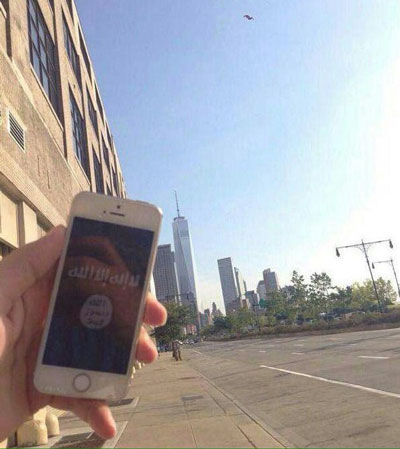 AlertsUSA again warns readers that the Islamic State continues to call on supporters in the West to carry out more vehicular-style attacks and has previously highlighted Thanksgiving Day parades as an ideal target. If public events of this type are in your upcoming holiday plans, it behooves you to be security minded, to not position yourself in vulnerable locations and to maintain a high level of vigilance and awareness.

11/2 – Antifa and other leftist orgs planning protests and demonstrations in more than 20 cities across the US on 11/4. Violence and hooliganism expected. See email.

11/1(b) – London Black Cab reported to have driven onto sidewalk and crashed into a crowd. Numerous injuries reported. Heavy police presence. Add’l alerts as warranted.

10/31(b) – AlertsUSA monitoring reports of active shooter on Randall Avenue in the Bronx. At least 4 injured. Suspect at large. Add’l alerts as warranted.

10/30(a) – Dir. of Korea Meteorological Admin warns gov that another DPRK nuclear detonation could trigger collapse of mountain site and release of radioactive material.

POTUS heads to Asia, concerns are growing over possible war with DPRK
Bowe Bergdahl receives dishonorable discharge, avoids jail time
How 470,000 Docs from UBL’s Compound Finally Got Into the Open
Turning Point: The F-35 May Not Deliver
Despite International Support, Venezuela’s Opposition Is Beginning to Unravel
The U.S. Isn’t Prepared for the Next Recession
Cuba accuses US of lying about alleged attacks on diplomats
11 journalists killed in Mexico this year
US politicians skeptical over growing military presence in Africa
Trump Warns ISIS Will Pay a ‘Big Price’ After Deadly NYC Truck Attack
Navy head concerned with sailors’ ability to drive ships
15 Subs Kept Out of Service: 177 Months Of Drydock Backups
The DoD Is Quietly Developing A NextGen Long-Range Air-To-Air Missile
DoD declares Army, Navy cyber teams fully capable

N. Korea Possibly Preparing New Missile, Nuclear Tests
North Korea’s ICBM Attack Range Will Extend To US By 2018
US bomber drills anger North Korea as Donald Trump heads to Asia
North Korea calls for a halt to ‘brutal’ sanctions
North Korea Defector Warns Military Will React to Any Sign of U.S. Attack
Xi Jinping sends rare message to Kim Jong-un, relations could be improving
Xi instructs army to improve its readiness for war
Containing China on the Open Seas
Trump warns China Japan could take action on N. Korea
In the US-China Relationship, Time is Not on Our Side. Or Is It?
Kim Dotcom: 2012 raid near Auckland ends in settlement

The U.S. Dept. of State is the authoritative federal source for information on the security situation at travel destinations worldwide. With tensions rapidly increasing in most regions, readers planning on international travel, even to such common destinations as Canada, Mexico or the Caribbean Islands, are strongly encouraged to do a little research on the security situation well prior to departure.