12/26 – N. Korea is preparing to loft a new satellite into space, a move widely believed to be a continuation of weapons testing. More via email.

On 9 occasions this week AlertsUSA subscribers were notified via SMS messages to their mobile devices regarding safety and security matters. Most important for this report, on Tuesday, subscribers were informed of reports that N. Korea is preparing for a new satellite launch. The report comes just days after the North’s ruling party newspaper Rodong Sinmun reasserted the regime’s right to launch satellites and develop its space technology. In a commentary published on Monday and titled “Peaceful Space Programmes are Sovereign Countries’ Legitimate Rights”, the daily said Pyongyang’s satellite launches “absolutely correspond” with international laws concerning space development.

Most western intelligence services view such launches as a continuation of development activities for N. Korea’s ballistic missile and weapons programs.

At present, N. Korea has two satellites in orbit, both of which are formally registered with the United Nations Office for Outer Space Affairs. The most recent launch took place on February 7, 2016 as the United Nations Security Council was deciding on sanctions following a January 6, 2016 nuclear weapons test. The launch was also timed to celebrate the 74th birthday of the late leader Kim Jong-il on February 16.

Thus far in 2017, North Korea has successfully launched three intercontinental ballistic missiles capable of delivering warheads to most, if not all of the continental United States. The remaining technological hurdle they have not yet demonstrated clearing is the proper shielding of a warhead to enable it to functionally survive the rigors of reentry into the atmosphere. And herein rest the concerns of another satellite launch.

Readers are remind that on September 21, AlertsUSA subscribers were informed of a threat by N. Korea to conduct an atmospheric nuclear test over the Pacific.The threat was issued again on November 28th by a senior N. Korean official who indicated that an above-ground nuclear detonation or a “large scale hydrogen bomb” test was necessary for the DPRK to send a clear message to the Trump administration that it possesses an effective nuclear deterrent.

In the last week, western intelligence analysts have voiced speculation that N. Korea’s next satellite launch could in fact end up being a test of a hardened reentry assembly proved out with an atmospheric detonation of a nuclear or hydrogen warhead.

At present, no formal notices to mariners or aviators have been issued. Previous N. Korean satellite launches have been preceded by such notices highlighting impact and drop zones for spent stages and fairings. As a result of these notices, S. Korea has been able to recover rocket debris yielding significant intelligence value. For example, debris recovered from the Feb. 7, 2016, rocket launch revealed several foreign-sourced commercial components, including bearings with Cyrillic characters indicating Russian-origin, a Chinese infrared camera, and pressure transmitters manufactured in Britain.

To date, the United Nations Security Council has adopted eight major sanctions resolutions on N. Korea in response to the country’s nuclear and missile activities since 2006. Needless to say, another rocket launch, regardless of the intent, would be viewed as highly provocative.

Late this week, N. Korea announced there will be no change to it’s nuclear policy in 2018 and that it will continue to enhance its nuclear capabilities in the future declaring the communist state an “invincible” and “responsible” nuclear power.

AlertsUSA continues to monitor events on the Koren Peninsula and will immediately notify service subscribers, via SMS messages, of new alerts, warnings and advisories or any developments which signal a change the overall threat picture for American citizens as events warrant.

12/27 – New Islamic State video “Inside the Khilafah #6 – A Message To The Crusading Trump” calls on followers to carry out attacks in the U.S. See email for more.

12/27 – U.S. Embassy and Consulates in Russia have issued an emergency msg for U.S. citizens regarding the supermarket explosion in St. Petersburg. See email.

12/28 – US and EU police on high alert in run up to New Year’s celebrations due to heightened terror threat environment. See email for more info.

Law enforcement across the U.S., Europe and Australia are on high alert with the approach of New Year’s Eve celebrations. Large public gathering in most major metropolitan areas will see increased police presence, high security zones and bag restrictions.

The annual New Year’s Eve celebration in Times Square is is expected to draw approximately 1-2 million people. An area roughly 22 city blocks long and three long blocks wide will be sealed off from both vehicle and pedestrian traffic with cement blocks, sand-filled trucks and other vehicles blocking the streets leading into the area.

Revelers entering that secure zone will be screened at a dozen access points where they will pass metal detectors, vapor wake dogs and officers with portable radiation detectors. Large backpacks are not allowed. All small bags will be searched. Most will also experience a second round of security screening before entering spectator pens. Those who leave the pens are not allowed to re-enter.

Overly strict? Perhaps, but as broad-reaching political correctness continues to dominate the response to Islamic terrorism in most western nations, this is the result.

Readers are reminded that the extra precautions for New York follow two recent terrorist attacks in the city. On Dec. 11, four people were injured after a man detonated an improvised explosive device at the city’s busiest commuter hub near Times Square during rush hour. On Oct. 31, eight people were killed and a dozen more injured after a rented truck was intentionally plowed into pedestrians on a bicycle path near the World Trade Center. Times Square itself was targeted in May of this year by a car driven through crowds of pedestrians for more than three blocks before slamming into a metal barrier installed around the square’s plazas.

Readers are also reminded that the Islamic State and al Qaeda have issued multiple threats and calls to action for followers during the past two months (see this, this, this and this.)

This week, AlertsUSA subscribers were informed of new video from the Islamic State’s al-Hayat Media Center featuring an injured American jihadist fighter calling for attacks in U.S.. The speaker, who identifies himself as ‘Abu Salia from America,’ issues threats to President Trump, calls on “brothers with limbs or no limbs” to “get a knife” or “take advantage of the fact you can easily get a rifle or pistol” in the U.S., and to “answer the call, rise and strike.” 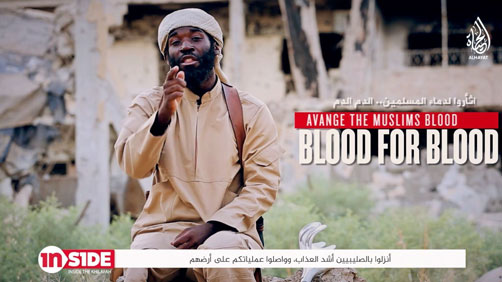 AlertsUSA continues to monitor the overall domestic and international threat environment and will immediately notify service subscribers, via SMS messages, of new alerts, warnings and advisories or any developments which signal a change the overall threat picture for American citizens as events warrant.

Is the U.S. Military Ready for a War with North Korea?
Here’s All The Sweet Gear Soldiers Will Rock Downrange In 2018
Donald Trump demands China does more to reign in North Korea
US says Romanians hacked Washington DC police cameras
Officials: Nearly half of Puerto Rico clients without power
Mexico confronts surge in violence against women
Navy Seeks Better Sleep For Crews w/ New Rest Guidelines, Special Glasses
The Top Leaks, Hacks, And Exposed Secrets Of 2017
Venezuelans protest over pork shortages during Christmas
Don’t Raise a New Year’s Toast for Defeating ISIS Just Yet
The Next Revolution In Military Affairs: How America’s Military Will Dominate