12/3 – US embassies & consulates worldwide on heightened alert in anticipation of POTUS announcing US recognition of Jerusalem as Israel’s capital. See email.

12/5(b) – State Dept. issues security msg for US citizens in Israel. Warns of ‘Day of Rage’ on 12/6. Tied to forthcoming move of embassy to Jerusalem. See email.

12/6(a) – Large wave of new threats of attacks on US and interests abroad on ISIS & AQ social media in resp to upcoming Trump Jerusalem declaration. Vigilance urged.

12/6(c) – POTUS announces official U.S. recognition of Jerusalem as the capital of Israel, directs Dept. of State to begin process of moving embassy.

12/8 – AlertsUSA cautions anti-American/Israel protests are taking place in dozens of cities across Canada, EU and the ME. Low profile urged in the coming days.

On 15 occasions this week AlertsUSA subscribers were notified via SMS messages to their mobile devices regarding safety and security matters. Beginning last Sunday, AlertsUSA began warning subscribers that US embassies & consulates worldwide were on heightened alert in anticipation of President Trump’s formal announcement of U.S. policy recognizing Jerusalem as the capital of Israel and the directive to begin the process of relocating the U.S. Embassy to the city from Tel Aviv.

The President’s announcement was made on Wednesday

From Sunday to the present, Islamic State and Al Qaeda-linked social media accounts have been on fire with threats of attacks on U.S. citizens and interests at home and abroad. US Embassies across Europe are warning American citizens of need for caution & personal security awareness noting that recognition of Jerusalem as the capital of Israel will likely result in protests, many of which have already begun.

On Wednesday, the State Department issued a new Worldwide Caution warning of the continued threat of terrorism, violence, and criminal activity against US citizens & interests globally.

According to the warning statement:

“Terrorist groups including ISIS, al-Qa’ida, their associates, and those inspired by such organizations, are intent on attacking U.S. citizens wherever they are.“

“Extremists may use conventional or non-conventional weapons to target U.S. government and private interests. Terrorists are increasingly using less sophisticated methods of attack to more effectively target crowds, including the use of edged weapons, pistols, and vehicles as weapons. Extremists increasingly aim to assault “soft” [ lightly protected ], targets, such as:”

“In multiple regions, terrorists, guerrilla groups, and criminals seek to kidnap U.S. citizens to finance their operations or for political purposes. The Department also remains concerned that terrorists could again seek to down aircraft using concealed explosives or hijack commercial flights.“

On Thursday, AlertsUSA subscribers were also informed of a formal call by al Qaeda for followers to carry out attacks on America, Israel and “Crusader allies everywhere” (see this and this).

“The surest and shortest way to confront the aggression and arrogance of the Pharaoh of the age – America – is Jihad in the Way of Allah, by targeting its vital interests and the interests of its Zionist and Crusader allies everywhere. This is a simple equation; just as you kill us, you shall be killed; just as you bomb us, you too shall be bombed, and the one who initiates hostilities shoulders the blame.” 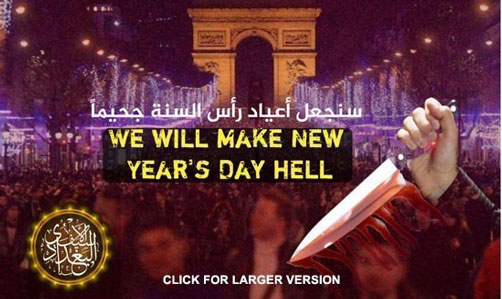 It is important to bear in mind that many, but not all, attacks by the Islamic State in Western countries have been preceded by the release of propaganda posters and other public threats. Thus, notification of the release of such posters should be duly noted and kept in mind if you live in or are traveling to those locations.