Islamic State Threatens Attacks on the U.S. and Israel

4/19 – New Islamic State propaganda posters show President Trump and Israeli PM Netanyahu on their knees and threaten attacks on US and Israel. See email for more.

4/20 – US and EU synagogues, Jewish community ctrs & schools on heightened alert flwg threats of retaliation by Iran for IDF strikes on assets in Syria. Monitoring…

On Thursday of this week AlertsUSA subscribers were notified via SMS messages to their mobile devices of the release of new Islamic State propaganda posters threatening attacks on the U.S. and Israel.

One poster depicts President Trump as a prisoner, on his knees in a church and at knife point, along with the threat; “SOON IN YOUR COUNTRY.”

A second poster depicts President Trump wearing a battle dress uniform with a woodland camouflage pattern, on his knees with hands bound and at gunpoint, with the city of Seattle burning in the background. The threat message on this poster states the following:

“Soon…the calamities will be in your lands until it is filled with charred skulls.”

A third poster, which is particularly compelling due to it’s relationship to current significant events, shows President Trump and Israeli PM Netanyahu on their knees in front of a hooded, Jihadi John-style executioner. The geographic placement of the scene is the courtyard of the Al-Aqsa Mosque on Temple Mount in Jerusalem. The poster carries the following message in both English and Arabic:

“OH JEWS AND WORSHIPPERS OF THE CROSS”

“WE SWEAR TO BREAK YOUR NECKS AND SHED YOUR BLOOD IN ALAQSA FRONT YARD AND EVERYWHERE ELSE, THIS IS THE PROMISE OF ALLAH AND WE WILL MAKE IT COME TRUE. BEWARE. THE COMING WILL BE THE MOST TERRIBLE AND BITTER” 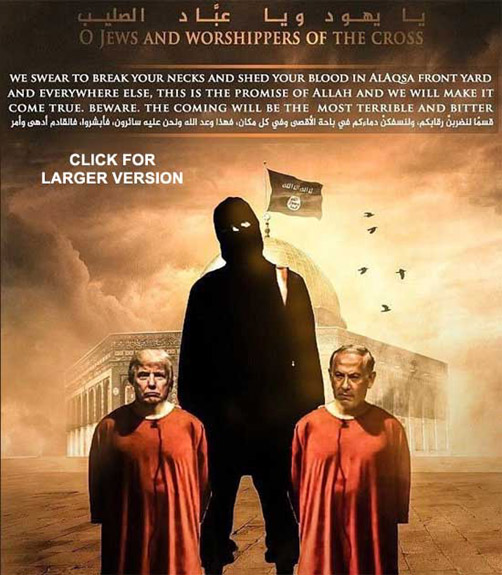 This poster scene and associated threat are significant as on December 6, 2018, President Trump reaffirmed formal U.S. recognition of Jerusalem as the capital of Israel and called on the State Department to begin efforts to move the U.S. Embassy to the historic city from its current location in Tel Aviv. The dedication ceremony for the interim facility, which will be located on the grounds of the U.S. Consulate General in Jerusalem, is scheduled for May 14, 2018. This date also marks the 70th anniversary of the founding of the State of Israel on the standard Gregorian calendar.

The date also corresponds with what is known to Muslims as ‘Nakbah Day’, an annual day of Palestinian mourning, protests and general mayhem marking what they refer to as the “catastrophe” of Israel’s founding.

Readers are reminded that President Trump’s December announcement sparked outrage around the globe. Within hours, both the Islamic State and al Qaeda issued formal calls for followers to carry out attacks on America, Israel and their “Crusader allies everywhere.”

Just days later on December 10, the U.S. Embassy in Beirut, Lebanon was attacked with protesters calling the US “the enemy of Palestine.”

On December 11, a bomb was detonated at the Port Authority Bus Terminal in Manhattan. Soon thereafter, the Islamic State praised the attack and promised there would be more to come as a result of the President’s Jerusalem declaration.

On March 16, a vehicle ramming attack occurred in Hermesh, Israel killing 2, and injuring 5. Hamas claimed responsibility for the attack saying it was in response to US decision to move the embassy to Jerusalem and that more attacks would be coming.

On March 17, AlertsUSA subscribers were informed of a new publication by Al Qaeda in the Arabian Peninsula calling for attacks on Americans in retaliation for U.S. defense of the Jewish state.

Readers are also reminded that the establishment of a Palestinian State and the complete destruction of Israel has been a battle cry of Islamic terror organizations and Muslim nations for decades. Thus, the U.S. decision to move the embassy from Tel Aviv to Jerusalem and formalizing recognition of the city as Israel’s undivided capital, should not be underestimated. Big trouble is on the horizon.

U.S. diplomatic facilities worldwide are currently on a heightened state of alert. The opening of the new embassy is already triggering growing anti-American sentiment across Europe, with many countries holding vehement anti-Semitic prejudices.

AlertsUSA warns subscribers to expect an increasing tempo of threats and attacks in the coming months both domestic and abroad. Caution and vigilance are urged, particularly for churches, synagogues, Jewish community centers and schools.

This is the 8th in a series of short, insightful videos by Dr. Bill Warner, a highly respected expert on political Islam. In 2006, he founded the Center for the Study of Political Islam (CSPI) to further the study of the politics of the ideology of Islam and its dangerous ramifications for Western Civilization.

Sharia law is the most important part of Islamic doctrine. Sharia is Islam; Islam is Sharia. Sharia does not allow free speech. It is forbidden to make a joke about Mohammed. Blasphemy is forbidden. Sharia says that our Constitution is manmade and a product of ignorance. The US is following Sharia when it allows the UN to determine that Muslim refugees come to America and not Christians.

All Kafirs (unbelievers) are involved in the Sharia; it is just a matter of how much. We should recognize it and resist its expansion in our civilization. 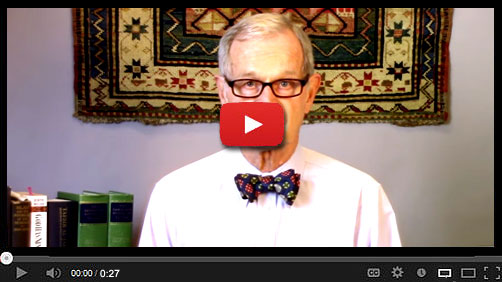 Moderate Muslims Cannot Save Us (4:17)

Russia: our response to U.S. sanctions will be precise and painful
Russia blocks millions of IP addresses in battle against Telegram app
Military grade firearms increasingly available to terrorists in Europe
Russian cyber attack should be met by counter-strikes
Great powers race for space war supremacy
EU rejects Irish border proposals and says Brexit talks could still fail
‘We are truly sorry’: Eta apologises for four decades of deadly violence
After US-led strikes, Russia has ‘no moral barriers’ on S-300 deliveries to Syria
Russian Navy gets nuclear sub, 3 warships and Kalibr cruise missiles this year
Here Are All the Submarines of the Russian Navy in One Infographic
Post-Soviet states to develop integrated system of radar identification