What Happens If TSHTF ( major event ) While You’re Flying On A Business Trip?

Not long ago I seen a comment on the SHTF Facebook page asking what to do if you’re flying on business or vacation and something happens.  Many of the items in your BOB would be illegal on an airplane, so what’s a prepper to do?

As it turns out I used to be a business traveler on a regular basis.  Most weeks I was away from home from Sunday afternoon to Friday evening (5 1/2 days) and I flew anywhere from two to four times a week depending on where they needed me.  One day I’d be in Toronto, Canada and the next day they might fly me off to Jacksonville, Florida, or any and all points in between.  As a matter of fact I was stranded after 9/11 for a couple of weeks.

So… I know a little bit about flying.

I think flying is even more difficult today than it was then because in addition to the enhanced security they came out with after 9/11 they also have the airlines nickel and diming every move you make once you hit the airport.  An extra GHB (Get Home Bag) could really run the price of traveling up for you.

One of my big fears back then came true when I was grounded after 9/11.  My next big job was in Indianapolis, but what would I have done if I needed to get home to Maine?  Cell phone service was spotty at best and flying was next to impossible in the days following the attack.  I managed to rent a car and could have driven home if I needed to, but what if traffic was shut down and I had to go on foot?

So let’s assume for a minute that there’s been a traffic lockdown, or maybe the grid is down, and now I’ve got to walk home.  Or at least find a place I can hole up because now I’m on my own.  I have very little in the way of a BOB because security won’t let me travel with much of anything that might prove useful in the way of survival.  No knife, no gun, no fuel for a stove… you get the picture.  Remember, this was a way of life for me.  There’s no way I would be able to financially make it feasible to have a firearm at every destination I went to. 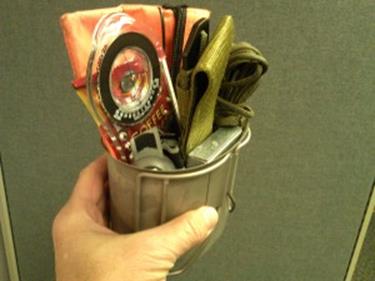 The best thing to have is plan.  “Chance favors the prepared mind,” right?

The first thing I’d want is a large reserve of cash on my person at all times.  At least $500.  Why?  I think that shortly after TSHTF people are going to be buying things in a frenzy such as food and other items from supermarkets and hardware stores.  Even if currency is about to become extinct if you have some cash on you people will be accepting it over credit or debit cards.  Why?  Because people love to make money off emergencies.  Ever notice how gas goes out of sight after a storm knocks the power out?  People get greedy and want to make as much money as they can off the disaster. 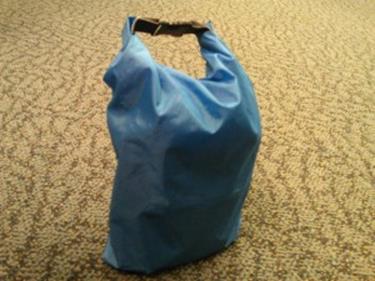 If I have $500 on me I’d gladly trade it all for a good pair of boots, a sleeping bag, pack, mat, knife, stove and a few other items as well as dehydrated food, gorp, or whatever else they might have for hiking food.  In a true large scale emergency money won’t mean as much as the stuff you can buy with it in the first few hours.  The key is to know when to buy.  As soon as you think there’s an issue don’t hesitate.  Get to a sporting goods store, a Walmart, a hardware store, or whatever and trade that cash in for stuff that will likely be much more useful than pretty bills.  Hell, if you’re lucky you might even be able to pick up a shot gun and some shells.  That depends on how much money you have of course.  $500 won’t get you all the things I listed above, so you’ll have to pick and choose carefully.  People will wise up eventually, but if you get in quick you might catch them while they’re still thinking the dollars are worth something.

You might also want to carry gold and silver, but I’m not sure how powerful the attraction will be to those with goods to sell.  Whether it be cash or gold make sure you have enough to get what you need if TSHTF.

set of hiking clothes in your luggage.  I have some 5.11 tactical pants that I wear at work and can away with because they look semi-professional.  Combine these with a good pair of boots and you’ve got the beginning of a bug out kit.  A backpack filled with goodies is always a good idea if you can get away with it, but even a computer bag with a few essentials can be useful.

My computer bag has a small bug-out kit in it.  Some of the items it contains are a small knife, cordage, firesteel, canteen cup, head lamp, whistle/compass/match case, a real compass, and a small stove.  They sit nestled right in my computer bag inside of a little water proof bag and nobody is the wiser.  (Shhhhh.)  You could also add a garbage bag or even a small poncho to help keep rain off in case of an emergency if you don’t always carry a rain jacket with you.

But how are you going to get home?  There’s the real kicker.  If you’ve traveled to where you are on a plane there’s a pretty good chance you’re at least hundreds of miles from home.  Now you’ve got to figure out a way to get back.

If there are no cars on the road or planes in the air you might try seeing if there are any railroads nearby that you might catch a ride on.  Be prepared though because RR personnel don’t look kindly on people hitching free rides on their trains.  Normally I wouldn’t suggest something like this; however, in the event of an emergency like the one I’m describing all bets are off.  “Do no evil to others,” would be one of the rules of the road, unless they do evil to you first.

If there’s a river nearby heading in the right direction you might look into catching a ride on a boat or buying a canoe or kayak.  If you’re on the coast it’s possible a boat heading in your direction might get you at least partially there.  Maybe you could trade work for safe passage.  Look around and think creatively.

But no matter what you do you can rest assured that you’ll be hoofing it at least part way.  That’s why a good pair of shoes and a pack will be so important.  I hope your camping and survival skills are up to par because you might be doing a lot of it.

With a pack you can pick stuff up as you go if you have to.  I like to play a game when I’m out running or walking along side the road.  I keep looking to see what I could use in a survival situation if it ever came down to it.  The roads here in Maine are kept pretty clean, but there are always things like sheets of plastic that could be used for shelter, bottles and cans for storing and disinfecting water, various tools, lighters, paper, and on one occasion I even found an axe!  There are plenty of ways you can survive on the move if you’re resourceful enough to look around as you move.

What About the Family?

First, let’s assume you have a family.  If you’re traveling on business this probably means that your family is at home, which is likely to motivate you to want to get there as quick as you can.  Before leaving make sure they know what the drill is for emergencies and know what to do.  For example, does your wife know how to start the generator if needed?  Can she shoot a gun if it comes down to it?  How about your kids?  Do they know what to do if you’re not around?  Do you have a plan on what they should do if you can’t communicate.

If not it might be time to start bringing them up to speed.

If you’re on vacation then your family is likely with you.  In my mind this is a much tougher scenario because you not only have to move yourself, but now you’re responsible for getting your family home safely through who knows what kind of trouble.

Again, have a plan.  In some cases it might make sense to try and stay where you are until the emergency blows over.  Or if you have older kids and a wife who is willing and able maybe you can try to make it home.  Either way is fraught with danger and there will be some very tough decisions to make for the leader.  It all depends on the situation and capability of each family member.

Once more, having extra cash or gold on hand will likely benefit you at least in the short term.

I’m going to wrap it up here, but I’m sure there are many other things you can do to prepare for traveling by air.  How about ya’ll coming back with a few ideas for your fellow travelers?