Why Did The Treasury Department Just Purchase Thousands of Survival Kits For Bank Examiners?

In recent years the U.S. government has been making massive preparations. They’ve been stockpiling food, riot gear, automatic weapons and billions of rounds of ammunition. While no one in Federal emergency planning services is talking any specifics, recent exercises over American cities and military training simulations all suggest that whatever it is that the government is preparing for is a very serious affair. One possibility, as evidenced by war gaming simulations being performed by intelligence agencies, Homeland security and the Pentagon is that the U.S. economy could collapse under the weight of trillions of dollars in debt. Another points at the real possibility of a widespread attack on the U.S. power grid that could throw the country back into the Stone Age.

Whatever it is, it should be clear that preparations are being made.

The latest eye-opener comes from the U.S. Treasury, a department tasked with managing the country’s debt as well as the banking system as a whole. According to a new report the Treasury Department has ordered over $200,000 Survival Kits for as many as 3,814 employees who oversee the federal banking system.

It’s not clear why the federal government has ordered the kits, but perhaps they are expecting some sort of disturbance to take place and they want their employees to be prepared for it. According to Zero Hedge, the kits will be delivered to every major bank in the United States and include Wells Fargo, JP Morgan Chase, Citigroup and Capital One.

The “kits,” which contain items such as high calorie food rations, emergency water, first aid supplies and an emergency radio, suggest that the Treasury Department wants their people to be prepared for scenario where they may be out of contact from officials for 24 – 48 hours.

A full list of the specifications for the survival kits has been made available by Free Beacon: 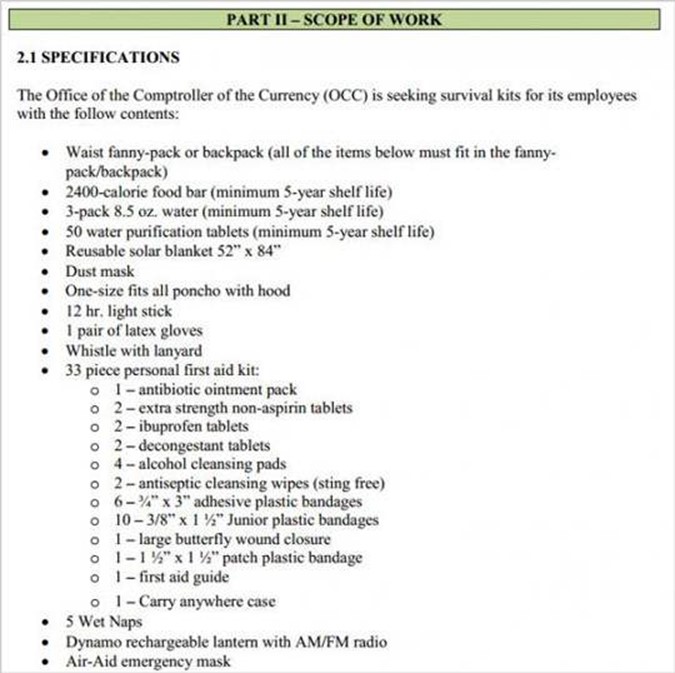 The agency has roughly 3,814 employees, each of which would receive a survival kit. The staff includes “bank examiners” who provide “sustained supervision” of major banks in the United States.

It is not clear why the Treasury Department is ordering the kits.

This, of course, begs the question: why?

Does the Treasury Department know something we don’t? And why bank examiners? Is it possible someone, somewhere knows something significant is about to go down?

They certainly understand that the U.S. economy and financial system are susceptible to massive shocks. Last year they released a report warning of a catastrophic event that could last generations should the U.S. government fail to secure additional credit:

“In the event that a debt limit impasse were to lead to a default, it could have a catastrophic effect on not just financial markets but also on job creation, consumer spending and economic growth,” the report said.

“Credit markets could freeze, the value of the dollar could plummet, US interest rates could skyrocket, the negative spillovers could reverberate around the world, and there might be a financial crisis and recession that could echo the events of 2008 or worse.”

“Considering the experience of countries around the world that have defaulted on their debt, not only might the economic consequences of default be profound, but those consequences, including high interest rates, reduced investment, higher debt payments, and slow economic growth, could last for more than a generation,” the report states.

It’s only a matter of time, it seems.

And, while the survival kits purchased by the Treasury Department are basic units that provide about two days’ worth of supplies, it’s notable that they have purchased these kits specifically for their bank examiners. In the preparedness community we call it a bug out bag, or depending on the circumstances, a get-home bag. They are part of a broader preparedness strategy designed to provide supplemental support to those who are away from home and out of touch in the event of an emergency. So the specific kits being distributed by the Treasury Department will provide limited support at best and are not full-out multi-month preparedness kits.

Nonetheless, we are seeing the government not only regionalize distribution centers around the country and stockpile typical “prepper” supplies, but they are also now getting their individual employees and agents prepared.

Those who have yet to prepare for major disasters should do so now, because if whatever Treasury and other Federal agencies expect to happen actually happens then all bets are off.

The reason, for example, that someone would need a 2,400 calorie food bar like the one in these kits is because store shelves would likely have been looted and no food will be available. Tess Pennington, author of the bestselling disaster guide The Prepper’s Blueprint, explains:

When you take the time to understand how a breakdown behaves and how it progresses, only then can you truly prepare for it

Source: Anatomy of a Breakdown

As part of a complete preparedness strategy Pennington suggests having an emergency bag similar to the one being purchased by the Treasury Department – but with a little more hardcore survival built in because during a serious and widespread emergency scenario a couple thousand calories and a survival blanket may not be enough:

Someone in the upper echelons of government understands the threats being faced by Americans. Efforts are being made from coast-to-coast to prepare for these threats. But, as even the director of Homeland Security has warned, in an emergency every individual needs to make preparations for at least a two week period during which food, gas, clean water and emergency response may be unavailable.