Why Were The Police In Ferguson Told Not To Stop The Rampant Looting On Friday Night?

On Friday night, the city of Ferguson, Missouri was absolutely packed with militarized police.  But when the looting started, they did nothing about it.  In fact, news reports indicate that the police were lined up just blocks from where the looting was happening but did not make any attempt to stop it.

When I first read the news reports that I am about to share with you, I could hardly believe them.  I had to read them more than once just to be sure that I was understanding what I was reading.  According to eyewitnesses, police vehicles were seen driving by some of the stores while they were being looted and they did not respond.

If the police are not even going to lift a finger to stop rampant theft, then what in the world are they there for?  Why don’t they just pack up and leave the streets completely?  If they are just there to confront protesters and arrest journalists, all they are accomplishing is inflaming the situation.  And is this what we can expect when civil unrest spreads to more cities throughout America?  Will we not be able to depend on the police to protect our homes and our businesses?

What I am about to share with you are excerpts from mainstream news reports about how the police did nothing to stop the looting.  To me, this stand down by the police is one of the most disturbing aspects of the Ferguson riots so far.

This first excerpt is from USA Today…

During the night, buildings burned, windows shattered, and chaos ensued as protesters stood in the street criticizing police. Officers threatened to arrest protesters who came near their trucks. Yet authorities did not attempt to stop any looting as citizens moved to protect local businesses from sporadic thefts.

This next excerpt is from the local Fox affiliate in St. Louis…

Protesters believe the media has started to confuse the difference between themselves and the looters. Fights have begun on the streets as well as social media with some believing this has become similar to a game of chess.

And this last excerpt is from Fox News…

A reporter from the station tweeted that police cars were seen driving past some of the stores being looted and did not respond. It rained in Ferguson Friday night and protesters could be seen outside until 6 a.m.

Two store owners, standing outside their business holding guns, told Fox2Now.com that when they called 911, they were sent from one police agency to another, and got no response.

One of the owners, with a large black gun resting on his shoulder, told the station that police were lined up blocks from the looting, and did not engage looters making off with large boxes from these stores.

“There’s no police,” he said. “We trusted the police to keep it peaceful; they didn’t do their job.”

Why did the police in Ferguson refuse to do their jobs?

Who told them to stand down?

Someone in the mainstream media needs to start asking some of these hard questions.

As the streets of Ferguson have descended into anarchy, business owners have been forced to take matters into their own hands. 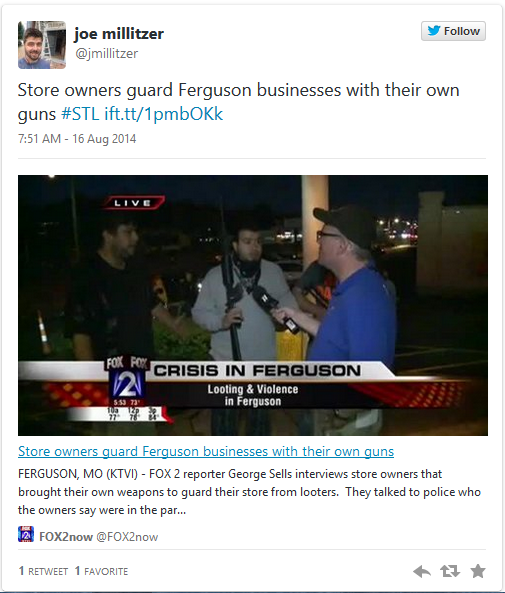 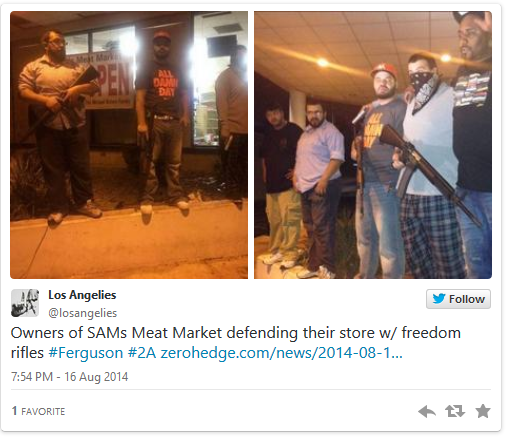 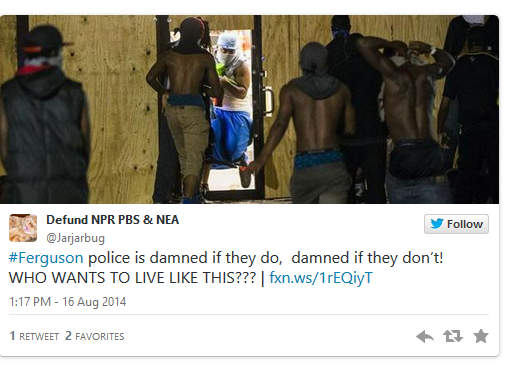 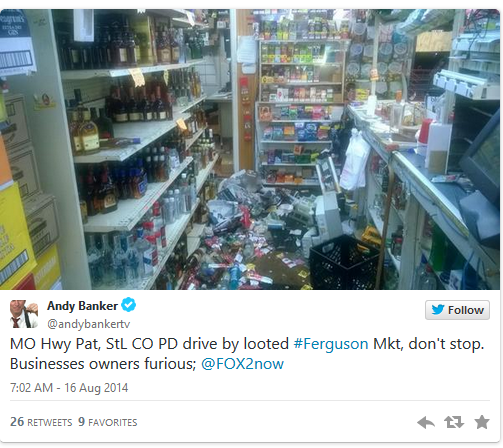 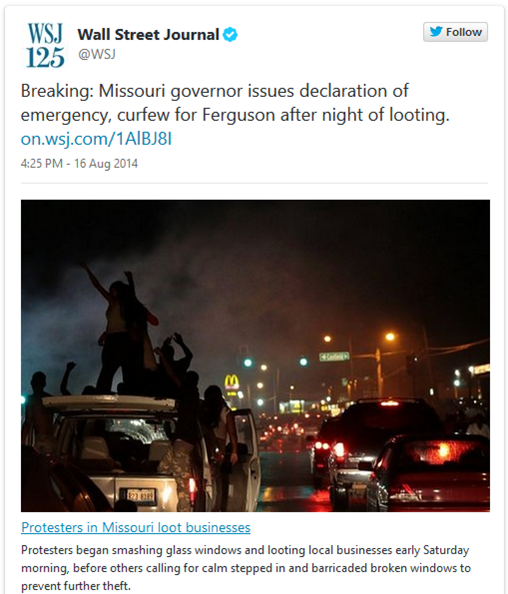 The following are of a Wal-Mart in Ferguson that were posted by the Economic Policy Journal.  In this first photo, you can see that Wal-Mart employees have stacked rows of shopping carts across the front entrance in order to keep looters from getting in… 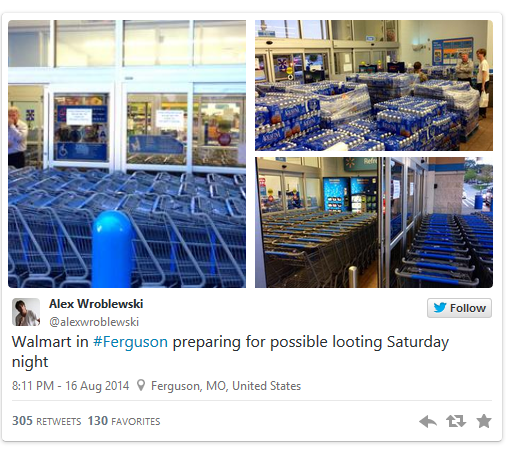 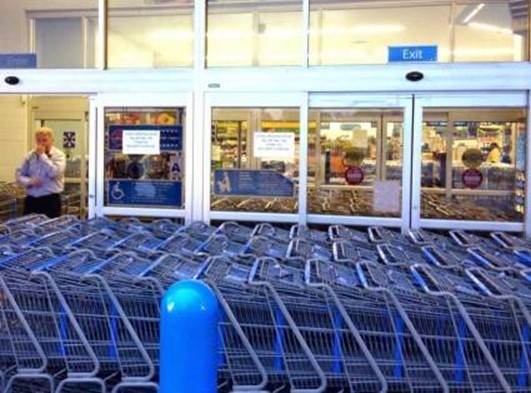 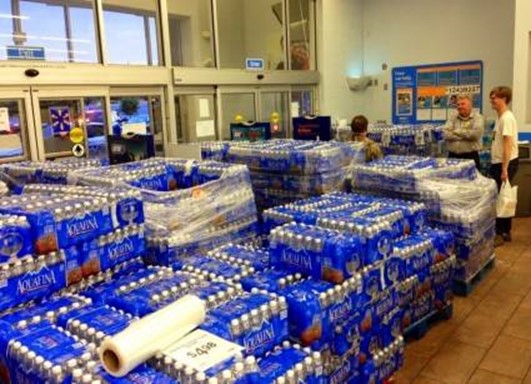 Other business owners are taking even stronger measures to protect their property.

Every night now, business owners can be seen all around Ferguson standing out in front of their businesses holding guns.  You can see some examples of this in this article.

And unsurprisingly, gun sales are going through the roof in Ferguson at the moment…

Guns and ammo are selling at a feverish pace in and around St. Louis as violent clashes continue between protesters and police in nearby Ferguson, Missouri.

“People are coming in with fear in their eyes and they’re saying they need something to protect their house,” said Steven King, owner of Metro Shooting Supplies, a gun shop in the St. Louis suburb of Bridgeton. “They’re scared to death.”

As I have written about previously, I believe that what is going on in Ferguson is a perfect example of how rapidly the streets of America can descend into chaos.

And I also believe that what we are watching is just a preview of what is coming to America in the years ahead.

Watch what is happening very carefully, because there is a lesson in all of this.

When chaos reigns, the police are not going to be there to rescue you.

In a crisis situation, you and your family are not going to be a priority for the authorities.  So you are going to need to come up with your own plan to ensure the safety of yourself and your loved ones.

If you think that I am being overly dramatic, you must not have been paying attention to what has been going on in America in recent years.

Today, our society is becoming increasingly divided.  A whole host of opinion polls and surveys show that anger and frustration in this country have reached all-time highs.  The civil unrest in Ferguson didn’t just come out of a vacuum.  The truth is that pressure has been building under the surface in the U.S. for years.  And it isn’t going to take much for more Fergusons to erupt all around the nation.

So what do you think?

Why were the police in Ferguson told not to stop the rampant looting on Friday night?

And what do you think is coming next for America?