This week AT&T U-Verse customers in Atlanta, Dallas, Michigan and Austin, Texas woke to find their TVs had been taken over by the Presidential Emergency Alert System. The message, claiming to be an emergency alert issued by The White House, alerted viewers that their programming was being re-directed or “force tuned” to another channel.

The strange thing about the alert, which is part of the EAN or Emergency Alert Notification system, is the only person who has the ability to activate this alert system is President – and only in times of emergency.

Video of the Emergency Alert as it Happened: 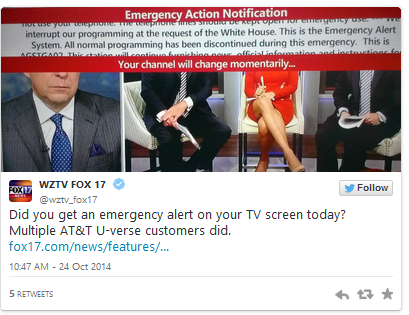 AT&T put out a statement saying: “Earlier today U-verse TV customers may have received an Emergency Alert notification. We have confirmed that there is no emergency at this time and we are investigating why this occurred. We apologize for any inconvenience.”

Back in 2011 the Obama administration completely overhauled the nation’s emergency response system, giving the president the ability to instantly take over the entire broadcast system with the flip of a switch. In case of national emergencies, the new system allows the president to take over television airways, radio signals, and even the internet and your cell phone. Today’s mystery takeover of the EAS system raises some very troubling questions, and shows how easily the whole system can be forcibly taken over.

The White House has yet to comment on the situation, or even acknowledge what happened.