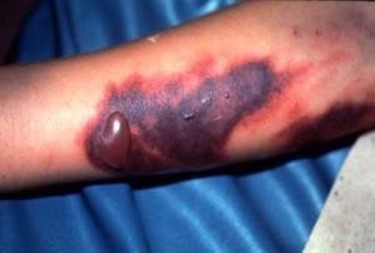 Hemorrhage Under the Skin in Ebola Patient

When I first wrote about Ebola early this year, I was hoping that it wouldn’t be a news item 6 months later. In my March 2014 article, I mentioned my concern about 86 cases and 59 deaths reported in the country of Guinea. The article you’re reading now counts more than 8000 cases and 4000 deaths in several countries. Dire projections by some experts predict more than a million cases by January.

The biggest headlines have gone to a man named Thomas Eric Duncan, who was admitted with Ebola after arriving in Texas. Although he came into this country by false pretenses, I, of course, hoped that Mr. Duncan would survive. I wanted to believe that our system of disease control was so strong that we could overcome any illness if we could just put our high technology and resources to work.

I was wrong. Mr. Duncan succumbed to the disease Oct. 7. Would he have survived if he were admitted to the hospital when he first presented, instead of being sent home due to a failure in the chain of communication? Possibly, but mistakes happen. Could our medical system trump both infectious disease and human error? In the case of Thomas Eric Duncan, apparently not. And now, it appears that it has failed again.

One of the health care workers assigned to Mr. Duncan’s case has contracted the disease. This person worked with the patient in full protective gear. It’s thought that a breach of infectious disease protocol is at fault, which makes it clear that the average hospital may not be able to handle cases of highly contagious illnesses such as Ebola. There are 4 centers in the U.S. that can: Nebraska, Atlanta, Montana, and the NIH. Given the inadequate pandemic training that medical personnel get in your average hospital, these are the only places that victims can go without threatening medical staffs and the community. Sending U.S. Ebola patients for treatment anywhere else is, at this point in the game, foolhardy and, perhaps, criminal.

In other developments this year, Ebola, like many viruses, has shown an ability to mutate. A team of Harvard scientists published a study in the journal SCIENCE in which they claimed to identify 250 different mutations in the Ebola genome. Most of these had little effect on the virus, but even the United Nations is concerned that a future mutation may cause the virus to be airborne.  Airborne transmission is different from transmission by inhalation.  If you inhale blood splatter, particles of vomit, or phlegm cast into the air by an Ebola patient, you can get the virus.  The difference is that the conventional wisdom believes that you can’t get it simply by breathing the air in the same, say, airplane, as an ebola patient.

Before the U.S. cases, I was regularly asked why it should matter to Americans that there is an Ebola epidemic in West Africa. Once Mr. Duncan hit the headlines, it was clear that we have plenty of reason to care. We have to care for humanitarian reasons and we have to care for selfish reasons as well. The U.S. should send as many resources as possible to the affected countries but must consider the protection of its own citizens as well.

Have political considerations regarding “fairness” to West Africa trumped public safety in the eyes of our health officials? We can’t expect our politicians to wage the battle between fairness and public health, but those in power at the CDC shouldn’t shy away from the hard truth: More U.S. Ebola cases mean resources must be spent here that could have gone to West Africa.

It’s been a long and winding road this year on the Ebola front, yet there are multiple fronts in the war on infectious disease:  Enterovirus D68 has invaded 46 states. Mosquito-borne Chikungunya is ravaging the Caribbean and Latin America, with sporadic cases from New York to Texas. Malaria is a long-standing issue in many areas. Yet, most of us aren’t prepared to meet the demands of preventing the spread of contagious illnesses. We depend on our top doctors to protect us.

They won’t. They can’t, truthfully, if the number of infectious cases becomes so numerous that they strain the ability of a nation’s medical system to handle them. It’s happening in West Africa with Ebola right now, and the financial cost of more victims in the U.S. might become astronomical.

As I write this, I’m hearing about immense hurricanes striking India and Japan. For the United States, hurricanes and Ebola have one thing in common: We get warnings that allow us to prepare for them. If our top health officials listen to the warnings about Ebola, we may still avoid becoming its victims. 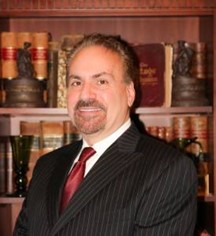 The Definition of Geezer

Are you prepared to deal with an epidemic if it came to your town?  What about other medical issues related to disasters?  Our new Pandemic Preparedness DVD and our #1 Amazon Bestseller The Survival Medicine Handbook
will give you tons of step-by-step information, IN PLAIN ENGLISH, that will help you become a medical asset to your family, even when the ambulance ISN’T heading in your direction.

Got your medical supplies in order in case of disaster?  Check out our entire line of medical kits:  MEDICAL SUPPLIES