In a story that’s being totally ignored by the mainstream media, another rancher is being targeted by the federal government in a land dispute that seems eerily similar to the Bundy Ranch Dispute in Nevada.

Rancher Kit Laney, and a number of New Mexico Ranchers are all locked in a vicious battle with the federal government over land that the Feds are now claiming ownership of – even though the Laney family has claims to the land going all the way back to 1883.

Earlier this year the Federal Government closed down access to the Ranchers land, placing gates that blocked his cattle’s access to a creek in the Lincoln National Forest. About 20 local ranchers were also affected, all of whom have watering rights to the creek and have been using the land for decades.

Just like during the Bundy Ranch situation, the government is yet again using some asinine environmental reasoning to justify stealing more private land, claiming the area’s ranchers are endangering habitat for the New Mexico meadow jumping mouse by allowing their cattle to graze on the land. 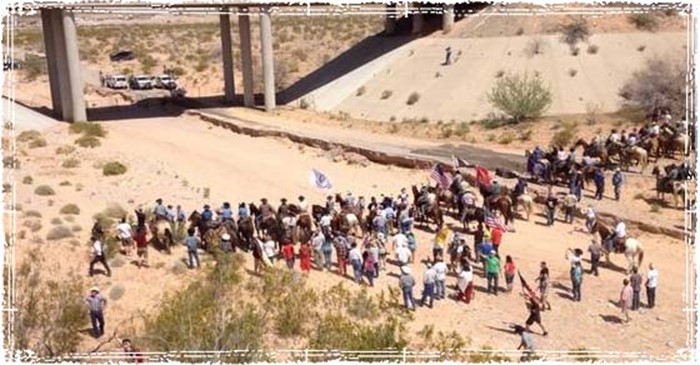 Unlike the Bundy Ranch story that we reported on out in Nevada, where state and local officials failed to help the rancher, this time local officials in Otero County, New Mexico aren’t rolling over.

On Monday, a New Mexico county board instructed the local sheriff to remove all BLM gates from the land. The Otero County Commission voted 2-0, with one commissioner absent, to “immediately take steps to remove or open gates that are unlawfully denying citizens access to their private property rights.”

Commissioner Ronny Rardin said Monday he was uncomfortable with taking action “against people that are my friends,” apparently referring to local Forest Service rangers, but that he had an obligation as an elected commissioner to uphold the Constitution.

“That Constitution is in breach right now and it is our duty, it’s our civil duty — if we want to keep our nation free and keep our country as it was intended to be by our forefathers — to stand up and take this type of action,” said Mr. Rardin.