I was sitting on one of those perfect early autumn nights with not a sound except loons calling and the occasional owl hoot. We could see, it seemed the entirety of the heavens, arrayed in a tapestry of light, like diamonds spilled on a piece of black velvet cloth.

Not being able to pass up a chance to prove myself smarter than my know-it-all teenager, I said, “pop quiz: which way is North?” Looked up at the stars, then pointed in some random direction. “That way.”

“Because that’s the North Star.” “It’s the brightest star in the sky.” Right into my trap. Smug parenthood achieved. 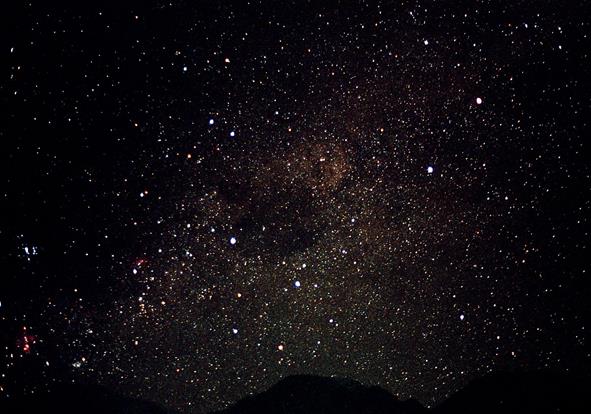 “Which one was it again?”

Being able to find Polaris, the pole star (star directly above the North pole) for the Northern Hemisphere, is quite easy with a touch of knowledge in easy-to-recognize constellations. The North Star is accurate to True North within a variance of less than one degree, so it is a stellar (pun intended) way of being able to get your bearings if you are lost in the woods without a compass at night. However, it is, as very commonly misunderstood, NOT the brightest star in the sky; in fact, it is approximately the 50th brightest, depending upon conditions. However, it is bright enough to spot under most bright city or moonlit conditions. So, how do you find it? 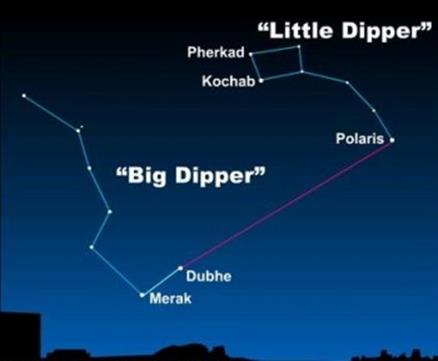 The Big Dipper, once found in the sky (visible in all seasons in the Northern Hemisphere) points the way to Polaris with the two outermost stars in the “cup” portion of the constellation (Merak and Dubhe). Line them up, and use them to shoot an imaginary line, five times the length of the distance between Merak and Dubhe, ABOVE the dipper. The first star you will come to is our buddy, Polaris, the North Star. A way to check that you have the right star is that Polaris is the furthest-out star in the “handle” portion of the Little Dipper (or Ursa Minor if ya wanna be technical-like.). The North Star, due to atmospheric refraction, is able to be seen even if you are a touch below the equator.

Now that you’ve found The North Star, find a way to mark the direction from your current location so you can move during daylight. (moving during the night should probably be held off on under most circumstances, whether you know which was North is or not!) If you’re not in an emergency situation, you can use your newfound knowledge to wow friends, pick up chicks, or to humble less-than-modest teenagers. Who knew the stars were such fun?