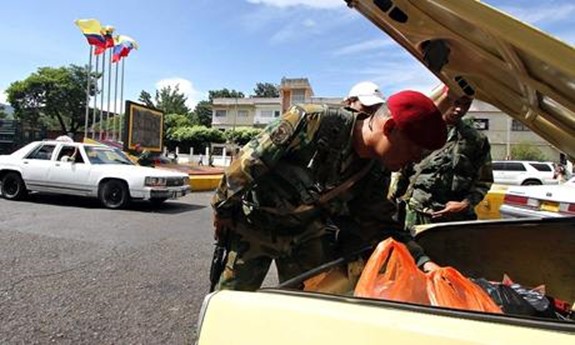 The food shortage in Venezuela is so bad the country is mandating that people scan their fingerprints at grocery stores in order to keep people from buying too much of a single item. I have written several times before about shortages of food in Venezuela, and how people were being marked and tattooed in their hands to stop people from buying more than permitted.

Several people see Argentina as a window to the future of America. Footage like the Ferguson rioting does little to dispel that claim. While militarily and economically still powerful, American society and standards of living have decayed noticeably in recent years.

While some Americans look at events such as the ones that took place in Argentina as something that may be heading their way, for people in Argentina Venezuela is our window into the authoritarian future ahead of us, so much that the painful term Argenzuela was coined.

What would be worse would be for a future government to do away with cash money and mandate that everyone use a debit or credit card to buy things. Sold as a necessary measure to halt “terrorist money laundering”.

Then, if you are deemed an anti-social element by a secret tribunal, your ability to exist and survive — to buy food, pay rent, buy medicine, gasoline for a car, buy train tickets, etc.
— could be removed with a mouse click on a remote computer at an undisclosed fortified location.

Fortunately I’m not stuck in Venezuela, and I hope we never see such madness in any civilized country, but the fact that fingerprints will be scanned anywhere in the world to buy food sends chills down my spine.