Homeland Stockpiling “Less Lethal Specialty Munitions”- Are They Arming for Riots Across America? 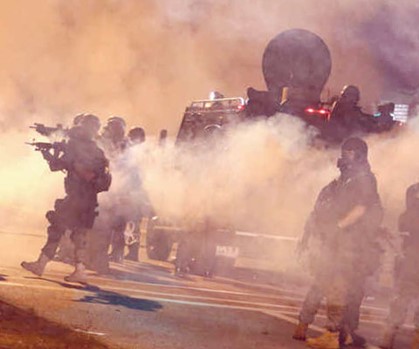 One of the biggest stories for years in the alternative media was the mysterious and foreboding purchase by Homeland Security of more than 1.6 billion rounds of ammunition.

Thanks to coverage on prominent sites like DrudgeReport, the story reached into mainstream media, prompting official spin and downplaying of the purchase.

Now, a new Homeland Security purchase order listed on FedBizOpps  also raises an eyebrow or two, given the heated and divided political and social climate at hand. Just look at what happened in Ferguson…

A request for “less lethal specialty munitions” for use by Homeland Security dated March 23, 2015 reads:

U.S. Customs and Border Protection (CBP) intends to solicit responses to Request for Information (RFI) 20082225-JTC for Less Lethal Specialty Munitions (LLSM) for use by the Department of Homeland Security (DHS). CBP is interested in incorporating commercial and industry practices that support this type of procurement. To accomplish this, CBP intends to make industry a partner in all facets of the acquisition process, specifically by considering existing market capabilities, strengths and weaknesses for the acquisition of this commodity. 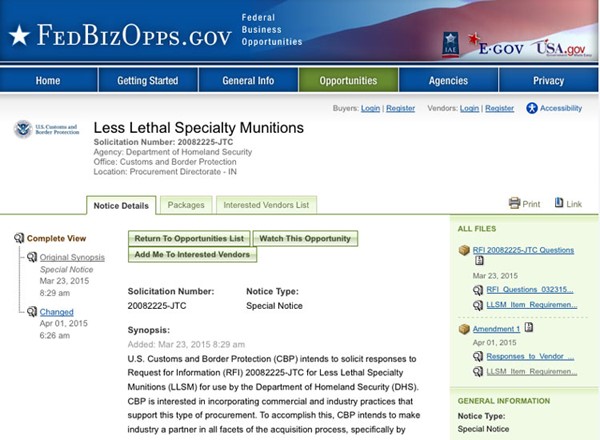 Over the course of 9 pages (PDF), the technical requirements call for an arsenal of specialized weaponry for training and deployment against crowds.

On top of a wide range of gas and chemical grenades, rubber bullets and other riot rounds, the purchase calls for “controlled noise and light distraction devices,” including flash bangs which set off a 175 dB sound with 6 – 8 million candelas light bursts in 10 milliseconds.

So why are the Feds prepping to take on crowds?

Officially, the request is put through Customs and Border Patrol, a subset of the Department of Homeland Security, but it is unlikely that the equipment will be used to protect the border and keep out illegal aliens. But the riot gear and crowd control devices have many potential uses.

Perhaps, the equipment for use in instances like last year, when protesters in Murrieta confronted Customs and Border Patrol agents and blocked buses carrying a wave of illegal immigrants from Central America?

The ferret rounds are designed to penetrate barriers and deliver debilitating or disrupting chemicals:

“The projectile shall be designed to penetrate barriers of glass, particle board, and interior walls. Upon impact of the barrier, the nose cone will rupture and instantaneously deliver the OC liquid on the other side of the barrier. ”

The collection of equipment provides a diverse range of toys with which authorities could push back crowds and potentially intimidate free speech as well.

Are there more riots coming? Is widespread civil unrest only a matter of time? Is it related to martial law exercises like Jade Helm 15?

What do the Feds know that we don’t?

They are getting ready… are you?