“If A Space Super Storm Like The 2012 Storm Hits Earth We Will Be Picking Up The Pieces For Years”: NASA Warns

A new video from NASA’s science division highlights the fact that earth is one X-Class solar flare away from a situation that would completely alter life on earth as we know it today.

Such events have played out at various times in our history, with the most notable recent examples occurring in 1859 and 1989.

The 1859 ‘Carrington Event’ was so powerful that newspapers of the time reported communication lines showed visible surges and telegraph offices literally went up in flames.

The Great Geomagnetic Storm of 1989 was responsible for taking down Hydro-Québec’s electricity transmission system and reached as far down as Salem, Massachusetts. Pictured below is what one of the transformers looked like after the storm hit. What’s scary about the following image is that it was taken at the Salem Nuclear Powerplant and shows just how susceptible even our most protected facilities are to solar storms. 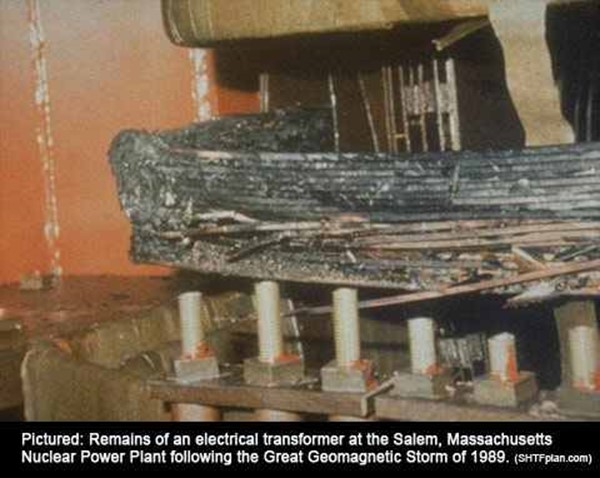 Solar storms are nothing new and scientists watch them via early warning satellites systems on an hourly basis. But even if a large solar discharge was identified, there’s not a whole lot we can do except brace for impact.

As we’ve reported previously, we came close, very close in the summer of 2012. Had the sun’s rotation been just a week ahead of where it was at the time there’s a strong chance you wouldn’t be reading this information. That’s because the flare was so powerful it would likely have fried the entire global electricity grid according to the NASA report below:

They [researchers] have concluded this was one of the strongest in recorded history. “If it had hit earth we would still be picking up the pieces,” says Daniel Baker of the University of Colorado.

This storm might have been stronger than the Carrington Event itself.

A similar storm today could have a catastrophic effect on modern power grids and telecommunication networks.

Multi-ton transformers fried by such a storm could take years to repair and impact national security.

Video via The Daily Sheeple:

Though our dependence on electricity is often taken for granted, the fact is that a downing of the grid would lead to serious and immediate repercussions across the globe. Without it transportation would come to a standstill, gas pumps wouldn’t work, cellular phone service would be inoperable, and any job requiring the use of a computer or an electrical outlet would be instantly made irrelevant.

It would be a technological disaster of unprecedented proportions. So much so that the Center for Security Policy estimates 90% of Americans would be dead within a year.

Former Congressman Roscoe Bartlett noted in the documentary Urban Danger that the problems are within the outdated national power grid. There are scores of transformers required to switch electricity from one place to another. Should those go down simultaneously there simply aren’t enough backup transformers available to repair those damaged by the storm and since we source this equipment from foreign countries like China it could be anywhere from 18 months to four years before the grid would start being restored.

There are a number of events that could create a situation in the cities where civil unrest would be a very high probability. And, I think that those who can, and those who understand, need to take advantage of the opportunity when these winds of strife are not blowing to move their families out of the city.

But is this just fear mongering or is there something to it?

How likely is it that we could be hit by a solar flare powerful enough to take down our grid?

Coronal Mass Ejections and Solar Events happen on a daily basis. Most of them are benign and don’t rate high enough on the scale to affect anything except maybe radio communications. This year we’ve already experienced scores of the medium sized “M-Class” flares, as well as various low end “X-class” flares.

But the 1959, 1989 and 2012 events aren’t out of the ordinary either. In fact, in 2003 the sun delivered what researches call a “whopper.” A flare that, had it been facing earth, would have caused some serious damage, certainly on the order of the 2012 event.

Researchers from the University of Otago used radio wave-based measurements of the x-rays’ effects on the Earth’s upper atmosphere torevise the flare’s size from a merely huge X28 to a “whopping” X45, say researchers Neil Thomson, Craig Rodger, and Richard Dowden. X-class flares are major events that can trigger radio blackouts around the world and long-lasting radiation storms in the upper atmosphere that can damage or destroy satellites. The biggest previous solar flares on record were rated X20, on 2 April 2001 and 16 August 1989.

Congresswoman Yvette Clarke (D-NY), a senior member of the House Homeland Security Committee recently suggested that the chance of a serious solar event on our planet is a certainty.

“The Likelihood of a severe geo-magnetic event capable of crippling our electric grid is 100%.”

Though the stars (and earth) would need to align in order for such an event to take place, history shows that it happens quite regularly in the grand scheme of things.

At the very least we would be facing weeks without power, perhaps on a national level. As depicted in the recent NatGeo documentary American Blackout, it wouldn’t take more than a few days for the entire system to collapse in on itself as grocery stores ran out of food, water utilities were unable to deliver potable water, and emergency response became non existent.

According to Tess Pennington, who provides useful preparedness tips for various emergency disasters scenarios including long-term power outages, the thin veneer of society would become apparent rather quickly.

Should we be struck by a high level X-class flare the effects will be felt within seconds.

If you happen to see a power surge, your cable/satellite TV no longer works and you can’t get your cell phone or car to turn on, then chances are that we’ve either been hit with an electro-magentic pulse weapon or the sun has sent a solar flare our way.

Either way, we’ll be in for a long and arduous recovery period that could span a decade or more.