“Pentagon is Making the Initial Preparations for a Cruise Missile Attack”

Two words for Syrian President Bashar al-Assad: Get Out.

It should be clear based on reports this week of US soldiers and intelligence operatives entering Syrian borders last Saturday that a military operation is now in progress. After the events that played out in front of the world on Wednesday, when it was claimed that Assad launched a chemical attack against his own people, there is no question as to what was going to happen next.

Defense Secretary Chuck Hagel suggested Friday that the Pentagon was moving naval forces closer to Syria in preparation for a possible decision by President Obama to order military strikes.

And we’re not just positioning boats. Via Zero Hedge:

Moments ago the inevitable denouement arrived when as CBS’ David Martin reports, the US is preparing for a cruise missile launch against Syria, and is further ordering warships closer to Syria to be prepared and ready for when the trigger is pulled. 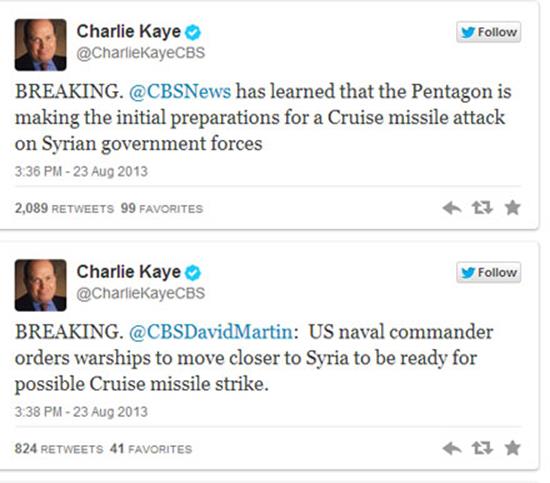 For those who would suggest this is just posturing, there is already a precedent:

In the eyes of the world Bashar al-Assad is now a mass murderer and he’s about to get Saddam’d by Hussein.

It’s a realistic possibility also put forth by survival specialist Joel Skousen in his documentary Strategic Relocation and a warning reiterated by a DHS Insider who claimed in June of 2013 that a World War was about to break out and would lead to the deaths of millions.

This is getting real folks. All signs point to a serious confrontation in our near future.