Guest post by Dave H, a reader of SurvivalCache.com

I read a lot of articles about the best choice of firearms. They generally focus on the AR-15 and the AK47.  I believe the discussions generally miss the point by failing to ask the question of what are you trying to do with the weapon.

For example, if your goal was to stop a vehicle from 800 yards neither the AR-15 nor the AK47 would be an effective choice.  In this case the .50 BMG would be the ammunition of choice and there are numerous weapons to discharge this projectile. My original choice would have been the McMillan TAC-50A.

However, the recent sale of this portion of the McMillan Group places this on hold.  I hope they don’t disappear like CheyTac.  The Barrett M107A1 certainly plays well in this arena as do many of the other Barrett rifles. Other folks make .50BMG rifles like Armalite. They don’t all cost $12,000, like the McMillan, and can be quite effective in stopping a vehicle at long distance.

Let’s say your next objective was to take out individuals from a mile away. 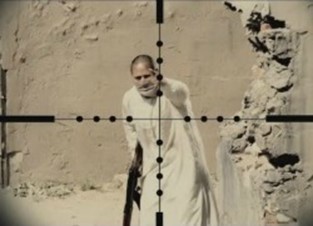 In my humble opinion I believe that taking a mile shot is a waste of ammunition.  There are too many variables that limit the viability of the shot.  The first variable is the shooter.  The average person does not have the resources to train and practice at these distances.  The second variable is the rifle.  Even a sub-MOA rifle could be off feet at this distance.  Ammunition also creates variability.  What do variations of a 10th of a grain of powder do at these distances?  Variations in crimping and any defect on the bullet surface will alter the trajectory of the projectile.  Try and adjust your shot placement for uphill or downhill and then throw in the environmental variables such as temperature, humidity and wind and you will find the shot to be a guess at best.  If you are not convinced then consider the .50BMG discussed above or a round like the .338 Lapua Magnum.  Players in this market space include the above mentioned McMillan with the TAC 338, the Barrett Model 98B, the Accuracy International AXMC and the Savage 110 BA.

What about a threat from 200 – 500 yards?  During SHTF, your goal at this level should be to identify and eliminate the command and communication staff.  It should also be to eliminate as much of the threat before you are in their range.  I believe this is an area where most shooters can be effective with a modern large bore hunting rifle.  The market place is filled with tremendous rifles and ammunition.  Browning, Remington, Ruger, Savage, Sako, Weatherby and Winchester are all large players in this market.  The rifles are affordable to the working person and they are extremely accurate.

There are excellent optics available for reasonable costs. Bushnell, Burris, Leupold,Nikon, Vortex, Zeiss and many others service this market.  The scope options are exceptional and include built in laser range finders, bullet drop compensators, illuminated reticles, windage markers and parallax adjustments that can be used as a poor man’s range finder.  Inexpensive laser range finders are also available.  Many of the range finders have a bullet drop compensator that adjust for your bullet group and compensate for changes in angle.  Ammunition has also improved with the introduction of polymer tipped bullets.  The consistency, accuracy and energy are all improved over the past decade. Ballistic charts and calculators are readily available.  Winchester has an interactive ballistic calculator on their website where you can simulate different conditions.  Winchester also has an app for an iPhone. Let’s go back to the threat.  Imagine a group of individuals with reasonable shooting skills confronted with individuals carrying contemporary battle rifles.  They may not be able to stop a battalion, but they can certainly make it hot for smaller groups. 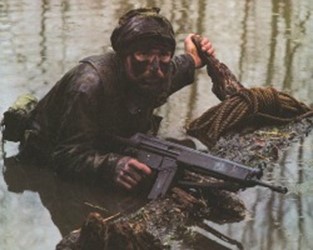 Let’s move the threat from 100 – 300 yards.  In this zone during SHTF, a rapid rate of fire with knock down power would be desired.  This is an area where the AR-10/HK91 battle rifle platform shines.  It has large bullets with excellent knock down power, reasonable accuracy, managed recoil, high capacity magazines and high rates of fire.  PWS, Accuracy International, Armalite, LWRC, POF, Bushmaster, Colt, DPMS, Heckler and Koch, Ruger, Sig Sauer, Smith and Wesson are all makers of weapons in this class.  Imagine the damage a group of reasonably trained individuals could inflict in this zone with these weapons.

Move the threat closer into the zone from 25 – 150 yards and the amount of lead going down range becomes critical.  Your threat is near and reloading becomes an issue.  Accuracy, while always important, becomes the second most important issue of the day.  A rifle that can shoot a 3″ group at 100 yards is just as effective as one that shoots sub-MOA.  This is the zone for the AR-15, Mini-14 and AK47.  Short carbine rifles with high rates of fire, minimal recoil are required to repel the threat. There are an incredible number of manufacturers in this market place and even a larger number of accessories.  Quality, accuracy and price vary dramatically.  Choose wisely.

When we look at close quarters combat one would lean towards the AR-15 platform. However the standard AR-15 may not be the optimal choice. Before you make that final decision consider coming around a corner and you have to swing a 16″ or 18″ barrel. Compare that to a 7″ or 10″ barrel.  That fraction of a second may be the difference of life and death.  So if your threat is in this zone consider an AR-15 with a short barrel.  Technically these weapons are considered pistols rather than rifles.  You may want to add a Sig Sauer Stabilizing Brace to your pistol. 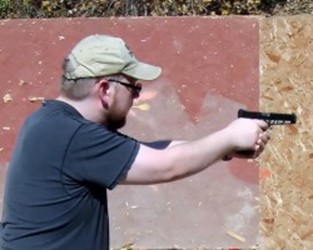 Let’s look at other situations. Assume for a moment that you are guarding a checkpoint into your neighborhood.  You may be in a situation where you need to stop a vehicle at close range.  Consider a shotgun with steel slugs like the DDupleks. They come in 1oz and 1 1/8oz sizes.  They are encased in polymer and are safe to shoot in any choke. Imagine a flat faced steel slug traveling at 1400fps.  Put this in a Saiga shotgun with a 20 round magazine and you are a very formidable opponent to anyone at close range.

What about handguns?  They certainly have their place.  My personal favorite is the 1911 .45acp. But that is just me. When I am asked what handgun someone should buy I generally answer with the one you shoot well.  I know this may sound like a cop-out but it’s true.  For me a 1911 fits my hand perfectly.  I also have a CZ75 that I shoot very well. Then I have an S&W .9mm.  It is a nice little handgun.  It just does not fit me and I struggle with accuracy.  Then there is recoil.  It is better to have a handgun where you can manage the recoil.  Trying to teach someone to shoot a handgun with a .454 Casull would fail because they would develop bad habits from the excessive recoil.  So pick a handgun that you can manage.  Back to the value of handguns, they are easily carried; the variety allows for individual selection, are generally reasonably priced.  They are also excellent in close quarters situations.

How about carbines chambered for handgun calibers?  This class of firearm is pretty interesting.  One manufacturer Hi Point makes a .45ACP, .40S&W and a .9mm.  These firearms are inexpensive and I wouldn’t classify them as a good gun. I would classify them as a good enough gun.  These guns are inexpensive to buy, inexpensive to shoot and pretty effective at close range.  Think of the damage a 230 grain .45ACP bullet will do a 75 yards.  This is a good choice for those on a limited budget where they want to minimize the calibers of ammunition.

What about a .22 or an air rifle?  I realize that many people have been killed with a .22. Unfortunately, they lack the immediate knock down power of other calibers.  The .22 and the air rifle may not be the best for defense. That doesn’t mean they don’t have value. They are inexpensive to shoot and therefore are excellent for training.  They are also excellent for survival. An air rifle can kill small game without compromising your position.

To summarize, what weapon should someone buy? Ideally, everyone would have the resources to own and train on several in each category.  However, that is about as realistic as winning the lottery.  I think of defense in zones.  Think about the zones you need to defend.  If you live in an urban area you may never need a .50BMG or .338 Lapua Magnum.  In this case, an AR-15 may be perfect.  If you are on a limited budget then a carbine shooting a handgun round and a handgun or a .22lr may be the right choice.  If you live in a rural area where longer range shooting is possible a large bore hunting rifle or an AR10 type platform may be an excellent choice.  However, don’t forget about close quarters.  Eventually all fights get up close and personal.