7/5 – FBI/DHS/NCTC issue bulletin to US law enf urging vigilance due to cont interest by extremists groups in attacking the Homeland. See email for synopsis.

On Monday, subscribers were informed of the release of a new Worldwide Caution from the State Department warning Americans of the continuing threat of terrorism, political violence and and criminal activity that transpire globally.

According to this cautionary note:

Terrorist groups including ISIS, al-Qa’ida, their associates, and those inspired by such organizations, are intent on attacking U.S. citizens wherever they are. Extremists may use conventional or non-conventional weapons to target U.S. government and private interests. Terrorists are increasingly using less sophisticated methods, including the use of edged weapons, pistols, and vehicles as weapons, to effectively target crowds. Extremists are also increasingly aiming to assault “soft” targets, such as:

In multiple regions, terrorists, guerrilla groups, and criminals seek to kidnap U.S. citizens to finance their operations or for political purposes. The US government also remains concerned that terrorists could again seek to down aircraft using concealed explosives or hijack commercial flights.

U.S. government facilities worldwide remain in a heightened state of alert. These facilities may temporarily close or periodically suspend public services to assess their security posture. In those instances, U.S. embassies and consulates will make every effort to provide emergency services to U.S. citizens. U.S. citizens abroad are urged to monitor the local news and maintain contact with the nearest U.S. embassy or consulate.

U.S. citizens are strongly encouraged to maintain a high level of vigilance and practice good situational awareness when traveling abroad.

On Thursday of this week, AlertsUSA subscribers were notified of a new Joint Intelligence Bulletin issued by the FBI, DHS and National Counterterrorism Center (NCTC) reminding law enforcement, military, and security personnel to remain vigilant this summer in light of the continued interest by homegrown violent extremists (HVEs) and domestic extremists in conducting attacks in the Homeland during public and private events.

The FBI, DHS, and NCTC remain concerned that upcoming summer celebrations, events, or other large gatherings could be targeted by homegrown violent extremists (HVEs).

Continued calls by foreign terrorist organizations (FTOs) for attacks on large crowds and civilians, along with examples of successful and disrupted plots of this nature both here and abroad, could inspire similar attacks by HVEs in the Homeland.

Similarly, the FBI and DHS remain concerned about the potential for violence by domestic extremists at large or significant events, both public and private, during the summer of 2018. As with HVEs, most lethal violence perpetrated by domestic extremists in recent years has been conducted by lone offenders, making them a continuous concern.

The document designation of this bulletin is U//FOUO (Unclassified – For Official Use Only). While much of the content is available through open sources, providing links to the full document would be inappropriate due to the potential adverse impact on the conduct of Federal programs, or other programs or operations essential to the national interest.

Thus, in this situation we are providing only a synopsis of the description of the ongoing threat, as well as specific calls for continued vigilance and increased situational awareness.

7/6 – USGOV orders departure of all non-emergency personnel from US Embassy Nicaragua due to growing violence. Emergency services for US citizens still available.

7/5 – UKGOV warning public in Salisbury (SW of London) to avoid picking up discarded objects as a precaution against poisoning by nerve agent Novichok. See email.

6/30 – Hundreds of anti immigration / Trump / “Muslim Ban” protests and rallies scheduled for today across N. America. Caution urged if out and about. See email.

We are NOT part of the government.

In fact, they are our customers!

An Analysis of Vehicle Ramming as a Terrorist Tactic

Download a copy of this Security Perspective HERE (PDF, 2.1 MB)

What Does Trump Want From NATO?

U.S. President Trump has shaken seven decades of American defense policy by criticizing NATO. Trump maintains that the military alliance connecting the U.S., Canada and Europe needs to focus more on fighting terrorism and that most NATO nations fail to pay their “fair share” for the common defense. The U.S. bears the heaviest military costs. Read more here.

When the Arbitral Tribunal at The Hague ruled in July 2016 that China’s claim to most of the South China Sea was illegal under international law, Beijing’s propaganda organs angrily stated that Beijing “will neither acknowledge nor accept” the ruling. Two years later, in the wake of a rising outcry against China’s rapid militarization of the contested maritime region, the Global Times mouthpiece newspaper thundered in June that China will “act tougher” with foreign naval vessels traversing the South China Sea and that its firmer posture “could lead to military conflicts.” Read more here.

Is the dawn of AI and autonomous weapons resulting in a new revolution in military affairs? That’s the question posed by a recent article by Frank Hoffman. As with previous such revolutions, technology is not the sole determinant of large shifts in the way military organizations successfully conduct operations. Development of new organizations and new warfighting concepts also play a large role — and these are the domain of humans, not machines. Therefore, if military organizations are to successfully adapt to this new era, they must maximize their human potential to gain an intellectual edge. To sustain and build this edge, leaders will need to rethink professional military education systems and learn how to best combine human and AI. Read more here.

Lopez Obrador and the Future of Mexican Democracy

Andres Manuel Lopez Obrador, best known by his initials, AMLO, won Mexico’s presidential election decisively. A big question now is what López Obrador will do. His campaign revealed a multitude of voices and positions, with his surrogates often contradicting both the candidate and themselves. But even more important for Mexico’s future will be how he chooses to enact his policies—and whether he will abide by the often frustrating institutional checks and balances within Mexico’s democratic political system. Read more here.

The DoD continues to ignore fundamental facts in its latest narrative. Yet again, the Pentagon underestimates al Qaeda’s strength in Afghanistan while downplaying the group’s ties to the Taliban. The Pentagon claimed that al Qaeda’s “core members are focused on their own survival” and “there is no evidence of strategic ties” between al Qaeda and the Taliban. Except, the Pentagon and the US intelligence community has consistently been wrong about al Qaeda’s strength in Afghanistan, and evidence of strategic ties between the two groups does indeed exist. Read more here.

ARM YOURSELF WITH KNOWLEDGE

This 4-page PDF checklist, compiled by experts from the intelligence, special operations, and foreign service communities, will help you and your family organize and prepare for trips abroad like seasoned professionals. From travel documents and banking, to securing your electronic devices and health considerations, it’s all here. 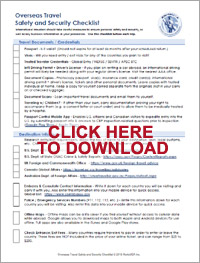 Download your free copy here (PDF, 142 KB) or by clicking the graphic above.

China to Russia: They Will ‘Jointly Deal With Threats and Challenges’
China’s military reforms aimed at offshore expansion
China launches two destroyers with tech similar to US Navy’s Aegis system
China’s Coast Guard Now Under Military Leadership
Japan Sends Helicopter Carrier to South China Sea For a Year-Long Mission
China accuses the US of launching the ‘largest trade war in economic history’
This Is How the U.S. Thinks China Could Invade Taiwan
Pompeo visits North Korea to press Kim on Trump nuclear deal
Pompeo Is Back in North Korea—This Is What He Should Do
Japanese cult leader Shoko Asahara executed for Tokyo sarin attack
China is working on a new fighter for carriers to replace its J-15s
China’s military reforms to ‘WIN A WAR’ and overtake the US revealed in leak
No resolution on abduction issue unless sanctions lifted, DPRK tells Japan
Communist rebels reject Philippine govt’s new demands
Under pressure from US, Japan’s Shinzo Abe ‘cancels Iran trip’
Malaysia suspends multi-billion dollar China-backed deals
New Zealand court rejects Kim Dotcom’s appeal over US extradition