9/10 – Al Qaeda announces the forthcoming release of a “message” on the anniversary of the 9/11/2001 attacks. AlertsUSA monitoring…

The UK’s terrorism threat level has been raised to CRITICAL, the highest of 5 levels indicating a terror attack is “expected imminently,” after London was hit by a new attack targeting commuters headed to work during the Friday morning rush hour.

In this incident, an improvised explosive device (IED) carried in a plastic bucket and outfitted with a crude timer and initiator constructed of small christmas lights partially detonated within a packed commuter rail car at the Parsons Green underground station in West London. 29 were injured in the attack, with many suffering severe burns and broken bones resulting from the crush of panicked commuters fleeing the station. Had the device detonated correctly, forensics investigators believe few of the passengers in the packed train car would have survived as the bomb was packed with nails and the easy-to-make and deadly explosive TATP (triacetone triperoxide) which is used by jihadists everywhere from Europe to the battlefields of Syria and Iraq.

As of the time of this report’s preparation late Friday, the individuals responsible for the attack remained at large. The Islamic State has formally claimed responsibility for the attack through an official announcement made via their Amaq News Agency. That statement was released in multiple languages on various social media platforms. Within the English version, the announcement states that “what is coming is more devastating and bitter.” 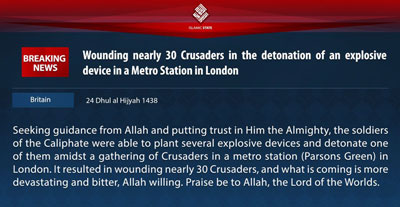 Readers are reminded that exactly four weeks ago, AlertsUSA subscribers were informed of the release of al Qaeda in the Arabian Peninsula’s 17th issue of the online news and fieldcraft magazine known as ‘Inspire’, in which a majority of the publication was devoted to attacking different means of commercial and civilian transportation in the U.S. and Europe, and in particular, trains.

While it is the Islamic State which has claimed responsibility for the attack, there are two interesting data points to keep in mind. The first, are new reports that Hamza Bin Laden, a son of Osama Bin Laden, has been hard at work attempting to unify the efforts of the Islamic State and al Qaeda. The second data point was a 9/11 anniversary messages issued by Al Qaeda in the Arabian Peninsula’s master bomb maker, Ibrahim al-Asiri, within which he vows to continue targeting America for attacks.

Asiri is direcly credited with multiple previous attempted attacks on commercial aircraft, including the failed Christmas 2009 attempt to bring down an airliner near Detroit by underwear bomber Umar Farouk Abdulmutallab, as well as the October 2010 attempt to bring down cargo aircraft using bombs built into printer toner cartridges. While Asiri is most well known by the public in the West for his bomb failures, he is in fact responsible for a host of highly successful attacks using innovative explosive device designs across the Middle East which have claimed hundreds of lives, including his own brother. In this incident, he somehow managed to talk his brother into packing his rectum with explosive material in an attempt to kill a Saudi government official.

9/13 – AlertsUSA is now back up and following the mass shooting incident at Freeman High School in Rockford, WA. 5 shot, 1 dead, shooter in custody.

9/10 – Georgia Gov. Nathan Deal expands emergency declaration to include all 159 counties in the state due to Hurricane Irma. GA residents should tune to local news.

* Threat Info Direct to Your Mobile Device
* Get Away Early, Give Your Family Extra Safety.
* In Wide Use By Gov, 1st Responders, Travelers.
* 24/7/365 Monitoring. No Hype. Just the Bad Stuff.
* Issued Hours and Days before the MSM.
* On your Cell Phone, Tablet or Email.
* We Give The Clear Truth, Unlike the MSM.
* Over a Decade in Operation!

9/14 – Japanese gov stating N. Korean missile has “likely” overflown Hokkaido Island and crashed in the Pacific. Approx half of Japan on alert.

9/10 – DPRK Central News Agency: N. Korea threatens to inflict on the US “the greatest pain and suffering in its entire history” if it pursues more UN sanctions.

On Thursday evening AlertsUSA subscribers were notified via SMS messages to their mobile devices of a new North Korean missile headed eastward from Pyongyang (with an actual launch location of Sunan, just north of of the capital). Overflying Hokkaido Island, the intermediate-range Hwasong-12 missile ultimately fell into the Pacific Ocean 20 minutes after launch approximately ~2200 km (1367 miles) east of east of Cape Erimo. Residents of Northern Japan were advised to seek refuge, and local and bullet train services were immediately halted.

North Korean leader Kim Jong-un has called the country’s missile tests over Japan “a meaningful prelude to containing Guam” and said his country should conduct more missile tests into the Pacific Ocean.

This most recent launch was the longest-ever such flight carried out by the rogue regime, and traveled 3,700km – 800km further than the previous launch over Japan just weeks ago.

President Trump, who has vowed not to let North Korea develop nuclear missiles that can hit the mainland United States, has previously warned on Tuesday that all options are on the table for the United States to respond.

As previously reported by AlertsUSA, when the cloudy historical and political narrative is removed, the world is now faced with the following realities:

Given these realities, restraint and the quest for diplomatic solutions virtually assures continued proliferation into the hands of rogue nations and those private individuals and groups with deep enough pockets.