More than 11 million counterfeit 3M N95 masks have been seized by the Department of Homeland Security in recent weeks, and suspected victims of the scam include hospitals and medical facilities in at least 12 states. Authorities say they have contacted around 6,000 hospitals, clinics, and others who may have accidentally purchased the fake masks, advising them to stop using them and contact DHS immediately.

As many as 1.9 million counterfeit 3M masks were shipped to about 40 hospitals in Washington state alone. Cassie Sauer, the president and chief executive of the Washington State Hospital Association, said that Washington state hospitals bought hundreds of thousands of the fraudulent masks, and the association itself bought 300,000 for its members. Just weeks ago, the Cleveland Clinic issued a statement saying that a portion of its N95 mask supply used by their health system since November were counterfeit and “not effective as respirators.”

According to DHS Secretary Alejandro Mayorkas, one million counterfeit N95 masks were confiscated on Wednesday of this week at a warehouse in Western Maryland. The seizure came as part of a larger investigative effort known as Operation Stolen Promise. Launched in April of last year, the goal of the effort is to protect the Homeland from the increasing and evolving threat posed by COVID-19-related fraud and criminal activity. This includes seizure of shipments of mislabeled, fraudulent, unauthorized or prohibited COVID-19 test kits, treatment kits, homeopathic remedies, purported anti-viral products, as well as all manner of knockoffs and substandard personal protective equipment (PPE). So far, in partnership with border officials, the FDA and FBI, $33 million in phony products have been seized and and more than 230 persons arrested.

The fake masks that were seized this week have the stamp “3M” on them and are shipped in boxes that say “Made in the USA,” although they are not. According to Steve Francis, director of the Intellectual Property Rights Coordination Center, an element of Immigration and Customs Enforcement, the knockoff masks are all produced in China. Quoting Francis;

“They’re extremely dangerous. They’re providing a false sense of security to our first-line responders and to American consumers.”

Officials are urging consumers to be cautions when purchasing N95 masks. Do not confuse them with KN95 masks, which meet standards in China but are not certified by the US National Institute for Occupational Safety and Health. Typical hallmarks of knockoffs include grammatical errors or typos on packaging and user instructions, loose fitting straps, odd smells, poor construction, and lack of a NIOSH seal.

Learn to spot the fakes here and here.

According to data provided by the COVID Tracking Project, all major indicators of COVID-19 transmission in the United States continue to fall rapidly. Weekly new cases have fallen from 1.7 million at the national peak in early January to fewer than 600,000 this week, and cases have declined in every state. As we’ve seen at many points in the pandemic, case numbers are changing most quickly, with hospitalizations and deaths declining after a delay: cases have been falling sharply for five weeks, hospitalizations for four, and deaths for two. In this week’s numbers from nursing homes and other long-term-care facilities, we are now seeing solid declines in deaths correlated with COVID-19 vaccinations of this most vulnerable population.

Despite the declines, the total number of people hospitalized is still very high—hospitalizations have yet to fall far enough to reach even the peaks of the two previous surges, which both rose to roughly 60 thousand hospitalizations.

The Department of Homeland Security has extended the restrictions on non-essential cross-border travel with Canada and Mexico through March 21st.

Effective January 26, the CDC requires all air passengers entering the United States (including U.S. citizens and Legal Permanent Residents) to present a negative COVID-19 test, taken within three calendar days of departure​, or proof of recovery from the virus within the last 90 days.

Air travelers entering Canada will now be forced into mandatory hotel quarantine at their own expense to await results of a COVID test. Trudeau says the new requirement is part of a suite of measures designed to keep Canadians at home, as the government is increasingly concerned about the risk of new COVID variants that appear to be more transmissible and more deadly. 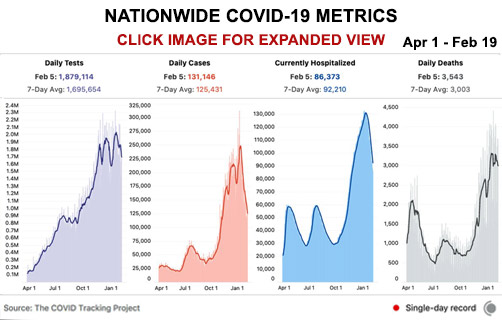 SMS ALERTS FROM THIS WEEK
NOT DETAILED IN THIS NEWSLETTER ISSUE

2/19 – DHS: U.S. land borders with Canada and Mexico will remain closed to non-essential travel until at least March 21 due to continued spread of SARS-CoV-2.

2/17 – At least 7 shot at the SE Pennsylvania Transportation Authority (SEPTA) station in Philadelphia’s Olney neighborhood. One gunman in custody. Monitoring..

* Threat Info Direct to Your Mobile Device
* Get Away Early, Give Your Family Extra Safety.
* In Wide Use By Gov, 1st Responders, Travelers.
* 24/7/365 Monitoring. No Hype. Just the Bad Stuff.
* Issued Hours and Days before the MSM.
* On your Cell Phone, Tablet or Email.
* We Give The Clear Truth, Unlike the MSM.
* 18 Years in Operation!

In the post-9/11 era, first responders have incorporated protecting the Homeland against terrorism into their daily mission. Law enforcement, fire service, and emergency medical services personnel play a vital role in detecting and preventing attacks because of the nature of their work, their frequent interaction with members of the public, and the level of access their jobs provide. People who hold these jobs often can identify behaviors or activities that could signal a pending terrorist attack; therefore, public safety personnel must continue to report, according to the Nationwide Suspicious Activity Reporting Initiative, observations that raise reasonable suspicion.

The Intelligence Community routinely produces information for public safety personnel that may help first responders identify terrorist-related activities and prevent, deter, or respond to terrorist attacks. In light of the December 25, 2020 detonation of a recreational vehicle bomb in downtown Nashville, Tennessee, AlertsUSA provides the following resources from the National Counterterrorism Center to help increase awareness of first responders and members of the general public.

In a move clearly meant to taunt the United States and its allies, China is looking at limiting the export of rare earth elements (REEs) that are crucial to sophisticated weaponry, according to an exclusive report in the Financial Times.

In spite of the Iranian leaders’ claim that their nuclear program is for peaceful purposes, evidence reveals that the Iranian regime has long sought to acquire nuclear weapons.

Despite significant Mexican counter-migration operations on behalf of the new U.S. administration, large numbers of migrants from around the world are still flowing into northern cities and towns along the border from Texas to California, powered by adrenaline from recent Biden moves to open the border wide, according to a CIS survey of Mexican media reporting.

These are the approximate positions of the U.S. Navy’s deployed carrier strike groups and amphibious ready groups throughout the world as of Feb 18, 2021 based on Navy, public data provided by the U.S. Naval Institute, and open source reporting. In cases where a CSG or ARG is conducting disaggregated operations, the chart reflects the location of the capital ship