Raise of Prepper Threat Level to Def Con 2, or.. Prep-CON 2

Private Intelligence Officers working 24/7 with www.AlertsUSA.com during this emergency who are members of The Association of Former Intelligence Officers (www.AFIO.com)  tell us that North Korea (NK) WILL NOT Nuke the USA directly, but they DO have the ability.  Rather, the 600 pound miniature nuclear device is more likely to get sold for hard currency.  Even Gold.  At an estimated price of 200-300 million US Dollars.  This is even worse for the USA than the missile threat. 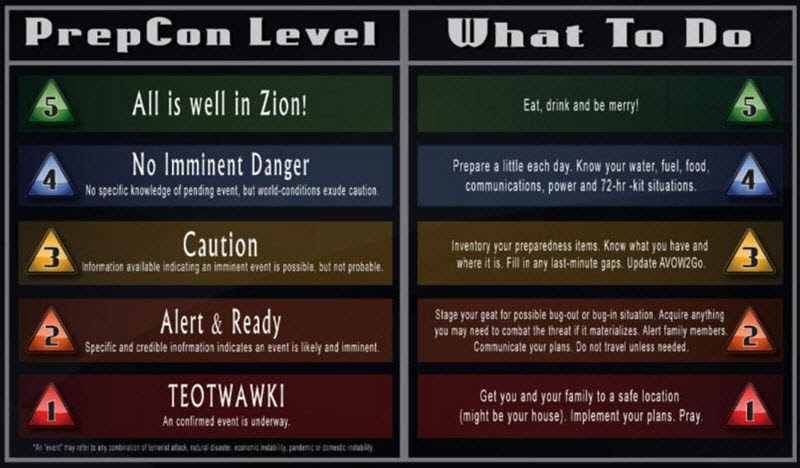 North Korea has a HUGE weapons market that specializes in small arms, ammo, grenades, recoilless rifles then they jump right up to short range, intermediate range and long range missiles.  Even missiles that go into space and can orbit the globe for years only waiting for the signal to re-enter the atmosphere and nuke a city.

NK is a master at smuggling items in and out of the country and around the world.  Its been confirmed that ISIS, Al Qaeda and Iran are all players wanting to buy a nuclear device.  Such a device would be taken by something as simple as a heavy duty pickup truck into down town DC or NYC or Atlanta or Dallas or Las Vegas or Silicon Valley or LA… and detonated.

Since it will be a ground detonation it will create a heavy fallout.  Air burst nuclear devices whose fireball never touches the ground have a very small amount of fallout but they have double of the over pressure and air blast destruction.  600mph winds are literally true with a nuclear detonation

ONE nuclear device detonated ANYWHERE in the world will put the people of the planet into a panic.  Grocery stores will sell out of food and water in 1/2 a day, everywhere in the world.  Because people will think because it happened ‘there’ it can happen ‘here.’  Its the “We’re Next” attitude.

Read BELOW on How to Power Your House From Your Car. If you don’t have it when it strikes you are NOT going to get it. So if you are in the USA, its time to get prepared.  What do you do first?  That’s easy, read below.  Yes, we CAN switch off the internet to North Korea, but they already have hacker teams deployed covertly in China, Hong Kong, Japan, South Korea and Europe and even inside the USA.  They’ve been planning this for a decade.  Sleeper cells. They are ready. You probably are not.  I am.  Get READY, Get the SUPER COMBOs on the bottom of http://www.Energy1234.com 25% OFF with Coupon Code: NK25 for 3 Days or for as long as the net is up.

Get the Emergency Home Power Class Video to SEE ME show you how to power your house from your car, and  GET 25% OFF ANY and ALL of the 4 Videos with the Coupon Code: NK25 for 3 Days ONLY. Wed, Thus and Fri ONLY.  Get a 3 Hour DIY Prep Video as cheap as $11.21 w/ the coupon code.   Videos are at http://www.Energy1234.com SCROLL all the way to the BOTTOM of this LONG page to see my SUPER COMBOs that will really save you money and time.  Get all 4 Videos, plus a secret bonus one that I don’t mention.

THE PREP- POWER YOUR HOUSE FROM YOUR CAR
In my Free Class on How to Power Your House from Your Car I will SHOW you how to do this in about 5 minutes with a $20 inverter.  I cover what you want and can power in your house and for how long etc…   If you get a BIGGER inverter (800+ Watts) and you leave your car at IDLE then you can power your Refrigerator and Freezer, but you only need to do that for about an hour or two a day.  Who else ever told you this?  PLUS… I have a class on How To Keep Your Refrigerator and Freezer COLD WITH and WITHOUT a Generator.  There are MANY things you can do NOW to keep those cold WITHOUT electricity.  Such simple stuff.  Look for the class (in RED above) with those titles at http://www.Steven1234.com Get 25% off my Video Class of How to Power Your House From Your Car.  Use the coupon code: NK25 and you can get a 3 Hour HOW TO Video for as cheap as $11.21 Delivered to you INSTANTLY in HD Quality.  Save more when you get all 4 videos in the COMBO DEAL at the bottom of the page.

p.s.  Since you read all the way to the bottom, you can get 33% instead of 25% off ANY of my battery bank classes or other educational material at http://www.Energy1234.com until 11:59PM Tuesday EST with the coupon code SECRET33.  That makes the 2 Hour Emergency Home Power Class (How to Power Your House From Your Car, and MUCH MORE) ONLY $16.22.  Delivered instantly in HD Video.  Jump on this bargain, I only have these sales during storms.