On eight occasions this week AlertsUSA subscribers were notified via SMS messages to their mobile devices regarding safety and security matters. Most important for this report, on Tuesday, AlertsUSA subscribers were informed of a warning issued by President Trump during his State of the Union address within which he branded North Korea’s leadership as “depraved” and stated that Pyongyang’s pursuit of nuclear missiles could “very soon threaten our homeland.” The President vowed a continued campaign to prevent that from happening.

While most mainstream news coverage of N. Korea over the last few weeks has revolved around the hermit kingdom sending a limited number of athletes (along with hundreds of cheerleaders) to the upcoming Winter Olympics in S. Korea, behind the scenes, tensions are increasing as their nuclear and missile programs continue to advance.

According to the U.S. Nuclear Posture Review (NPR) published late this week by the Department of Defense:

Note the head-on conflict between the two emboldened statements above. As consecutive N. Korean regimes have literally destroyed their country (and caused significant pain and hardship for their citizens) in the pursuit of a strategic weapons capability, it is inconceivable that they would, under any circumstances, voluntarily give up these weapons now that the baseline goal has been achieved. Similarly, S. Korea, the U.S., Japan and other nations repeatedly threatened by N. Korea are equally unlikely to tolerate a nuclear-armed N. Korea for much longer. The risk is perceived as much too great.

The NPR document goes on::

“Our deterrence strategy for North Korea makes clear that any North Korean nuclear attack against the United States or its allies and partners is unacceptable and will result in the end of that regime. There is no scenario in which the Kim (Jong-un) regime could employ nuclear weapons and survive.”

Of equal importance is the threat of the proliferation of these weapons. The fact stands that N. Korea is financially in ruins and their situation is growing increasingly dire by the day. Their major benefactors are gone, numerous rounds of United Nations sanctions have reduced incoming revenue streams to a trickle, and the country is desperate for cold hard cash.

In this regard, the NPR also highlights the risk of North Korea selling its nuclear weapons and technology to other state and non-state actors, in turn increasing the pressure on still other nations to build their own nuclear arsenal in order to defend themselves from a nuclear attack.

One glaring example would be Iran, a very close ally of N. Korea. If Tehran were to acquire nuclear weapons, Saudi Arabia (a historic enemy of Iran) would acquire their own, as would most other Gulf nations.

North Korea already has a troubling history of selling advanced military technology, including that used in nuclear weapons, to Asian and Middle Eastern countries. In the 1990s, North Korean scientists taught Pakistan how to make Krytrons (cold-cathode gas-filled tubes used in nuclear triggers), as well as provided them with low-enriched uranium hexafluoride (UF6) which was then transferred to Libya. It is widely believed that North Korea provided Iran with nuclear technology. Pyongyang also helped Syria build a nuclear reactor (which was destroyed by Israel in 2007).

Then there are the numerous terrorist organizations seeking access to the ultimate weapon of war, which could generate both a significant cash haul for North Korea, as well as help them strike the U.S., albeit indirectly.

In 1998, al Qaeda leader Usama bin Laden declared in a religious edict that acquiring and using weapons of mass destruction (WMDs) was his “Islamic duty.” In 2008, current al Qaeda leader, Ayman al-Zawahiri, released a book titled Exoneration within which he uses key Quranic themes (as opposed to an outright religious edict) to justify the use of such weapons.

While N. Korea’s participation in the Olympics is a nice step in engagement, keep this situation in perspective as it has little bearing on a peaceful resolution to the overall crisis. 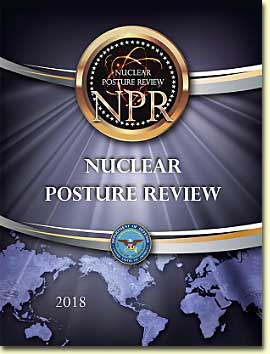 The 2018 Department of Defense Nuclear Posture Review (NPR) is a sweeping analysis and reassessment of the U.S. nuclear weapons policy and doctrine. Thematically, the 2018 NPR shows a dramatic shift from that outlined in the 2010 version, including the loosening of the constraints on the use of nuclear weapons to cover significant non-nuclear strategic attacks. This includes, but is not limited to, attacks on the U.S., allied, or partner civilian populations or infrastructure, and attacks on U.S. or allied nuclear forces, their command and control, or warning and attack assessment capabilities.

1/30 – Security increasing around Capital complex for tonight’s State of the Union address. Expect road closures & restricted access to some areas of downtown DC.

The quarterback calling the plays for Super Bowl LII at US Bank Stadium in Minneapolis, MN is the U.S. government, and in particular, the Department of Homeland Security and Federal Bureau of Investigation. In addition, National Guard troops and law enforcement partners from across the country are patrolling festivities in the Twin Cities area until February 5th. Not so visible are the FBI hostage-rescue team, Tier 1 military counterterrorism assets, detection teams for nuclear, chemical, and biological hazards, as well as response and mitigation teams for those weapons of mass destruction.

Despite these assets, a cloud of concern covers the event, and most importantly, outside of the main security perimeter, given that Minneapolis-St. Paul, or “Little Mogadishu” as the locals call it, is home to the third highest number of terror prosecutions in the U.S. since 9/11.

These are just a few of the ties between the Twin Cities area and Islamic terrorism.

Readers are reminded that as AlertsUSA has warned, almost weekly, over the past two years, the Islamic State and al Qaeda have repeatedly called for followers to carry out attacks in the U.S. and other Western nations using any means available.

Caution and vigilance are urged.

Fears of US ‘bloody nose’ attack on North Korea on the rise
N. Korea would see blanket ban of oil supplies as declaration of war
China Wants New Nuclear Weapons to Keep Up With U.S. and Russia
Do the Americans know who they’re fighting in Afghanistan — or why?
Long Shadow of A.Q. Khan: How One Scientist Helped the World Go Nuclear
Australian Gov Secret ‘Cabinet Files’ Were Found In … An Old Cabinet
The Taliban is gaining strength and territory in Afghanistan
U.S. hails Olympics security plan; opposes North Korea military parade
Philippine guerrilla chief held after peace talks scrapped.
Duterte bent on rewriting Philippine constitution
Wanted: A Strategy to Limit China’s Plans for the S. China Sea