8 Tips For Flying With A Firearm

By Mark, a contributing author to SHTFBlog & Survival Cache 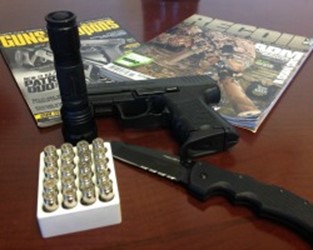 There is a misconception out there that traveling with a firearm is difficult or a pain in the ass.  In my opinion this could not be further from the truth.  Recent changes by the TSA have made it even easier then it was before.  With just a little bit of pre-trip planning, you can provide extra security and peace of mind for you and your family when you are on vacation or business travel.  Almost every time I fly, I bring my pistol.  The break even for me is how many days I am going to be gone and who is traveling with me.  If I fly in and out on the same day, no gun.  If I stay overnight or if I am traveling with my family, I bring a gun.  It is really that simple of a decision for me.

Have Gun, Will Travel 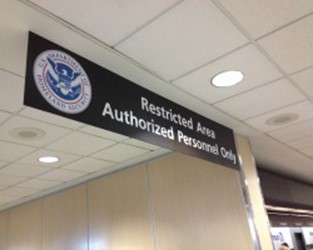 I am always a little blown away when I talk with fellow survivalists and they tell me that they are traveling for work or vacation without a firearm.  I can totally understand this if they are traveling out of the country or to one of the former Soviet States such as California, New York, Connecticut, or Illinois.  But when you are traveling from Colorado to Texas by plane and have to be in Dallas for a week on business, you need to have your gun.  The great state of Texas has reciprocity with Colorado for concealed carry permit holders, which means that if you have your Colorado permit, you can legally carry in Texas (Go to USACarry.com to check your state’s reciprocity agreements). 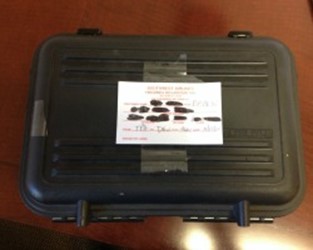 The excuse that I hear most often is, “I wanted to take my gun but it is a pain in the ass.”  Pain in the ass?  A pain in the ass is getting into a gun fight and not having a gun.  I am here to tell everyone that traveling on an airplane with a firearm is a piece of cake.  In fact, it has gotten easier over the last few years.  With all of the trouble in this world, with all of the crazy people, I just feel better when I have a gun on me.  I am safer, my family is safer, and the people around me are safer.  When I have to travel by plane, it just takes a little prior planning to make it a successful trip with a gun.  It really comes down to two things.  Knowledge and a hard sided lockable gun case.

Why Bring A Gun?

This is a question that is asked often by my liberal girlfriend.  “Why do you need a gun?”  Or sometimes I hear “If that gun makes us miss our flight then you are in big trouble.”  My answer is easy and consistent, “The world is full of crazy people, we are better off if I have a gun.”  It is hard for her to argue against that one.  You only have to look on the SurvivalCache/SHTFBlog facebook page to see the latest self-defense articles to know why you should carry if you are legally able to do so.  If you are like me, you believe that the next major Al-Qaida or ISIS terrorist attack will not be carried out by 19 hijackers with box cutters on an airplane, it will be a Mumbai style or the Westgate Shopping Mall style terrorist attack in Nairobi, Kenya.  Four terrorists attacking a heavily populated location with assault rifles, ammo, assault vests and a will to kill a lot of people can do some serious damage the American psyche.  The problem is that unless these sleeper cells are picked up by FBI/NSA type tracking, they are almost unstoppable.  As countries like Israel know, a determined terrorist will always finish the task that they set out to do unless equally determined men and women stop them.  The larger threat to American travelers is not from terrorists but from the chance of common crime such as armed robbery, carjacking, drug-related robbery, and burglary. 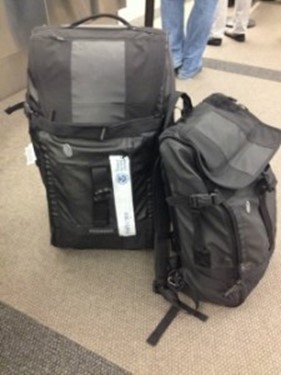 My first “Have gun, will travel” experience came back in the early 2000′s when the assault weapons ban ended.  I purchased an AR-15 in the Midwest and flew from Chicago to Seattle with my new rifle.  I was pretty nervous since this was my first time traveling with a firearm.  I checked the TSA’s website and called the airline to get the low down.  After getting all of the information and doing a little bit of planning, I traveled to the airport and walked up to the ticket counter.  I told the person who was working there that I was flying to Seattle and I needed to check one bag and also declare a firearm.  She gave me that look like “Am I going to have a problem with this guy?”  I just gave her a smile and showed her my ID.  Back then traveling with a firearm was a pain in the ass.  She then had to stop what she was doing and walked me over to the TSA guys.  The TSA gave me a firearms declaration form to fill out and then opened my gun case, wrote down the serial number of my firearm, made sure the case was locked tight, then wrapped my gun case in yellow tape.  They then took my rifle and told me that I could retrieve it at a special TSA pick up window at the Seattle airport.  When I arrived in Seattle, I had to go to baggage claim, wait for my regular bags.  Then after I got my bags, I went to the TSA window and got my rifle.  It was a little bit of a pain in the ass but now all of that has changed. 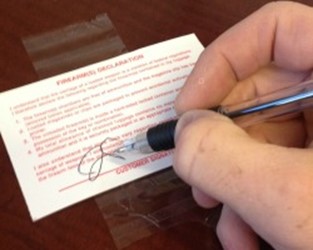 The new TSA process is a little more streamlined.  Like before, you still have to see the ticket agent like you were checking a bag and declare your firearm.  Declaring your firearm is really an easy process.  Here is an example of what I say “Hi, my name is Mark Puhaly and I am flying from Dallas to Denver and I would like to declare a firearm.”  The ticket agent then checks you in for your flight and gives you a firearms declaration form to fill out.  Once you have done that, the agent either tapes the firearms declaration form on your TSA approved firearms case or gives the form to you and asks you to tape it to the case.  You can pack your ammo in the same suitcase as your firearm but I recommend that you do not put your ammo inside the same hard sided gun case that you are storing your firearm unless your actual gun case is the only bag that you are checking (for example if you are checking a hunting rifle).  Although it is not illegal to do so, I think that it just makes things easier when you are talking to the airline agent and TSA “My firearm is unloaded in a locked hard sided case inside my suit case and my ammunition is securely packed in a separate case.”  Really I think it is the ammunition that freaks people out.  People think that is is going to blow up.  Most of the questions that I have received from TSA and the airlines when I fly with a firearm has to do with my ammunition. 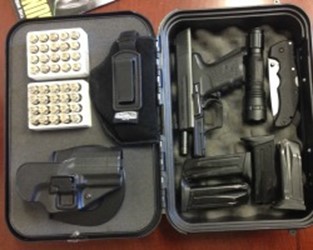 Also, your ammo cannot be lose, it must be in the factory packaging or an ammo case.  After you have filled out your form and get checked in for your flight, the airline person then signals an airport courier, who comes over, grabs your bag containing the firearm and walks you and the firearm over to the TSA counter (You have to go with the courier for this step).  From there, you stand and wait for TSA to scan the bag with the firearm.  Once they have completed their scan, they give you the thumbs up.  The airport courier then retrieves the firearm from TSA and he or she is then responsible for putting your firearm bag into the baggage system which then transports the bag to the baggage handlers and onto your flight.  I usually walk with the courier back to airline desk and watch my bag get loaded onto the carousel before heading to security.  After your flight, you simply go down to baggage claim and get your bag from the same baggage carousel as everyone else on your flight.  It is really that simple.

Here Are 8 Quick Tips When You Fly With A Gun 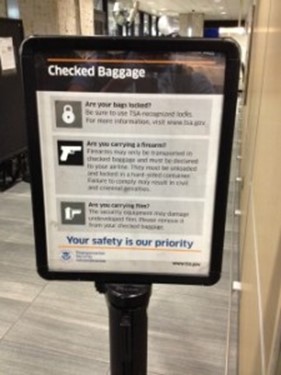 1.  Check The Laws – If you are planning to carry a concealed firearm, check the local state laws before you fly to that state for reciprocity with your state. (Click Here For Map)  Also, if you are flying with a long rifle, check to see if they are legal in the state you are flying to.  It is not a good idea to fly into New York with an AR-15.

2.  Get A Good Gun Case – Prior to your flight, buy a hard lockable case and check on TSA approved locks.  I have never had a TSA agent look at my case.  I think as long as it is a hard case with a lock, you are good to go.

3.  Get A Good Case For Your Ammo – Buy a hard plastic carrier for your caliber of amm0.  You can also use the factory packaging but I prefer a hard ammo case.  The ammo just cannot be lose in your checked bag.  Most airlines allow you to bring 11 pounds of ammo, double check with your airline’s website before you fly.

4.  Keep The Keys With You – If your lockable case requires a key, keep the key in two separate locations.  I like to keep one key in my backpack and one in my pocket. 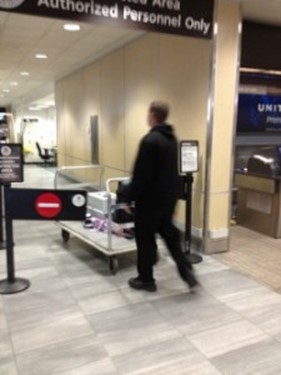 5.  Remind Yourself – Give yourself a reminder to declare the firearm.  I like to carry my small ammo hard case in my hand as I walk up to the airport.  That way I can’t forget to declare my firearm.  Every year, people forget and get mixed up with the TSA.  Don’t be that guy.

6.  Make Sure Your Gun Is Unloaded – Sort of a no brainer but you would be surprised.  When I fly, I have all of my mags unloaded and separated from my gun, with the slide or bolt locked open to the rear.  Again, plan your trip.

7.  Don’t Be A Jackass – Smile, be nice.  The airline agent, the airline courier, and the TSA employees all have a job to do.  This is not a time to joke around, just smile and say “I would like to declare a firearm.”  A little bit of kindness can go a long way.

Good luck, I hope your travels are safe and fun and hopefully you will never have to use your firearm.  Want more information?  Here are the actual TSA guidelines from the TSA’s website.