With the anniversary of the invasion of
“Manhattan” near, the Mojahedin are
achieving a record number of the
operations, and the American and the
French forces are on the target list

With the anniversary of the invasion of Manhattan near, the mujahideen are achieving a record number of operations during one week, and the American and French forces are on the target list”

This week, the Mujahideen achieved a record number of operations, as the Mujahideen carried out 94 operations in 8 jihadist battlefields (East Africa, Khorasan, the Indian continent, West Africa, al-sham, the Arabian Peninsula, Baluchistan, and Central Africa). More than 357 people were killed in these operations. more than 259 apostates were event, the Mujahideen managed to shoot down 3 aircraft in a week.

The most supreme operations of the mujahideen this week were in East Africa, where a booby-trapped vehicle struck an army convoy to occupy the American Crusader south of Somalia, 4 American soldiers were killed. 3 wounded, and 3 American armored vehicles were destroyed, in addition to the loss and injury of about 20 Somali special forces apostates, while the Crusader American government admitted wounded 4 high-ranking officer of the American army in the operation, concealing its losses as usual. in addition to dozens of operations against the crusaders’ apostates in Somalia and Kenya.

And to West Africa, where two soldiers were killed and a third wounded and an armored vehicle of the French Crusader army was destroyed by detonating a bomb planted by the Mujahideen in the Islamic state of Kidal in northern Mali.

These days are approaching the nineteenth anniversary of the blessed Manhattan invasion that set the cross back and changed the course of history. The mujahideen’s operations are still continuing, and the crusaders depletion is doubling, despite America’s claim to eliminate the mujahideen months after the blessed invasion. 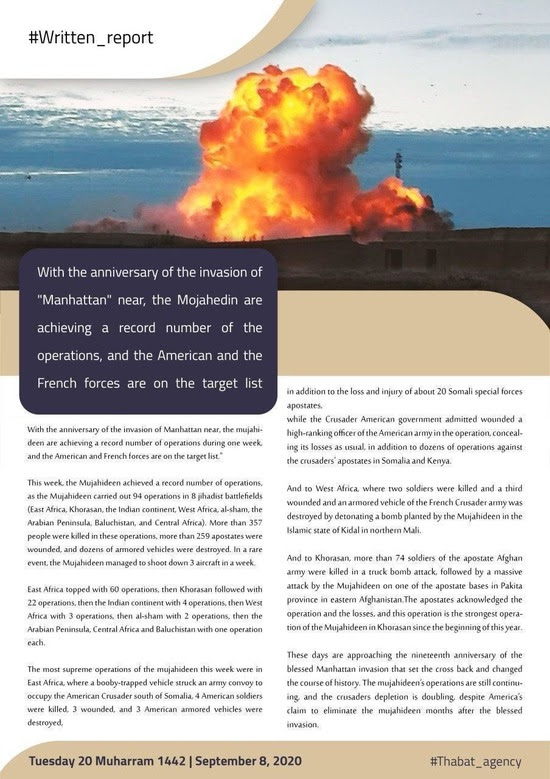 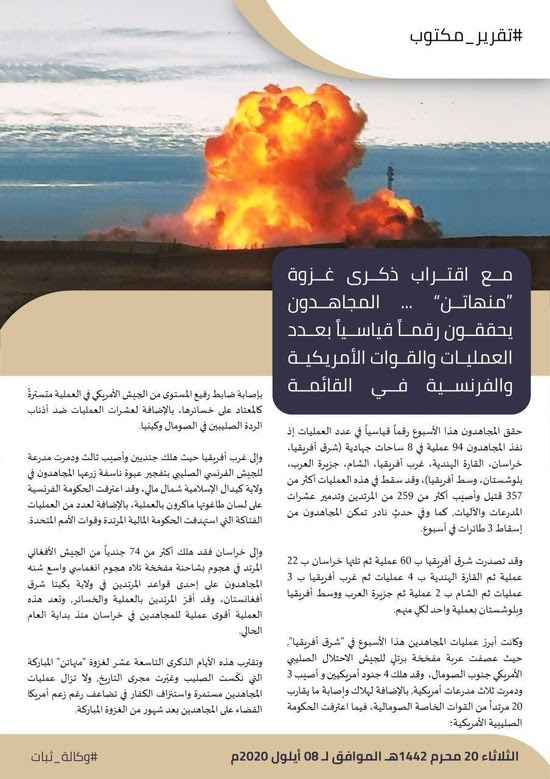