In just the last twelve months Congressional members and top level administrators at the Department of Homeland Security have warned of threats to the national power grid so serious that should they occur life in America as we have come to know it would change almost instantly.

Former DHS head Janet Napolitano, in a letter to her successor, advised that “a massive and serious cyber attack” on the US Homeland is imminent and that a “natural disaster — the likes of which the nation has never seen — is also likely on its way.” This was followed up by a comment from House Homeland Security Committee senior member Yvette Clarke (D-NY) who noted that, “the likelihood of a severe geo-magnetic event capable of crippling our electric grid is 100%.”

Couple those threats with the realistic possibility of a rogue or state-sponsored attack on America by way of a super electro-magnetic pulse weapon, and the odds of a widespread American Blackout increase dramatically.

With our complete dependence on the power grid to maintain the regular flow of commerce, communications, and emergency services, even a short-term grid-down event could lead to serious consequences.

According to a report commissioned by the Department of Homeland Security which cites data from the Oak Ridge National Laboratory, the infrastructure supporting our power grid is so outdated and vulnerable that an attack or natural disaster could lead to an outage scenario of unprecedented scale.

If you live in or around any of these areas you can expect a societal breakdown within 72 hours or less – and with traffic systems inoperable and roadways likely jammed, there’ll likely be no way out. 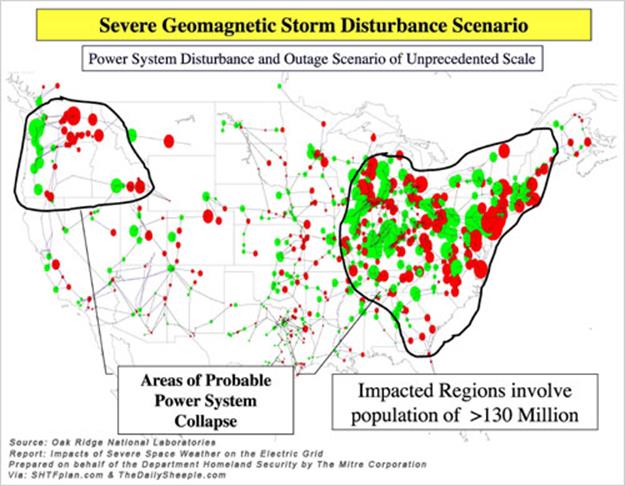 The core of our grid – what makes it tick – are the transformers that pass power from one node to the next. These often weigh in the hundreds of tons. Most are no longer produced in the United States, so any damage would require the importation of parts or complete units from China. If one or two go down, the outage is manageable. But a cascading collapse resulting from extreme electrical surges across our power lines, such as those originating from an EMP attack or solar flare, could result in scores of transformers being put out of service simultaneously.

There are roughly 300 of these mega-transformers that make up the backbone of America’s electrical infrastructure. At current world production rates it could take anywhere from 12 – 18 months to manufacture and deliver a new unit if it is destroyed.

As noted by The Daily Sheeple:

The report has generated great interest in government and the public, largely owing to the projected scenario of catastrophic damage, including: 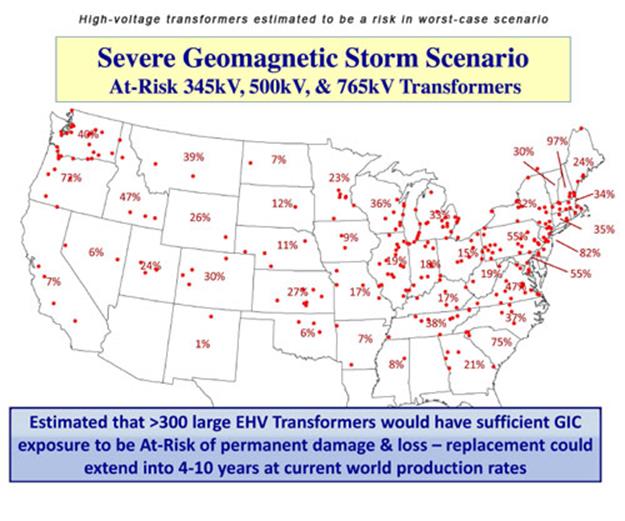 All things considered, the restoration of power across the United States in such a scenario would be 4 to 10 years.

Chris Carrington of The Daily Sheeple highlights the fall-out and what we can expect if the threat to our power grid is ever realized:

We have become so reliant on electricity in the last 200 years, it’s difficult to imagine life without it. Those who rely on refrigerated medications would be hard hit within hours of the power going off, as would those who rely on regular oxygen cylinder deliveries to their homes.

The usual back up power in hospitals is 72 hours. After that life support machines and operating rooms will cease to function.

Pumps at gas stations will no longer dispense fuel affecting everything from the family car to the food supply.

Water treatment and pumping stations will cease to function, again this will affect a wide range of services we take for granted, drinking water, sanitation and even firefighting will be limited or non-existant for millions. Contestation over water in lakes and rivers will be a source of ongoing conflict for years after the event.

Many factories that make parts for transformers will not be able to do so, leaving the United States at the mercy of foreign powers for transformers and parts. (If those countries have not been affected by the event themselves.)

The very fabric of the only society we know will come to a grinding halt within a week of the grid going down.

We know it would be mere days before panic, looting and rioting took hold. Law and order would fall apart.

Based on previous studies, we know that out of those 130 million people east of the Mississippi who would be affected by such an outage, 117 million would be dead within a year.

Unless you have nearly unlimited financial resources, stockpiling supplies for a four to ten year grid down scenario is pretty much out of the question. But you can take the brunt of that first year and beyond if you prepare ahead of time.