In the northern Arizona city of Williams, restaurant patrons don’t automatically get a glass of water anymore. Residents caught watering lawns or washing cars with potable water can be fined. Businesses are hauling water from outside town to fill swimming pools, and building permits have been put on hold because there isn’t enough water to accommodate development.

Officials in the community about 60 miles from the Grand Canyon’s South Rim have clamped down on water use and declared a crisis amid a drought that is quickly drying up nearby reservoirs and forcing the city to pump its only two wells to capacity.

The situation offers a glimpse at how cities across the West are coping with a drought that has left them thirsting for water. More than a dozen rural towns in California recently emerged from emergency water restrictions that had a sheriff’s office on the lookout for water bandits at a local lake. One New Mexico town relied on bottled water for days last year. In southern Nevada, water customers are paid to remove lawns and cannot install any new grass in their front yards.

Officials in Williams jumped straight to the most severe restrictions after receiving only about 6 inches of precipitation from October to April — about half of normal levels — and a bleak forecast that doesn’t include much rain. City leaders acknowledge the move is extreme but say it’s the only way to make the city has enough water to survive.

“We knew we had to take some action to preserve the water,” Mayor John Moore said.

Reservoirs that supply residents’ taps are so low that they reveal tree stumps, plants and cracked earth once submerged by water.

Businesses are feeling the effects, too. The Grand Canyon Railway, which shuttles tourists from Williams to the national park, is using water recycled from rainfall, drained from a hotel pool and wastewater purchased in nearby Flagstaff to irrigate its landscaping and run steam engines.

Residents are praying they get some relief soon.

“I still have hope God will send us the rain,” said resident Jan Bardwell.

Communities across New Mexico also have seen their drinking water supplies dwindle in recent years due to severe drought and aging infrastructure. The town of Magdalena last summer was forced last summer to turn to bottled water after its well failed.

In the far western Texas city of El Paso, residents can’t water outdoors on Mondays. And officials have been reusing treated wastewater and investing in a major desalination plant that turns salty, unusable groundwater into a drinking source for the border city.

As Williams waits for moisture, Moore said city officials are exploring whether new wells will help secure a more sustainable water source. He said water conservation should take residents through the next couple of months until the rainy season arrives and winter returns.

In his home, Moore is taking shorter showers, flushing the toilet less often and thinking twice about dumping out water he doesn’t drink.

Other residents are using buckets to collect cold water that normally would go to waste while they wait for a hot shower, he said. Automatic shut-off devices are planned for showers at the city pool, and signs at water filling stations declare them off-limits to commercial water haulers.

Excessive water consumption could be costly under the restrictions. Residents using more than 15,000 gallons of water per month will see their bills rise by 150 percent to 200 percent. The penalty for using potable water outdoors for anything but public health or emergencies comes with a $100 surcharge that doubles for subsequent violations.

The Grand Canyon Railway poured tens of thousands of dollars into a landscape remodel last year that was watered with city taps. This year, the company had to gather that water from other sources, bringing in three rails cars to store it onsite.

It was a scenario that general manager Bob Baker didn’t see coming. “It’s drastic,” he said. 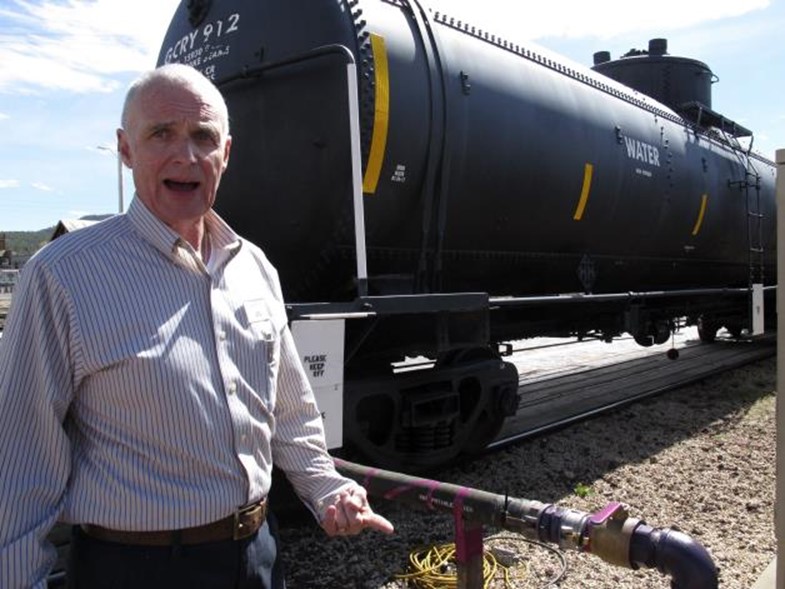 In this April 11 photo, Grand Canyon Railway train operations general manager Bob Baker poses with the rail cars that are storing water for use on the property in Williams, Ariz.

Other northern Arizona towns have less-stringent water restrictions. In Payson, residents are on a schedule for outdoor watering or washing cars. They are prohibited from putting in new grass and must choose from drought-tolerant plants for landscaping.

The goal for each person is to use no more than 89 gallons of water per day, but residents have averaged better than that at 70 to 75 gallons daily over the past decade, Mayor Kenny Evans said.

Water rates that increased decades ago allow the town to offer rebates for low-flow toilets and other water-saving devices. Payson has positioned itself well enough to extend water services to nearby communities while preaching conservation.

“We don’t have enough water to waste it,” said Evans, president of the Northern Arizona Municipal Water Users Association.

In Williams, Moore recently looked out at the reservoirs surrounding town in anticipation of a monsoon season that could help replenish them.

“We know in due time, the lakes will fill back up, the snow will come,” he said.

Interesting that they “know” this will happen, and not that they “hope” it will since it has before.