As was pointed out earlier in the article: Ebola Has Not Gone Away it was suggested that during October 2014 the mainstream news media had been told to ‘shut up’, it has just been revealed that the CDC is monitoring 1400 ‘active’ Ebola cases in the United States – and it’s NOT on their website… 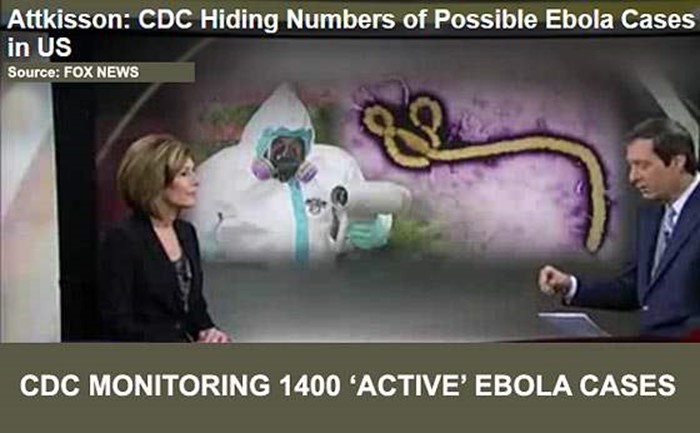 Investigative journalist Sharyl Attkisson said the CDC is not putting out the current information on how many potential cases of Ebola they are currently tracking in the Untied States.

“I called CDC not long ago and I said how many cases are being monitored in the United States and they said 1,400.”

“They said they’re not putting it on the web.”

This is public information we have a right to know.

By the way, Sharyl Attkisson, a former CBS News reporter who was constantly at odds with the Obama administration, is the same reporter who was a victim of sophisticated hacking of her computers by ‘big brother’ – a highly publicized event several months ago. Can you say, NSA?

While some people reading this do understand the bigger picture (that the ‘government media complex’ is well known to be working together – sometimes covering up or distorting the real facts), it is my opinion that the behavior (of hiding this Ebola information) is not in our best interests as American citizens.

It is the self-responsible duty of every American to dig (or at least scratch the surface) beyond just the mainstream news to discover more about what may be happening in the world around us – some of which may directly affect our life or the decisions we make.

I am actually very surprised that we have an investigative journalist who actually reported this – and it was actually aired on FOX News. That in and of itself is surprising.

Do you think we will find out more about the 1400 ‘active’ Ebola cases being monitored in the United States, or where they are located? I doubt it… at least not from the CDC or mainstream.