A Wall Street Journal columnist has advised people to “start stockpiling food” and an ABC News Report says “there are worrying signs appearing in the United States where some … locals are beginning to hoard supplies.” Now there’s concern that the U.S. government may be competing with consumers for stocks of storable food.

“We’re told that the feds bought the entire container of canned butter when it hit the California docks. (Something’s up!),” said officials at Best Prices Storable Foods in an advisory to customers.

Spokesman Bruce Hopkins told WND he also has had trouble obtaining No. 10 cans of various products from one of the world’s larger suppliers of food stores, Oregon Freeze Dry.

He said a company official told him on the telephone when he discussed the status of his order that it was because the government had purchased massive quantities of products, leaving none for other customers.

That, however, was denied by Oregon Freeze Dry. In a website statement, the company confirmed it cannot assure supplying some items to customers.

“We regret to inform you Oregon Freeze Dry cannot satisfy all Mountain House #10 can orders and we have removed #10 cans from our website temporarily,” the company tells frustrated customers. “The reason for this is sales of #10 cans have continued to increase. OFD is allocating as much production capacity as possible to this market segment, but we must maintain capacity for our other market segments as well.”

The company statement continues, “We want to clarify inaccurate information we’ve seen on the Internet. This situation is not due to sales to the government domestically or in Iraq. We do sell products to this market, but we also sell other market segments … The reason for this decision is solely due to an unprecedented sales spike in #10 cans sales.

“We expect this situation to be necessary for several months although this isn’t a guarantee. We will update this information as soon as we know more. We apologize for this inconvenience and appreciate your patience. We sincerely hope you will continue to be Mountain House customers in the future,” the company statement said.

But Hopkins wasn’t backing away from his concerns.

“The government just came in and said they’re buying it. They did pay for it,” he said about the summertime shipment of long-term storage butter. “They took it and no one else could have it.

“We don’t know why. The feds then went to freeze dried companies, and bought most of their canned stock,” he said.

A spokeswoman for Oregon Freeze Dry, sales manager Melanie Cornutt, said that the increasing demand for food that can be stored has been on the rise since Hurricane Katrina devastated large sections of the Gulf Coast, cutting off ordinary supply routes.

“We are currently out of stock on our cans. We are not selling any of our cans,” she confirmed.

She then raised the issue of government purchases herself.

“We do sell to the government [but] it is not the reason [for company sales limits],” she said.

Officials with the Federal Emergency Management Agency said whatever government agency is buying in a surge it isn’t them. They reported a stockpile of about six million meals which has not changed significantly in an extended period.

But Hopkins said it was his opinion the government is purchasing huge quantities of food for stockpiles, and Americans will have to surmise why.

“We don’t have shelters that are being stocked with food. We’re not doing this for the public. My only conclusion is that they’re stocking up for themselves,” he said of government officials.

“It came to our attention today, that the world’s largest producer of storable foods, Mountain House, is currently out of stock of ALL #10 cans of freeze dried foods, not just the Turkey Tetrazzini. They will NOT have product now through 2009,” she said.

“This information was learned by a Mountain House dealer who shared it with me this morning. In personally talking with the company immediately after, Mountain House verified the information is true. Customer service stated, ‘I’m surprised they don’t have this posted on the website yet.’ She said they have such a backlog of orders, Mountain House will not be taking any #10 can food requests through the remainder of this year and all of the next.

“Mountain House claims this situation is due to a backlog of orders, which may very well be true, but who is purchasing all of their food? This is a massive global corporation.

“One idea: the military. Tensions are ramping up with Iran and news segments debate whether or not we will implement a preemptive strike in conjunction with Israel,” she wrote.

Hopkins raised some of the same concerns, suggesting a military conflict could cause oil supplies to plummet, triggering a huge increase in the cost of food – when it would be available – because of the transportation issues.

The ABC report from just a few weeks ago quoted Jim Rawles, a former U.S. intelligence officer who runs a survival blog, saying food shortages soon could become a matter of survival in the U.S.

“I think that families should be prepared for times of crisis, whether it’s a man-made disaster or a natural disaster, and I think it’s wise and prudent to stock up on food,” he told ABC.

“If you get into a situation where fuel supplies are disrupted or even if the power grid were to go down for short periods of time, people can work around that,” he said. “But you can’t work around a lack of food – people starve, people panic and you end up with chaos in the streets.”

At his California ranch, the location of which is kept secret, he said, “We have more than a three-year supply of food here.”

His concern was about various food shortages around the globe, and the fact that in a global market, prices in the U.S. reflect difficulties in other parts of the world quickly.

Professor Lawrence F. Roberge, a biologist who has worked with a number of universities and has taught online courses, said he’s been following the growing concern over food supplies.

He said that naturally would be kept secret to avoid panicking the public, such as when word leaks out to customers that a bank may be insolvent, and depositors frantically try to retrieve their cash.

Recently the owner of MyPatriotSupply.com was contacted by the Federal Emergency Management Agency (FEMA) by way of email, leading on that something is ready to pop off.

Matt being the patriot he is immediately let others know this disturbing news. He even provided screenshots of the actual email sent by a FEMA representative. The names and revealing information have been blurred out. 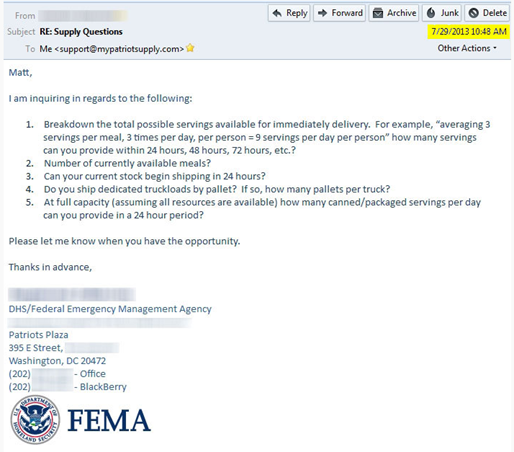 Matt of MyPatriotSupply.com wrote, “here we are, August 2013 and FEMA once again is trying to buy up large stockpiles of food. And they don’t want anyone to know it, and they want to take immediately delivery.

Friends…I’ve studied history. That is what got me into preparedness in the first place. History has shown us time after time that those who depend on the government to come to their aid during a disaster are the ones waiting the longest for help. Sometimes help never comes…or comes too late.

I do not believe these critical emergency food supplies should be in the hands of the government, stored in some secret warehouse only to be brought out and distributed to their own agencies first,  with the rest of us getting table scraps long after we need it.

These life-saving meals belong in the hands of people like you and me. This is why I declined the opportunity to sell to the Department of Homeland Security.

But let’s not forget the most important part of this: Why the sudden sense of urgency? What do they know that we do not?

I’m not one to cry that the sky is always falling, but when DHS/FEMA make a move to quietly buy up emergency food supplies and ask how much we can ship within 24 hours…I think this is far enough outside the realm of what is “normal” to beg some questions.

Fortunately I’ve been in this business long enough to predict what happens next. One or more of the other “survival companies” out there will inevitably see a chance to make a quick buck from Uncle Sam (which is really paid for by us, the taxpayer). This could create a run on many of the core raw ingredients used by emergency food makers that will cause a ripple effect throughout the industry as supply chains become bottle-necked handling the FEMA/DHS request.”

This is extremely disturbing to know.

What is the government gearing up for? A major disaster or war they know is coming?

I myself don’t want to be left in the dark.