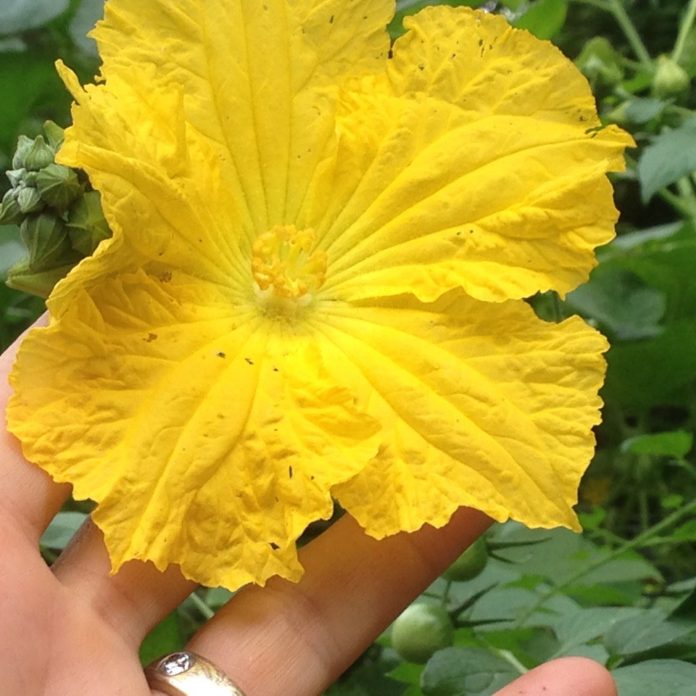 Luffa, lufa, loofa or loofah? You choose. It’s spelled all kinds of ways but it’s most commonly ‘loofah’ in the US and ‘luffa’ in the rest of the world. So whichever way you prefer to spell it, it’s pronounced the same, (like loofah) and it’s a versatile vegetable worth growing!

First of all, I’ll admit it. For a long time I thought loofah sponges came from the ocean. After all, they had the skeletal framework of some creature perhaps kin to the sea cucumber or similar marine animal. And the sign at the store said natural loofah SPONGES.

How long did this misperception last? Well, the revelation came when browsing through a seed catalogue “one day” and in the squash/gourd section, appeared a photo of this “sponge” with a description saying “Grow your own sponge!” I’m pretty sure I made a shameless announcement to the rest of the family that loofas come from a gourd plant. Turned out I’d been a bit behind the curve on this one.

And they are also edible at a younger age. This makes sense being that they are members of the Cucurbitaceae family that includes melons, squash, gourds, and pumpkins! Very cool!

So that bit of revamped knowledge was catalogued and filed away for future reference until one day, a reader of GardensAll.com, Kathlyn Cairns, did what we gardeners love to do. She shared her joy of growing loofahs and sent us some seeds. We started them indoors and set two plants in the back corner of the garden.

Further down in the article we’ve included Kathlyn’s images of her loofah plants and processing.

This year we only grew two plants because loofahs are actually an alien species out to invade the planet! OK, that’s a bit exaggerated but have a look at our photos. The loofa we planted took over our cattle panel arch, a trellis at the back of the garden, and a trellis running parallel to the arch. Oh and BTW–this was just one plant! We think it killed and ate its sibling. 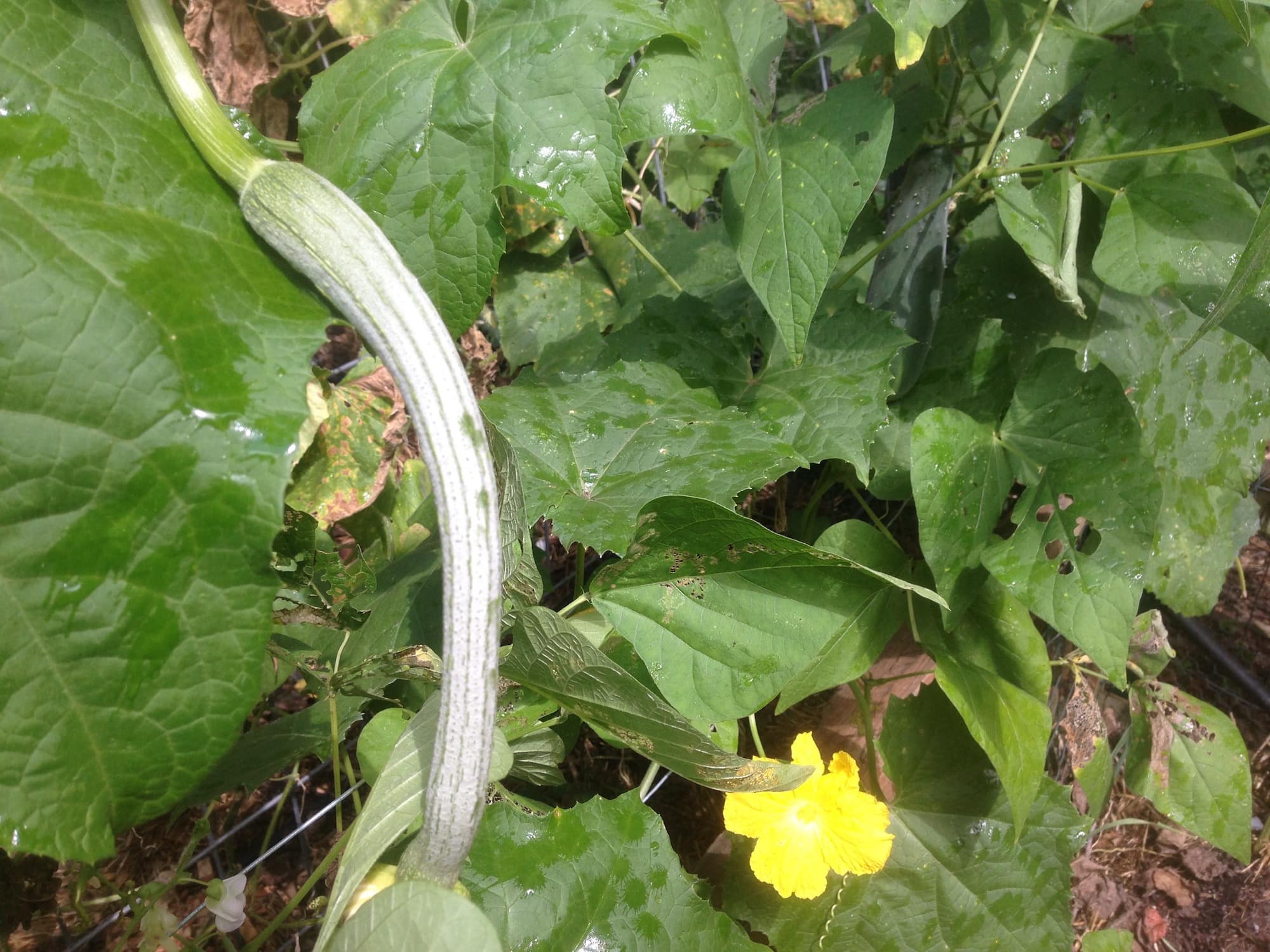 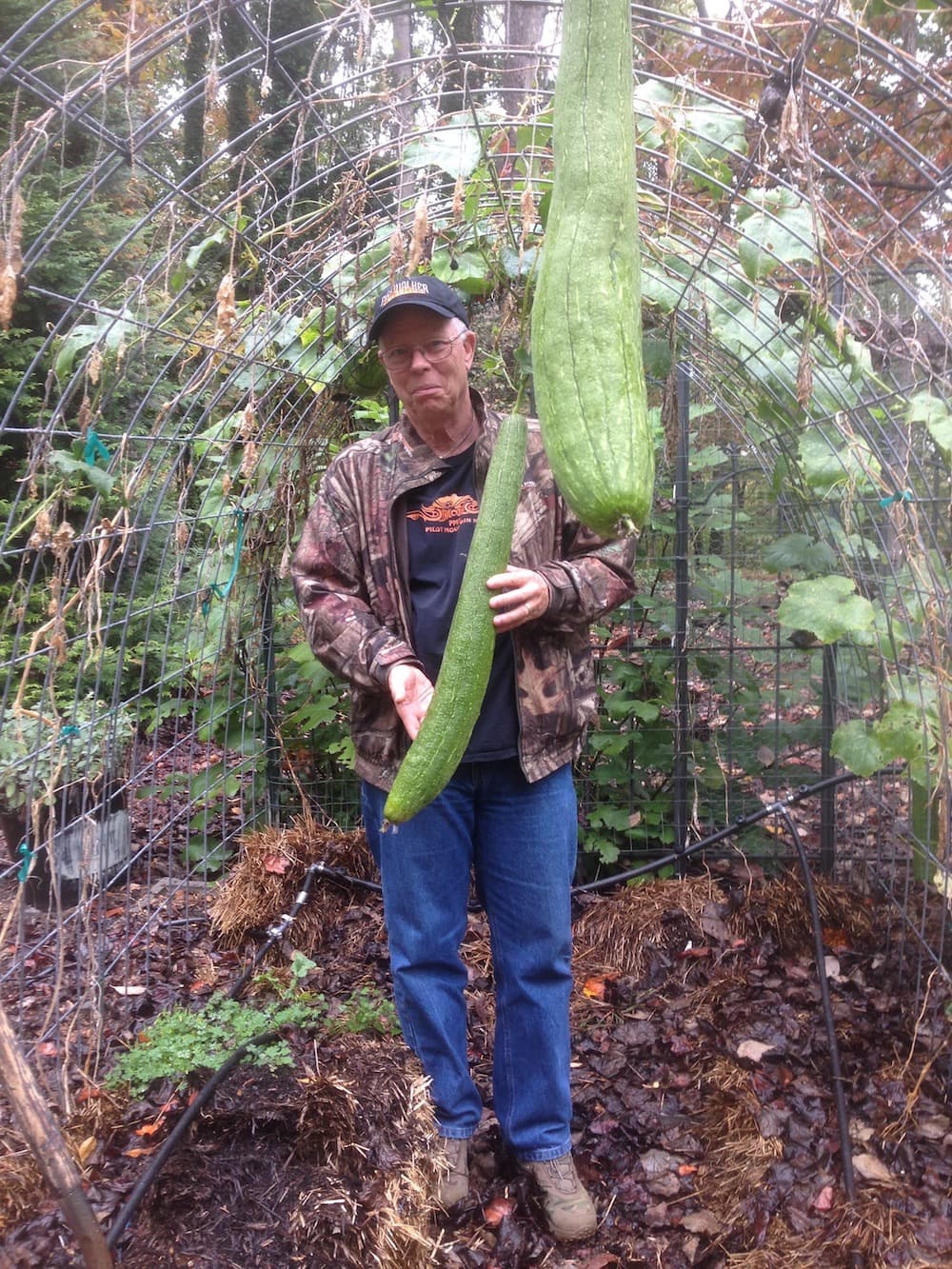 Large loofahs in the GardensAll garden with Coleman Alderson

All Jurassic World references aside, the loofah is an amazingly robust plant. It alone survived the powdery mildew, the squash bugs, and the vine borers all of which devastated our squash, pumpkins, and cucumbers. It thrived into October until a hard freeze and a frost  knocked it out.

The big lesson learned about planting loofah is to do so early. Some varieties take 90 days to mature. If you garden in zones much above Zone 8, it’s a good idea to start them indoors to get a jump on the season. In retrospect, it took a while for the seeds to germinate indoors. That may mean more of a delay if you planted seeds outside past the last frost date.

“[Loofah] seed germination is often slow and sporadic. To obtain good plant stands, luffa gourds should be produced from transplants. Soak seed in warm water for 24 hours prior to seeding. Sow seeds, two to three per cell, in flats. Thin to one plant per cell after the first true leaves appear. Grow for four to six weeks in a greenhouse at about 65-70 oF.[Loofah] should be transplanted outdoors after all danger of frost is past.

Site Selection and Fertilization – [Loofah] gourds require a well-drained soil in a location where they will have full sun and good air circulation. Conduct a soil test prior to planting and follow lime and fertilizer recommendations for cucumbers.

Planting and Trellising – To speed growth in the spring in cooler climates, [Loofah] gourds should be grown on raised beds with black polyethylene mulch. Irrigation is required with drip-irrigation being the preferred method. [Loofah] sponge gourds benefit greatly from being grown on a trellis system. If [Loofah] gourds contact the ground, fruit rot, discolored sponges, and misshaped gourds are usually the result. A vertical trellis, similar in design to ones used for trellised cucumbers and pole beans, is most commonly used. It must, however, be VERY STURDY!!. To support the weight of mature gourds, 4″ x 4″ posts set ten feet apart are recommended. The top horizontal support should be a heavy gauge wire or cable. Several other wires can be run horizontally between the top wire and the ground. To help train the vines to the trellis, string can be run between the top and bottom wires in a V-pattern, as for pole beans, or a nylon mesh can be used.

Space rows five or more feet apart to accommodate equipment. In-row spacing of 12-18 inches has produced the highest yields of marketable sponges. The plants need to be hand trained weekly until they reach the top wire. Try to keep all fruit off the ground and away from the trellis wires. Prune plants by removing the first four lateral shoots (from the soil line upwards). As for all cucurbits, [Loofah] gourds need to be pollinated. (GardensAll note: Look for ways to invite bees and other pollinators to your garden space) 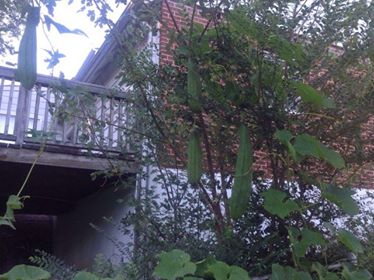 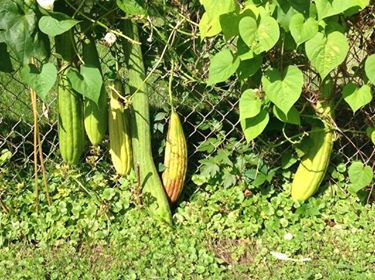 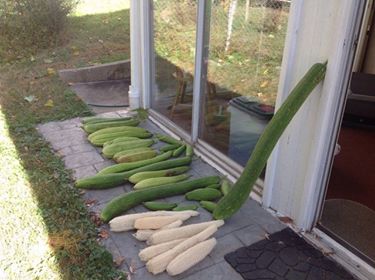 Opinions vary as to the optimum time to harvest the gourds. Some leave them on the vine till they turn brown and the interior “sponge” separates naturally from the skin. Others take them earlier when they are just turning brown and find that they can “cure” them by placing them in a warm dry spot. 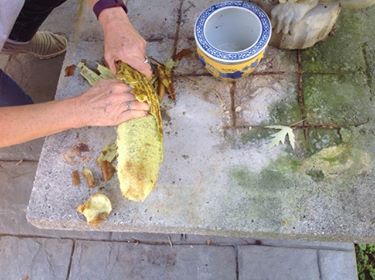 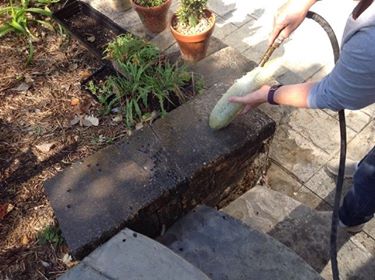 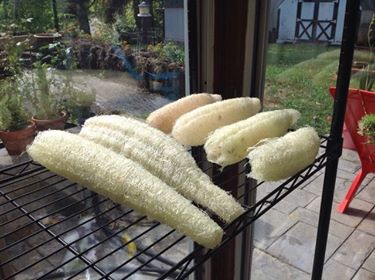 We opted for the latter timing mainly because we had a big freeze on the way and were wary of what might happen should the loofahs freeze. So, we picked and placed them in a dry warm place and allowed them to cure. Ours were “mummified in less than 2 weeks. You can see how to remove the outer skin with a simple putty blade.