In this as in every thing else I build, I strive to use or reuse what is around me. What with our economy in the toilet, everyone I know is trying to save every penny they can or at least that’s what they tell me.

Last winter I was really wanting some bread to go with some stew I’d fixed. It had snowed and we had several inches to a foot here in the foothills. I didn’t really want to get out and try to drive to town. Sitting and casting my eyes about my modest cabin I saw a # 10 can that had had beans in it. I can only warm myself for so long with beans……..

My primary source of heat and cooking in the winter is a Vogelzang box wood stove. I can make a mean stew or any thing fried on it.

Since it was empty, I sat for a while turning it over and decided I would try to make an oven from it. I trimmed about a 1/4 of an inch from the lid or top if you will. This is so the empty can, once inverted will set down over the lid which is the cooking plate. Thinking I would need a trivet I emptied a 7.5 ounce salmon can. I went on to make salmon patties, yum. 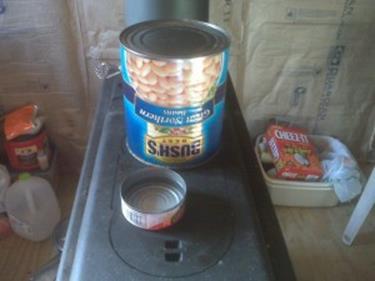 I covered the lid with aluminum foil, also I tried it without the foil, placed the salmon can (a tuna can works well also) placed a few tablespoons of water in the trivet (salmon can) set the lid on the trivet, placed the dough ball on the lid and placed the can inverted over the trivet-lid. 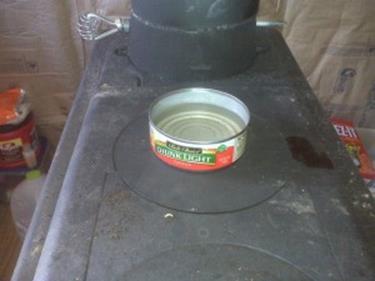 All that was set on the wood burner. I stoked up the fire awhile ahead of time, using what Jakey calls biscuit wood. Here we just call it small stove wood. The cabin got toasty warm and soon I had the wondrous smell of baking bread drifting around me. I watched, waited and kept the fire burning pretty hot and in about 15 minutes the first small loaf was done. I quickly greased the lid refilled the water and started another. This loaf took a bit shorter to bake as everything was quite hot. You may want a pair of gloves while removing the cover and cooking tray (lid) 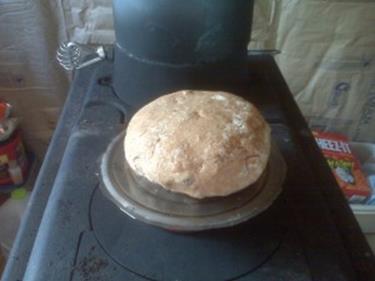 I found that without water the bread with be a bit tougher. For the next 2-3 weeks I baked a wondrous variety of breads, mini pizzas, potatoes and more stuff in this simple little oven. 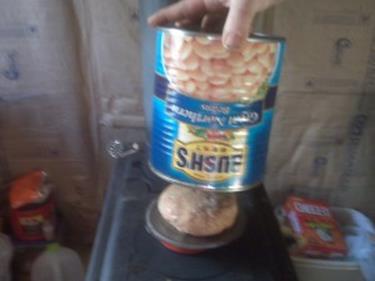 I’m not going to go into any recipe detail, ’cause everyone has different taste’s. To suffice to say that I used a basic bread recipe and experimented. The steam while baking makes a loaf that’s a cross between a muffin and a bagel I think. 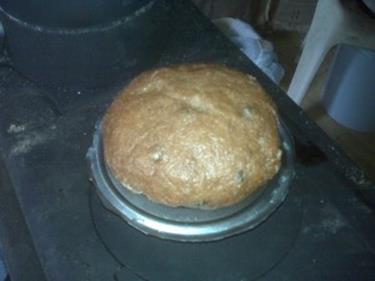 Sour dough rolls came out really well in this also.

Now down to the nitty gritty. The cost for this was a big flat ZERO. The cans were on their way to the trash bin when the fortune of snow came. The savings are that I don’t have to buy any bread any more. Figuring the cost of a loaf of good bread starts at 3.50 and goes up, I know in a month or so I saved enough money to get a NEW 20 quart cast iron dutch oven that I use outside for large loves and other items. I expect that my monthly savings are on the order of 150 bucks a month.

Here is a tip, if you like flat breads and have 2 skillets the same size, set one on your stove and them turn and invert the other on top of the first one. Instant dutch Oven!!! I use this frequently for all my flat breads and small pizza’s.

Many people have been impress with both the # 10 oven and the inverted skillet oven. Some Mormons I know have said they would try them on their outings.

So there you have it, another money saving idea. I hope you find this useful to you,