How To Make Your Own Sugar 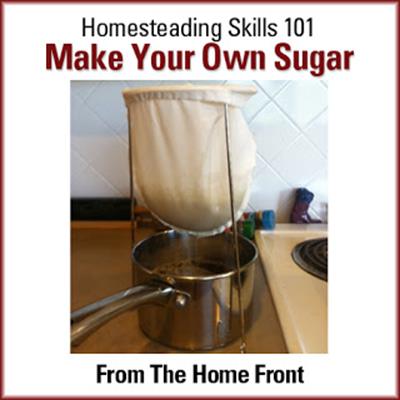 Making My Own Sugar

It started like this. In my quest for self-reliance, I wanted to have the ability to produce my own sugar if need be. I planned on adding honey bees to the farmstead this last spring – but ‘we’ spent money on a new chainsaw instead. My next thought was maple trees? Not unless I could pay to put in a bunch of 10 year-old sugar maple tress, hope they all lived, then maybe in another 10-15 years when they started to mature I would have some smallish trees I might be able to tap. Stevia plants? I found out, not only do they not grow in my zone, but I have noticed that they are rather finicky to grow indoors and don’t like big shifts in temperature. That wouldn’t work in our house with wood heat. Then I found my answer through my grandma.

Sugar Beets. They used to grow them when my grandma was a child – but not just a couple of rows of them, they would plant a small field of them. She said that when they used the sugar from them, it was always a super dark brown sugar. So if one were using it in something like white cake or egg nog, that it would darken the color of what they were making but she remembered it still tasted really good. She said they processed them outside, because they smelled a little. Sugar beets contain 10-16% sucrose, compared to a sugar maple sap at 2% – this is why you need up to 40 gallons of sugar maple sap boiled down to make one gallon of maple syrup. The process is a tad quicker with sugar beets. 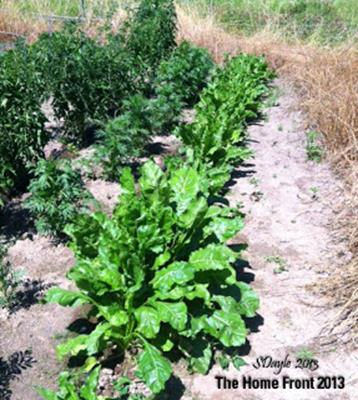 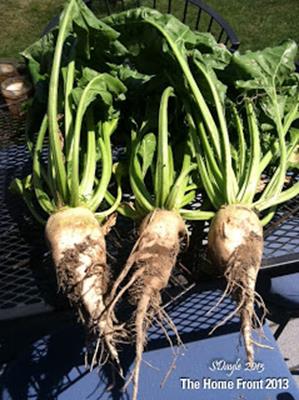 With a little research, I found a place to buy sugar beet seed and another place here and saw that they would grow perfectly in our Zone climate. They can be planted 4 weeks prior to the last frost, are cold hardy, and grow in full or partial sun. They also do not require a lot of water which makes them perfect! Sugar beets are cousins of turnips so their greens are completely edible for people, chickens, horses, pigs and cows. Needless to say, they did not go to waste at my place. They are really low maintenance and I really enjoyed growing them – you can pull them in mid summer or you can wait and pull them in the fall.

Do not worry about ‘accidentally’ buying GMO sugar beet seed. GMO sugar beet seed is not sold to home gardeners, they are only available to commercial farmers in bulk. So if one wanted to buy some GMO beet seed, you would have to buy a 50lb bag of it (for more info see Fear Free Garden Seeds).

Here is the process I used: Once pulled, I cut the greens off and saved the ones we wanted to eat in the fridge, then I put the greens that were going to the chickens and livestock in a separate bucket. I scrubbed all the beats really well with a stiff bristle brush. When canning beets, you are supposed to boil and peel them first. However, I was not canning these beets wanted to use as much of the beet as possible so I did not peel them. 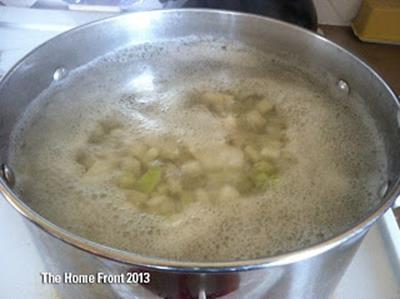 Next I chopped them up by hand into tiny cubes. I have also heard that using your food processor to shred them works well. Then I added them to a big stock pot and added just enough water to cover them up. I set them to boil for an hour. Your goal here is to extract as much sugar as possible through cooking them so you actually want them to end up all mushy. It was recommended to me that I cook them for 30-45 minutes, but I ended up cooking them for over an hour. 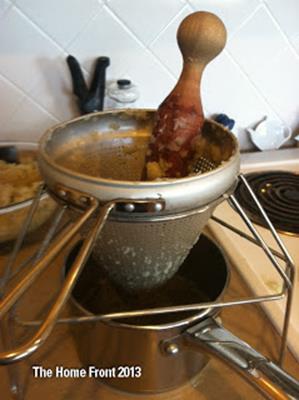 Then you need to strain the beet pulp from the liquid and transfer the liquid into a different pot. I read that traditionally a cheese cloth bag was used for straining then you twist it and wring it out to extract as much liquid as possible. I found using a manual food mill helped move this process along a little faster. I mashed the beets in the mill and collected the liquid below. I stopped short of ricing them, as I didn’t want all of the beet pulp to end up in the pot. This remaining liquid was then run through a jelly bag to remove any remaining chunks of plant matter. If you don’t remove all the beet pulp – it will not store well. 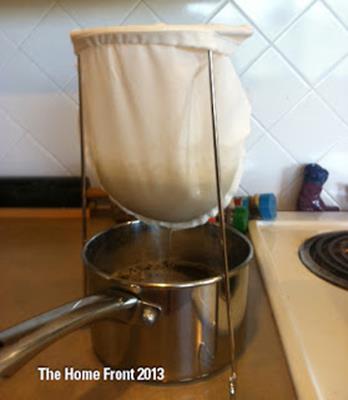 The next step is cooking the liquid down. I was told that ‘back in the day’ they would reduce it down until crystals formed. I have found no guide on how much you are to reduce the liquid by or for how long to reduce the liquids. On that note, I was also told that at the time, most people did not have enough patience for crystallized sugar and would instead make beet ‘syrup’ and use the syrup in place of dry sugar. So with the goal of syrup in mind I brought my beet liquid up to a boil and started reducing, and reducing, and reducing the liquid. 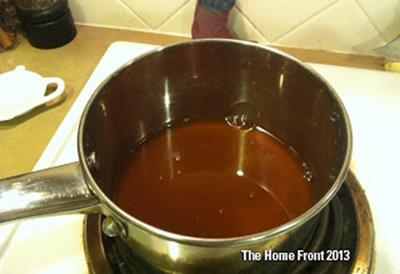 After several hours, I was left with a small amount in one of my smallest pots. Now I was very suspicious of this because I could still smell the ‘beets’ and it still seemed watery, but when I tasted it – it was wonderful! It had a rich sweet syrupy flavor. So I continued boiling until I could see some ‘sheeting’ action with the syrup. “Sheeting” is what happens when you pour a little bit of the syrup out of the pot or a ladle and instead of it just pouring out like water, it starts to spread out, stick, and stiffen up a little. It may look like a little sheet of syrup trying to cling to the pot. This is also how to tell if maple syrup is ready for a hydrometer test.

Before a hydrometer was commonly used, once the syrup started sheeting it was ready. A hydrometer reading will tell you what the sugar content is for the syrup, it has to be done at a specific temperature and would take another complete article to explain. I didn’t bother with a hydrometer test as I am not selling my syrup and therefore had no desire to grade it, once it started sheeting it was good enough for me to consume.

Now, at this point if you wanted, you could take your syrup to 40°F – 45°F above the boiling temperature of water at your elevation (a candy thermometer is handy for this, may I suggest a non-digital one) – if it foams you can skim the foam off, or add a drop or two of vegetable oil. Basically what you are doing is making hard rock candy, so if you have ever made candy before: you are taking the sugar syrup to the “hard crack stage” (click link for more info). Then move it to a large flat pan continuously stirring until all moisture is gone. Later after it has cooled and hardened you can use a screen or a grater to grate down the hardened mass to a finer sugar like powder. 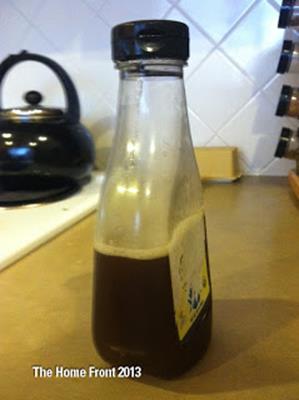 Sadly, I didn’t end up with much syrup for all of my work. I understand now why each family grew so many sugar beets. I stuck the less than half full bottle of sugar beet syrup in my fridge and used it in my coffee, on my pancakes, and in smoothies for the rest of the summer. It always added a nice flavor. I am afraid if I had boiled it down to crystals I would not have had much to show for myself, however, if storage is your goal, crystals are the way to go.

My grandma told me that while the syrup they had never went bad, it was not uncommon for some mold to collect on the top of the syrup. To fix this they would just scoop it off with a spoon and bring the syrup back up to a boil for a few minutes again and it was good to go, however I don’t think I will be trying that unless I have to, so for now I will just use the fridge. 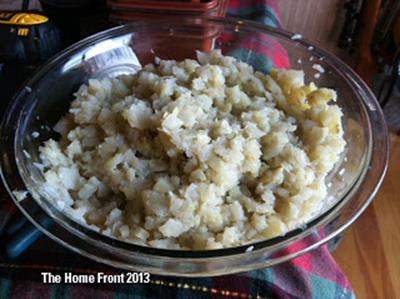 The nice thing about this process is how little waste is produced and how usable every part of the sugar beet is! The beet pulp from cooking the beets went to the chickens and they LOVED it, but people can eat that too. The greens and tops went to both the livestock , chickens, and of course to us. The greens are completely edible – dehydrated and stored for later use in soups or Quiche or you can cook them up like collared greens. Collard greens, in one form or another, have been prepared by humans for 2000 years and were originally a survival food. They are a very good source of vitamin C, soluble fiber, and other good stuff . Here is a quick recipe I used, while not completely traditional – they sure did taste pretty good! 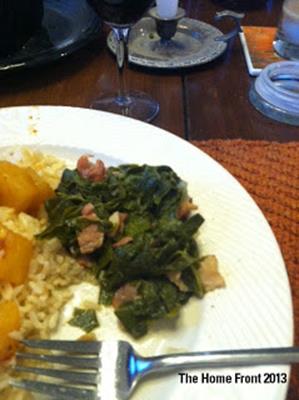 Wash the greens thoroughly. Remove the thick stems that run down the center. Don’t worry about doing this to the small tender leaves. Stack 6 or 7 leaves on top of each other, roll them up, and slice them at one inch increments. Next, chop your bacon up into one or two-inch pieces and add it to a stock pot over medium heat. Once it begins to cook, add the garlic to the pot and cook the garlic in the bacon grease until it starts to look translucent.

At this point add the chicken broth and simmer for 20 minutes. Then add your greens to the mix and cook for them for 30 – 45 minutes ( I have found that you don’t need to cook beet greens as long as turnip greens or kale), add your salt and pepper and adjust seasonings according to your taste. Then drain your greens and serve. (Be sure to reserve the liquid, it can be used later for re-heating left over greens as they just don’t play well with microwaves.) Also I have been told by my friend who live in the South that you can save that broth which they call a collard ‘liquor’ and use is in further cooking or to sip on when you have a cold or flu. It is full of essential vitamins and minerals including iron and vitamin C. Especially important is that it contains a lot of vitamin K, which aids in blood clotting.

So there you have it. My ongoing experience with sugar beets.

By Stephanie Dayle Via – The American Preppers Network