In Iraq, I raided insurgents. In Virginia, the police raided me. 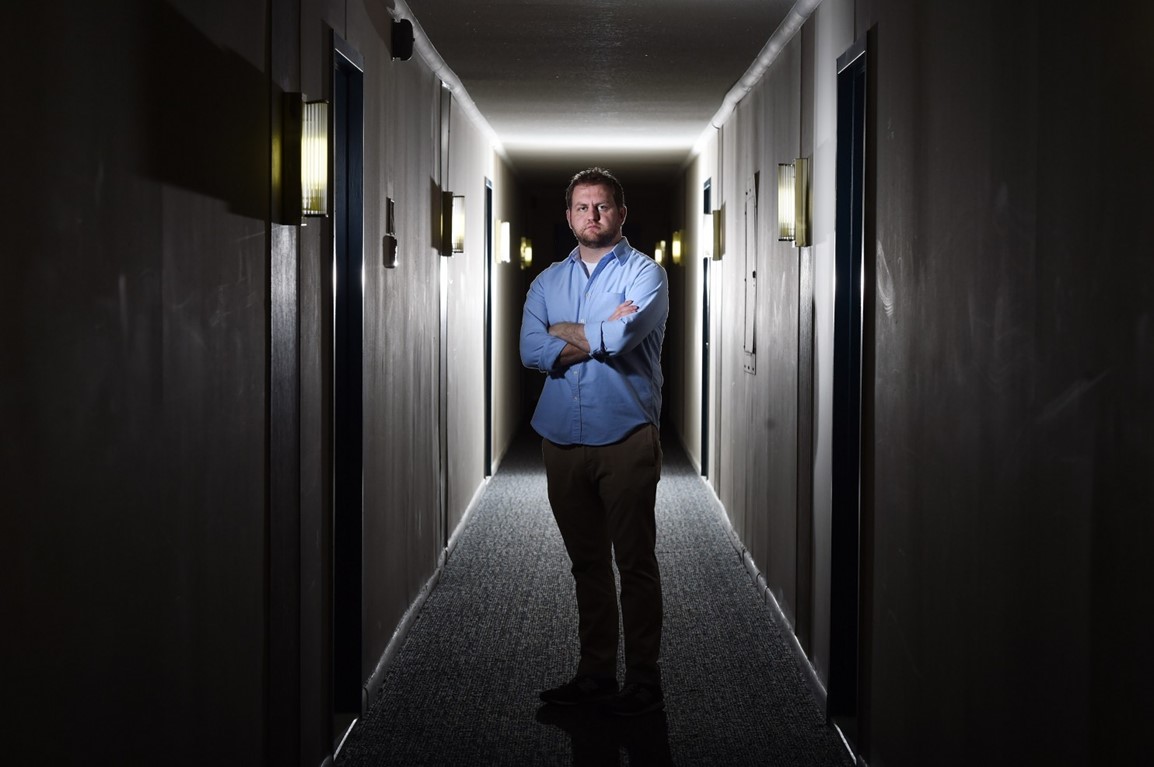 Alex Horton, 30, poses in the hallway outside his apartment on Thursday July 16, 2015 in Alexandria, VA.

An Iraq War veteran, Horton was recently awoken by a police raid as he slept.

Alex Horton is a member of the Defense Council at the Truman National Security Project. He served as an infantryman in Iraq with the Army’s 3rd Stryker Brigade, 2nd Infantry Division.

I got home from the bar and fell into bed soon after Saturday night bled into Sunday morning. I didn’t wake up until three police officers barged into my apartment, barking their presence at my door. They sped down the hallway to my bedroom, their service pistols drawn and leveled at me.

It was just past 9 a.m., and I was still under the covers. The only visible target was my head.

In the shouting and commotion, I felt an instant familiarity. I’d been here before. This was a raid.

I had done this a few dozen times myself, 6,000 miles away from my Alexandria, Va., apartment. As an Army infantryman in Iraq, I’d always been on the trigger side of the weapon. Now that I was on the barrel side, I recalled basic training’s most important firearm rule: Aim only at something you intend to kill.

I had conducted the same kind of raid on suspected bombmakers and high-value insurgents. But the Fairfax County officers in my apartment were aiming their weapons at a target whose rap sheet consisted only of parking tickets and an overdue library book.

My situation was terrifying. Lying facedown in bed, I knew that any move I made could be viewed as a threat. Instinct told me to get up and protect myself. Training told me that if I did, these officers would shoot me dead.

In a panic, I asked the officers what was going on but got no immediate answer. Their tactics were similar to the ones I used to clear rooms during the height of guerilla warfare in Iraq. I could almost admire it — their fluid sweep from the bedroom doorway to the distant corner. They stayed clear of one another’s lines of fire in case they needed to empty their Sig Sauer .40-caliber pistols into me.

They were well-trained, their supervisor later told me. But I knew that means little when adrenaline governs an imminent-danger scenario, real or imagined. Triggers are pulled. Mistakes are made.

I spread my arms out to either side. An officer jumped onto my bed and locked handcuffs onto my wrists. The officers rolled me from side to side, searching my boxers for weapons, then yanked me up to sit on the edge of the bed.

At first, I was stunned. I searched my memory for any incident that would justify a police raid. Then it clicked.

Earlier in the week, the managers of my apartment complex moved me to a model unit while a crew repaired a leak in my dishwasher. But they hadn’t informed my temporary neighbors. So when one resident noticed the door slightly cracked open to what he presumed was an unoccupied apartment, he looked in, saw me sleeping and called the police to report a squatter.

Sitting on the edge of the bed dressed only in underwear, I laughed. The situation was ludicrous and embarrassing. My only mistake had been failing to make sure the apartment door was completely closed before I threw myself into bed the night before.

I told the officers to check my driver’s license, nodding toward my khaki pants on the floor. It showed my address at a unit in the same complex. As the fog of their chaotic entry lifted, the officers realized it had been an unfortunate error. They walked me into the living room and removed the cuffs, though two continued to stand over me as the third contacted management to confirm my story. Once they were satisfied, they left.

When I later visited the Fairfax County police station to gather details about what went wrong, I met the shift commander, Lt. Erik Rhoads. I asked why his officers hadn’t contacted management before they raided the apartment. Why did they classify the incident as a forced entry, when the information they had suggested something innocuous? Why not evaluate the situation before escalating it?

Rhoads defended the procedure, calling the officers’ actions “on point.” It’s not standard to conduct investigations beforehand because that delays the apprehension of suspects, he told me.

I noted that the officers could have sought information from the apartment complex’s security guard that would have resolved the matter without violence. But he played down the importance of such information: “It doesn’t matter whatsoever what was said or not said at the security booth.”

This is where Rhoads is wrong. We’ve seen this troubling approach to law enforcement nationwide, in militarized police responses to nonviolent protesters and in fatal police shootings of unarmed citizens. The culture that encourages police officers to engage their weapons before gathering information promotes the mind-set that nothing, including citizen safety, is more important than officers’ personal security. That approach has caused public trust in law enforcement to deteriorate.

It’s the same culture that characterized the early phases of the Iraq war, in which I served a 15-month tour in 2006 and 2007. Soldiers left their sprawling bases in armored vehicles, leveling buildings with missile strikes and shooting up entire blocks during gun battles with insurgents, only to return to their protected bases and do it all again hours later.

The short-sighted notion that we should always protect ourselves endangered us more in the long term. It was a flawed strategy that could often create more insurgents than it stopped and inspired some Iraqis to hate us rather than help us.

In one instance in Baghdad, a stray round landed in a compound that our unit was building. An overzealous officer decided that we were under attack and ordered machine guns and grenade launchers to shoot at distant rooftops. A row of buildings caught fire, and we left our compound on foot, seeking to capture any injured fighters by entering structures choked with flames.

Instead, we found a man frantically pulling his furniture out of his house. “Thank you for your security!” he yelled in perfect English. He pointed to the billowing smoke. “This is what you call security?”

We didn’t find any insurgents. There weren’t any. But it was easy to imagine that we forged some in that fire. Similarly, when U.S. police officers use excessive force to control nonviolent citizens or respond to minor incidents, they lose supporters and public trust.

That’s a problem, because law enforcement officers need the cooperation of the communities they patrol in order to do their jobs effectively. In the early stages of the war, the U.S. military overlooked that reality as well. Leaders defined success as increasing military hold on geographic terrain, while the human terrain was the real battle. For example, when our platoon entered Iraq’s volatile Diyala province in early 2007, children at a school plugged their ears just before an IED exploded beneath one of our vehicles. The kids knew what was coming, but they saw no reason to warn us. Instead, they watched us drive right into the ambush. One of our men died, and in the subsequent crossfire, several insurgents and children were killed. We saw Iraqis cheering and dancing at the blast crater as we left the area hours later.

With the U.S. effort in Iraq faltering, Gen. David Petraeus unveiled a new counterinsurgency strategy that year. He believed that showing more restraint during gunfights would help foster Iraqis’ trust in U.S. forces and that forming better relationships with civilians would improve our intelligence-gathering. We refined our warrior mentality — the one that directed us to protect ourselves above all else — with a community-building component.

My unit began to patrol on foot almost exclusively, which was exceptionally more dangerous than staying inside our armored vehicles. We relinquished much of our personal security by entering dimly lit homes in insurgent strongholds. We didn’t know if the hand we would shake at each door held a detonator to a suicide vest or a small glass of hot, sugary tea.

But as a result, we better understood our environment and earned the allegiance of some people in it. The benefits quickly became clear. One day during that bloody summer, insurgents loaded a car with hundreds of pounds of explosives and parked it by a school. They knew we searched every building for hidden weapons caches, and they waited for us to gather near the car. But as we turned the corner to head toward the school, several Iraqis told us about the danger. We evacuated civilians from the area and called in a helicopter gunship to fire at the vehicle.

The resulting explosion pulverized half the building and blasted the car’s engine block through two cement walls. Shrapnel dropped like jagged hail as far as a quarter-mile away.

If we had not risked our safety by patrolling the neighborhood on foot, trusting our sources and gathering intelligence, it would have been a massacre. But no one was hurt in the blast.

Domestic police forces would benefit from a similar change in strategy. Instead of relying on aggression, they should rely more on relationships. Rather than responding to a squatter call with guns raised, they should knock on the door and extend a hand. But unfortunately, my encounter with officers is just one in a stream of recent examples of police placing their own safety ahead of those they’re sworn to serve and protect.

Rhoads, the Fairfax County police lieutenant, was upfront about this mind-set. He explained that it was standard procedure to point guns at suspects in many cases to protect the lives of police officers. Their firearm rules were different from mine; they aimed not to kill but to intimidate. According toreporting by The Washington Post, those rules are established in police training, which often emphasizes a violent response over deescalation. Recruits spend an average of eight hours learning how to neutralize tense situations; they spend more than seven times as many hours at the weapons range.

Of course, officers’ safety is vital, and they’re entitled to defend themselves and the communities they serve. But they’re failing to see the connection between their aggressive postures and the hostility they’ve encountered in Ferguson, Mo., Baltimore and other communities. When you level assault rifles at protesters, you create animosity. When you kill an unarmed man on his own property while his hands are raised — as Fairfax County police did in 2013 — you sow distrust. And when you threaten to Taser a woman during a routine traffic stop (as happened to 28-year-old Sandra Bland, who died in a Texas jail this month), you cultivate a fear of police. This makes policing more dangerous for everyone.

I understood the risks of war when I enlisted as an infantryman. Police officers should understand the risks in their jobs when they enroll in the academy, as well. That means knowing that personal safety can’t always come first. That is why it’s service. That’s why it’s sacrifice.