Check out this alert from http://threatjournal.com/

Rebels from the Islamic State in Iraq and Syria (ISIS) (AKA Islamic State of Iraq and the Sham, AKA Islamic State of Iraq and the Levant – ISIL), a jihadist group so completely lunatic and out of control that they were actually expelled from Al Qaeda’s global network in February of this year, have overrun Iraqi government forces and now control major swaths of territory equating to about 1/4 to 1/3rd of the country. Included in this area is Mosul, Iraq’s second-largest city with a population of over 1.5 million, as well as Tikrit, Saddam Hussein’s former hometown. As of the time of this reports preparation late Friday, ISIS rebels had advanced to within 30 miles of the capital of Baghdad.

UK media outlets are reporting that roads in the conquered areas are lined with the bodies of executed and beheaded police and soldiers and that thousands of others have been taken prisoner (see videos here and here).

The massive U.S. Embassy is Baghdad is executing plans for a possible evacuation and hundreds of non-essential personnel, contractors and U.S. military advisers have already left the country, with more on the way.

The Turkish consulate in Mosul was also overrun with more than 3 dozen diplomats and embassy workers kidnapped. Turkey, a NATO member, has called for an emergency meeting of the alliance and the U.S. has offered military assistance to help Turkey recover the staff. The Turkish parliament has given their military authorization to conduct unlimited military operations in the country until at least October.

On Thursday of this week Sen. Lindsey Graham of South Carolina called for U.S. air strikes on ISIS rebels and urged the Obama administration to immediately withdraw U.S. embassy staff in Baghdad to prevent “another Benghazi incident. Senator Graham made his appeal moments after he left a top-secret Senate Armed Services Committee briefing within which he was told information about the extremists that he says “scared the hell” out of him. 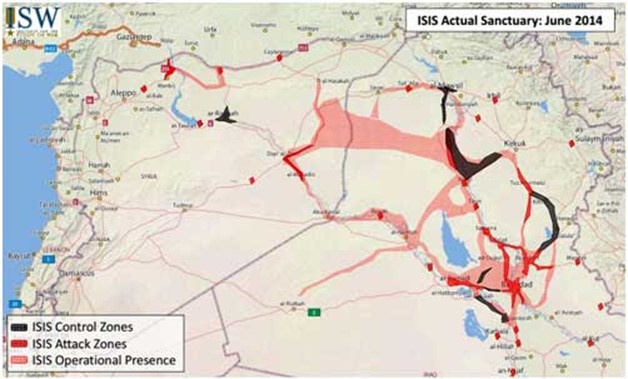 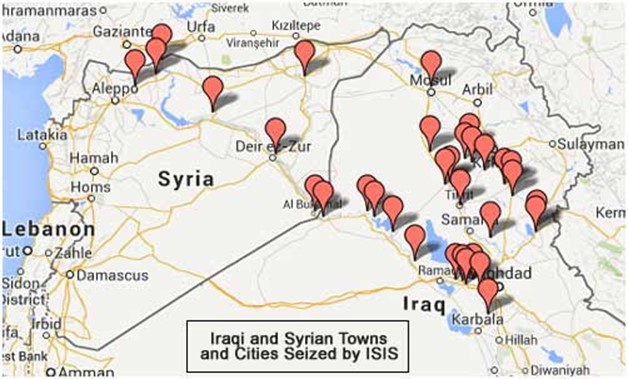 Perhaps it is within this briefing that he learned that along with overrunning a number of Iraqi military bases and installations, ISIS rebels also took control of massive arms depots containing all manner of offensive weaponry stockpiled by the U.S. for the new Iraqi army, reportedly including a number of Blackhawk and Kiowa helicopters, personnel and equipment transports and more.

This may also be briefing where he received further confirmation that many of the ISIS rebels on the offensive in Iraq were actually trained and equipped by the U.S. over the last several years for the proxy war being fought in Syria.

“I will work with Congress to ramp up support for those in the Syrian opposition [ i.e. rebels ] who offer the best alternative to terrorists and brutal dictators…”

And in a stunning development, late this week the government of Iran offered to partner with the U.S. in helping Iraq fight back. Iranian officials have told Reuters that the country will send advisers and weaponry, but probably not troops, though there are already widespread reports of several battalions of Iranian troops already on the ground.

Friday afternoon President Obama stated that the United States “will not be sending U.S. troops back into combat in Iraq,” but that he would be reviewing a range of other options to support the Iraqi government against a sweeping advance by militant fighters. He went on to say that any decision on U.S. military support for Iraq “is going to take several days,” adding that “this is not going to happen overnight.” Within minutes of his announcement, sources within the defense community indicated that U.S. air strikes could start as soon as Saturday.

AlertsUSA Threat Journal warns readers that this situation will likely dramatically worsen in the coming weeks as fighting spreads and more Islamists pour into the country from across the region. Currently the conflict involves extremely well armed, well funded rebel fighters clashing with and military units from Syria, Iraq and Iran. This week ISIS issued direct threats to attack Jordan and fighting in Syria has already encroached on the border of Israel.

One thing is for certain: It highly unlikely that the U.S. and NATO, not to mention other regional countries, are going to sit idly by and let Iraq, particularly with it’s 5th largest oil and gas reserves in the world, slip permanently out of reach.

AlertsUSA
continues to monitor developments in the region and will immediately notify service subscribers of changes in the overall threat environment, or additional U.S. involvement, as events warrant.

OTHER ALERTS ISSUED THIS WEEK

6/9 Iranian officials publicly warn US that military base @ Diego Garcia now within range of ballistic missiles and will be targeted if country comes under attack.

* Be One Of The First To Know When The SHTF.
* Get Away Early, Give Your Family Extra Safety.
* In Wide Use By Gov, 1st Responders, Travelers.
* 24/7/365 Monitoring. No Hype. Just the Bad Stuff
* Issued Hours and Days before the MSM.
* On your Cell Phone, Tablet or Email.
* We Give The Clear Truth, Unlike the MSM.
* Over a Decade in Operation!